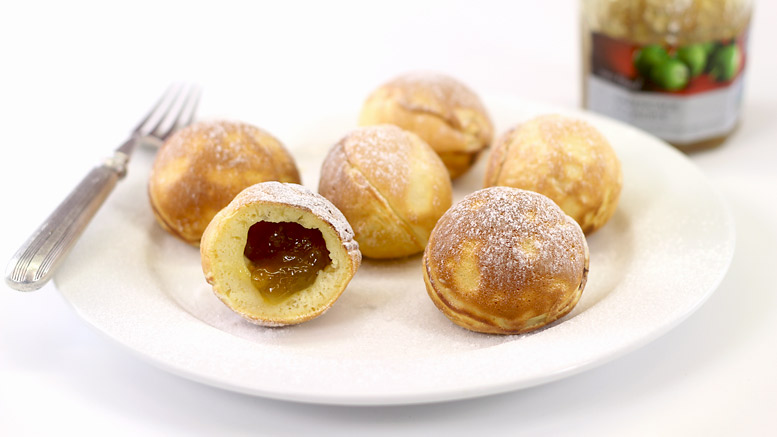 Aebleskivers Using An Apple Jam In The Centre

Æbleskiver are spherical ‘pancakes’ and their Danish name means apple slices – this comes from being made traditionally with a slice of apple put in the middle when baking. In shape and form they look like a small doughnut, however they are a very specialised and regional pancake dish to Scandinavia, and particularly to the Danes – they were also commonly eaten on the Shetland Islands, and are slowly spreading to other parts of Britain.

This recipe uses a buttermilk pancake batter, (there does not seem to be one definitive batter for making traditional Æbleskiver, just like there is no one type of batter to make pancakes) and instead of an apple slice we are adding in an Apple Jam – with the taste of apple you may want to add in a little ground cinnamon to the batter.  In terms of adding the jam you can add the apple jam when baking them, spooning it in as we do, or you can make the aebleskiver’s first (leaving them hollow) then using a piping bag, with a long nozzle, you can pipe the apple jam into the centre (which is easier to do). You can of course make these traditionally by putting in a little piece of fresh apple instead of the jam.

The frying pan to make these intense and roundly compact ‘pancakes’ is very specialised, and it is essential to make Aebleskivers. It has several small half-spheres, where the cooked batter is ‘turned’ a quarter turn, and as each part of the sphere batter becomes solidified, the full sphere is made. 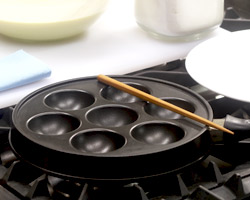 Some people rush the turning of the spheres, which is why they turn out like a fat discus, to get them round you must be patient and make four complete turns (pulling up in adjacent directions) rather than just two or three turns, even to the point of adding in a little extra batter half way through if necessary – which is why it is easier to pour from the spout of a jug than use a ladle from the bowl. You can brown them off once the sphere is made by spinning them around in the pan for as long as you want, which helps cook the interior.

Make Your Own Apple Jam or Apple Preserve

To make the batter: sieve the flour, baking powder, and salt all into a large mixing bowl – make a well in the middle. Whisk the buttermilk, milk and melted butter together in another bowl. Pour the beaten eggs into the middle of the flour well, followed by several tablespoons of the buttermilk mixture.

Gently and gradually start to mix the flour into the wet ingredients – whisk from the edges working your way in to the middle, making a thick but smooth paste. At this point slowly start to add the rest of the buttermilk mixture, adding just a little at a time, and whisking thoroughly between each addition, until you have a smooth and lump free batter. Finally whisk in the caster sugar (and ground cinnamon if adding). Allow the batter to rest in the fridge for an hour. It is easier to pour the batter from a jug into the spheres than using a ladle.

To make the aebleskivers: using a little sunflower oil, and a cloth or brush, lightly coat each half-sphere of the non-stick Aebleskiver pan. Put the pan on to heat, until the oil is hot, then fill each sphere with the batter almost to the top (just a few millimetres shy as the batter rises as they heat). Allow the base of the batter to become solidified, check to see if one is loose by using a wooden chop-stick to pull it up. If it moves easily then they are ready to move, if it sticks a little then leave it another minute. 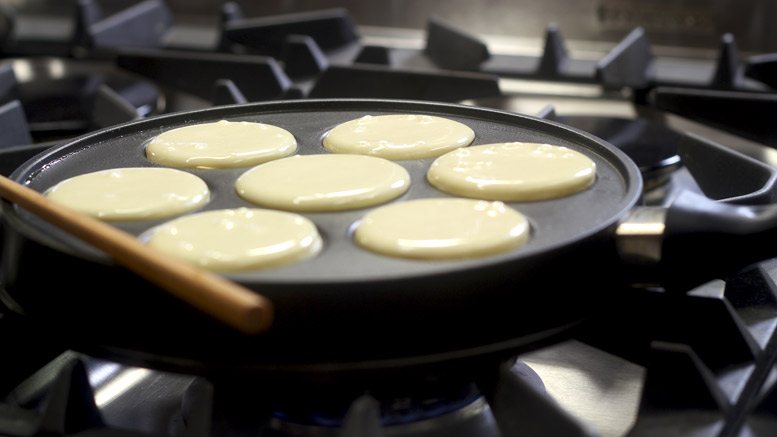 Making The Aebleskivers - Pour In The Batter

For the first turn move all the spheres up a quarter of a turn each. To turn them push the sharp end of the chop-stick into the top of each sphere, just below the surface and pull upwards, using the back of the pan as a guide, easing the batter sphere around. As you pull it gently up some of the liquid batter in the centre will run down to coat the bottom of the pan, and the round sphere will start to be made. 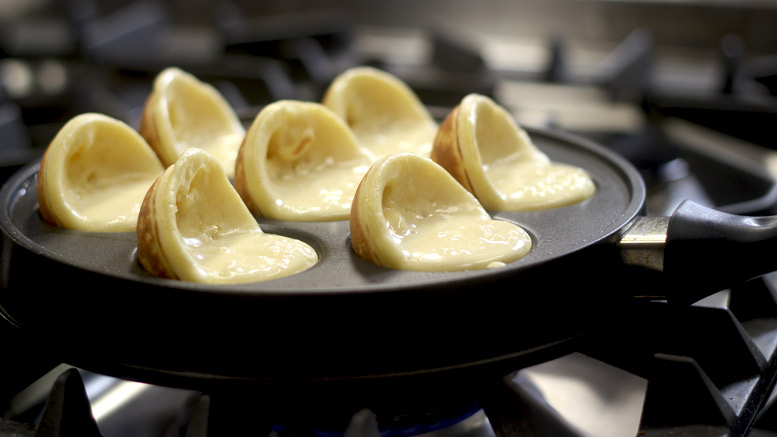 With a hot pan you don’t have to wait too long, just until each segment is a little browned and stiffened – by waiting too long the central batter, which we need to remain liquid, will start to dry out and leave us with only a little batter left to complete the circle. If at the half way point you think you need to add a little extra batter to complete the circle, do so. You can brown each sphere off in the pan after the ball shape is made.

When ready make the next quarter turn, this time pulling up from an adjacent edge to the first one you first pulled up. At this point also put a small spoonful of apple jam in the centre of the balls or an apple slice (or any other filling). Then let the base of the sphere brown off a little. 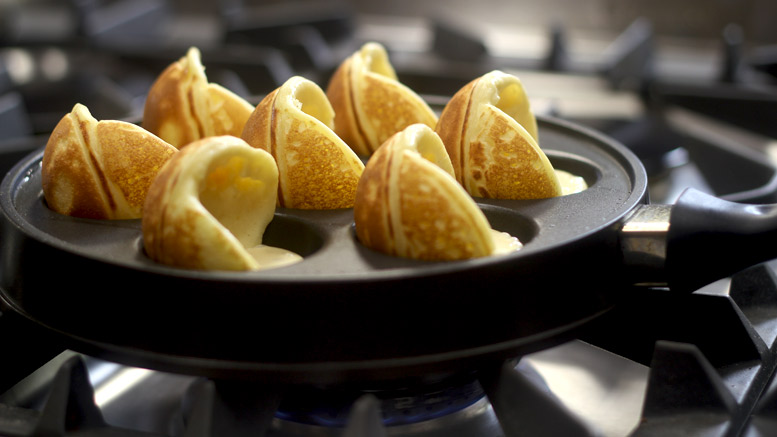 When ready make the next quarter of a turn, pulling up a different side, then wait to make the last turn, closing the sphere – you might need to add a little extra batter or tuck the edges in a little on the last turn – use the chop-sticks to push the seams together to close the spheres if necessary. Once the ball is made you can gently and carefully (so as not to open up the seam and let the jam out) start to brown each Æbleskiver off by turning it in the pan spheres and make it into a rounder shape. 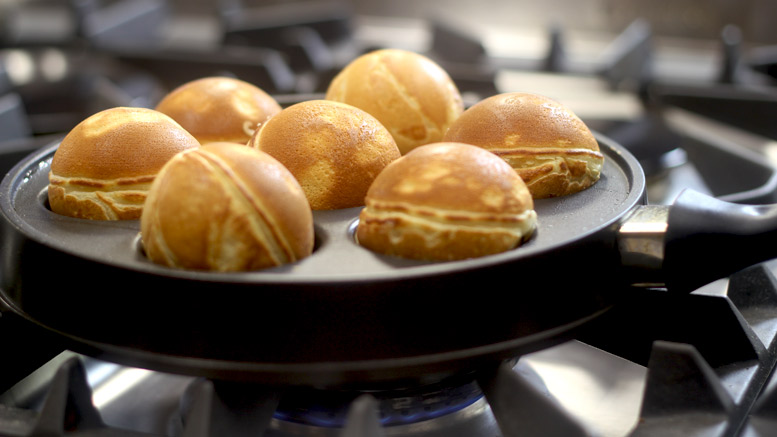 Making The Aebleskivers - Finish The Sphere And Brown Off

Once browned and cooked through (so there is very little raw batter left in the centre) they should be carefully rolled on a plate with sugar on it or sprinkled with icing (powdered) sugar. Let them cool down a bit (the jam in the centre will be hot!) and eat them warm.