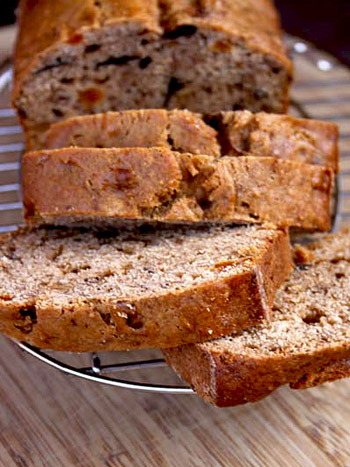 Bara Brith, translated as ‘Speckled Bread’, is a famous traditional Welsh recipe, although it must be noted that there are now two different types, using different baking methods and recipes – one is a a yeast bread, enriched with dried fruit, (commonly raisins, currants and candied peel) while the other is more like a fruit cake, and is made with self-raising flour, or by using bicarbonate of soda.

A Bara Brith in Wales is often cut into thick slices and spread with butter, when fresh, or toasted and spread with jam, if a few days old, while in the summer it was in the past commonly soaked in buttermilk and served as a bread pudding, Bara Llaeth Wedi’i Grasu.

Making a bara brith with yeast, as you would a bread, is the most traditional and oldest of all the recipes. The original Bara Brith was made in Welsh homes by adding a handful of dried fruit into the last bread dough of the day (on a bread baking day) and then after baking it was coated in honey, for a luxury baked item.

However, in the late 1800s  baking powder, self raising flour, and bicarbonate of soda became far more common in homes, making it possible to make cakes and breads rise without the need for yeast – cutting baking times and the fuss and mess from using yeast – and these ingredients found their way into a Bara Brith.

These later versions of Bara Brith are more like a ‘cake’ (now the most traditional types baked in South Wales) and are the ones most often sold in shops, due to having a longer shelf-life and being easier to bake.

This cake-like Bara Brith is also still popular in Argentina today after being brought to the country by Welsh immigrant settlers who arrived in the Chubut province in 1865 – in Argentinian Bara Brith is known as torta negra (black cake).

Tea or not tea? The people of North Wales tend to soak the fruit in tea overnight, the South do not. Either way is acceptable, but by soaking the dried fruit first it will draw less moisture out of the cake during baking. Make a simple tea in one cup, (without milk) pour it warm all over the dried fruit in a bowl and leave for a few hours or over-night.

Butter or Lard? Some recipes recommend lard others butter, (a few beef ‘dripping’) each choice gives a slightly different taste to the Bara Brith. In Welsh households, in the nineteenth and twentieth centuries, the choice would be down to individual preference, ‘what was to hand’, and, importantly, the budget of each household.

Below are some regional variations on the Welsh Bara Brith recipe both made with and without yeast. Within the original recipes we have converted the weights and measures to modern ones, these appear in the brackets next to the old measurements. Each region within Wales, and very nearly each household, had its own Bara Brith recipe, this collection represents the most popular ones, dating from the late 1800s and into the early 1900s.

Method: Mix the yeast with the warm milk and leave to stand in a warm place for 10 minutes until it has become frothy. In a large mixing bowl sift in the flour and rub the softened butter into it until it resembles fine breadcrumbs. Stir in the sugar, raisins, currants, candied peel, spice and salt. Make a well in the centre and add the yeast and the well beaten eggs. Mix together into a soft dough (add extra flour if necassary) and cover and leave in a warm place for three hours to double in size. Turn out onto a floured work space and knead well. Shape into a long loaf and place on a greased baking tray. Use a sharp knife to make three long cuts in the top of the dough and allow to rise for another 30 minutes. Bake in a hot oven (200C) for 1 hour to 1 and a 1/2 hours (60 to 90 minutes) or until golden brown and the bread sounds hollow when you tap the base. When baked place on a wire rack and while still warm brush with warm honey to glaze.

Mix the fat well into the flour, add dry ingredients. Mix carbonate of soda into the buttermilk, add it to the treacle and beaten egg, mix well together, put into bread tin and bake in moderate oven for 1 and 3/4 to 2 hours.

Researched and published for the National Museum of Wales: Welsh Folk Museum

Method: Put the flour in a mixing bowl and allow to stand in a warm place for a while. Rub the butter into the flour, add all the other dry ingredients and mix thoroughly. Cream the yeast with a little sugar in a smaller basin and blend it with half a cupful or warm milk. Make a well in the centre of the dry ingredients, pour the yeast mixture into it and sprinkle a little flour over it. Cover and allow to stand in a warm place for a few minutes. Beat the eggs, pour them on the yeast mixture and proceed to knead the ingredients to a soft dough. Melt the treacle in a little warm water and gradually add it to the dough, as required, when kneading. Cover the bowl and allow the dough to rise for an hour and a half in a warm place. Then turn out on to a well floured board, divede it in equal parts and put into warm greased tins. Bake the loaves in a moderately hot oven for an hour and a half.

Bara Brith (made without yeast)

‘A Taste OF Wales’ By Theodora Fitzgibbon Published In 1971

From a recipe of Mrs Moir, of Lake Vyrnwy Hotel

Method: Mix the dried fruit and sugar together and pour the warm, milkless tea over then leave to stand overnight or for some hours until the fruit is swollen up. The next day stir in the flour, spice, marmalade and finally the well-beaten egg. Line a loaf tin with greased paper, put the mixture in and cook in a moderate oven (325 F) for 1 and 3/4 hours. Turn out onto a wire rack when cooked and brush with warm honey to glaze.

Method: Sieve the flour and salt on to a working surface or mixing bowl. Rub in the lard and make a well in the centre. Mix the sugar and spice together and put in the well. Combine the beaten egg with the warm water and use 3 tablespoons of it to mix the yeast into a smooth, thin paste, then stir in the rest of the liquid. Pour over the sugar in the well, mix vigorously to blend, then knead well to make a smooth, elastic dough. Mix together the currants, sultanas and peel and knead lightly into the dough. Mould the dough into a round or long shape, as you prefer, and put on a greased baking sheet or in a greased 2 lb. loaf tin. Cover and put in a warm place to rise for 1 and 1/2 hours. Bake in the pre-heated oven (180C) for 35 minutes.

Alternatively Bara Brith was eaten in the summer with buttermilk …

A slice of toasted Bara Brith is placed in a bowl with buttermilk poured over it, this is then placed in a warm oven to heat through and soak up the buttermilk. It can be served hot or cold, like a bread pudding: “Although served only during very hot spells in some districts, it was a dish eaten regularly for supper all through the summer in other areas. It would be also carried in ‘cans’ and served as a snack to the harvesters out on the fields”, S. Minwel Tibbott, ‘Welsh Fare’ (1976).