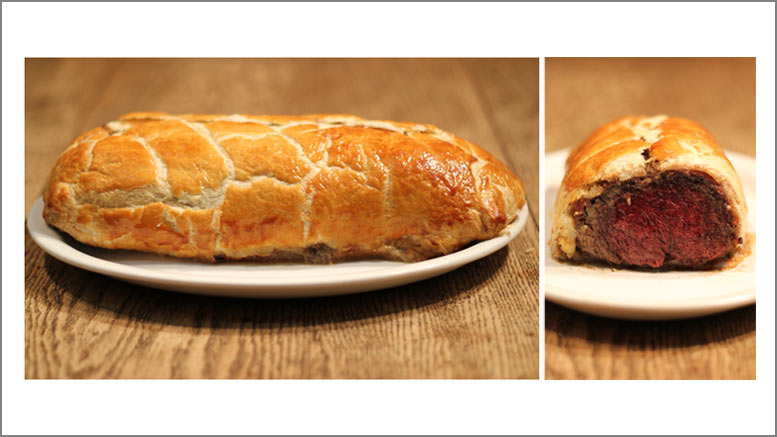 The culinary history of Beef Wellington is a bit of a mystery, with far too many theories, (and all of them lacking in any hard evidence) to put this dish any earlier than the 20th Century – it certainly does not appear in any Victorian recipe books. So ignoring for now the myths surrounding this recipe we should instead concentrate on making it.

It is a classic dish which can be served at any time of the year, in any company, but in a number of households (including mine) Beef Wellington is the annual dish most looked forward to at a Christmas Dinner, served with a Goose or Turkey, harking back to a day when beef was one of the main seasonal Christmas meats. “I urged to the good lady that this was Christmas-eve; that Christmas comes but once a year … It was settled that at nine o’clock that night a Turkey and a piece of Roast Beef should smoke upon the board …” Charles Dickens, ‘The Seven Poor Travellers’ (1854).

Talk To Your Butcher. Buying A Fillet Of Beef: Put your order in a few days beforehand and ask your butcher for the middle of the central column of a beef fillet which has been aged, which will be the same thickness down the length of it, (rather than the fatter ends) if you say it is for a Beef Wellington he / she will understand immediately what you need – note: with the best (aged) beef fillets they are so tender you can tear pieces off it like paper when raw.

Enough for 3 or 4 people depending on the size and thickness of your fillet of beef and what you are serving with it. The one in the recipe photos, at 613 grammes, is enough for 4 people served with seasonal vegetables.

Ingredients For A Beef Wellington

Just before sealing in the frying pan rub into the beef fillet the salt and pepper. Heat some oil in a large pan and quickly fry the seasoned beef all over (including the ends) until it’s brown. Remove and allow to cool. The point of this is simply to sear the beef and seal all those juices in, you don’t want to cook the meat at this stage. When cooled brush generously all over with the thick paste of English mustard.

De-stalk and roughly chop both types of mushrooms, put them in a bowl and use a stick (hand) blender to blitz them into a puree, (add a tbsp of red wine if it is needed to blend the mushrooms if they are proving difficult) then mix and add some thyme leaves. Scrape the mixture into a hot, dry frying pan and allow any moisture or water to evaporate. When sufficiently dry (the mixture should be sticking together easily), put the pureed mushrooms back in the bowl and reserve.

Sealing The Meat And Making The Mushroom Duxelles

In the frying pan add a little butter and fry the finely chopped onion until soft and golden, add the mushroom puree back in, with the red wine, a small amount of double cream, and a few more thyme leaves; add in a little sea salt and black pepper to season – fry for another three or four minutes and mix thoroughly, making sure the mixture thickens and reduces into a rich paste – mushroom duxelles – set aside and cool.

Roll out a long length of cling film, lay out the five slices of Parma ham, (or slices of your own Dry Cured Ham) each one slightly overlapping the last. With a pallet knife spread the cooled onion and mushroom puree mixture evenly over the ham.

Place the beef fillet for the Beef Wellington in the middle and keeping a tight hold of the cling film from the outside edge, neatly roll the parma ham and mushrooms over the beef into a tight barrel shape. Twist the ends to secure the cling film. Refrigerate for 20 minutes, this allows the Wellington to set and helps keep the shape.

Wrapping The Beef Wellington In the Duxcelle And Parma Ham

Roll out the puff pastry quite thinly to a size which will fully cover your beef. Unwrap the meat from the cling film. Egg wash the edges of the pastry and place the beef in the middle. Roll up the pastry, cut any excess off the ends and fold neatly to the ‘underside’. Turnover and egg wash over the top of the Beef Wellington.

Wrapping The Beef Wellington In Pastry And Egg Washing

Place on a greased baking tray and bake the Beef Wellington at 200c for around 40 to 50 minutes. Note: depending on the size and thickness of the beef fillet, and if you prefer the meat well done, bake for 10 to 15 minutes longer. Rest 8 -10 minutes before slicing.

Serve hearty slices of the Beef Wellington alongside sautéed potatoes, roast potatoes, seasonal veg, and a red wine beef gravy (made from 150ml red wine, 1 tbsp tomato puree, seasoning, thyme leaves, 1 tbsp of plain flour and 300ml fresh beef stock, reduced down to a much thicker sauce by simmering for twenty minutes just under the boil).