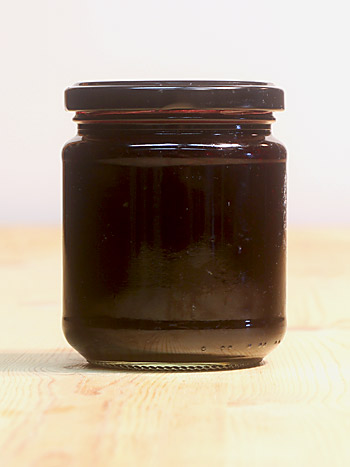 A Jar Of Blackberry Jam

Blackberry Jam is a real treat on toast or fresh bread in the mornings, it has a unique, and easily recognisable flavour amongst jams; with a sweet-sharp dance on the tongue and a deep, full berry taste. But very often blackberry jam is overlooked, due to the high amount of pips in the fruit, but these can either be strained out when the jam is boiling or sieved out when the jam is ready for potting. This really is a jam which should be made and utilised more often than it is.

To help the jam set we are adding in extra pectin from an apple – the recipe uses one brambley apple and a small amount of fresh apple juice. However, the amount of apple in relation to the blackberries is small, and in no way dominates or intrudes on the taste of the blackberries, making this a Blackberry Jam rather than an Apple and Blackberry jam.

If you are new to jam making you might want to read this post Jam And Preserve Making first, as it fully explains the main principles you will need to understand to make a great home-made jam. Also other great jam recipes can be found here, with over 30 different Victorian Jam Recipes, and once you get started on making jams there will be no stopping you.

Many recipes just say ‘boil until the jam sets when tried or tested’ experienced jam makers know exactly what this means: Spoon a little of the boiled preserve on to a cold plate, leave to cool for one minute, then push the preserve with a finger, if it has reached the setting point the top of the preserve should wrinkle with a skin. Using a thermometer: Most jams and marmalade’s reach a setting point once they have been boiled at 105C / 220F for 10 to 15 minutes. 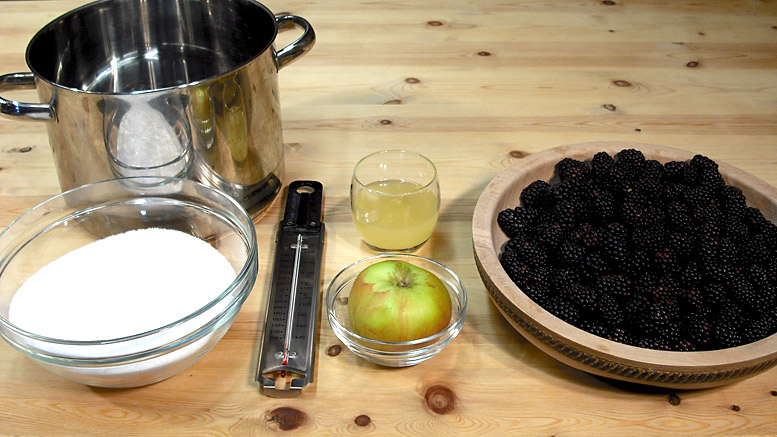 Prep: Pick through the blackberries and discard any that are too far gone and clean out anything that should not end up in the jam. Peel, core and chop the bramley apple up small.

Step 2: Add the blackberries to the pulped apple and apple juice in the preserving pan and simmer on a gentle heat for 30 minutes. Stir every so often so the blackberries soften and release their juice. After 30 minutes use the masher to once again pulp the fruit and break it up. It is at this point you can sieve the fruit juice, or let it strain through a ‘jelly bag’ over-night, to clear it of pips etc. (to make a clear jam) however I recommend making the jam as it is.

Step 3: Bring the fruit and juice up to the boil, stir, then take the pan off the heat and add in the sugar. Stir the sugar in until most of it has dissolved. Put the pan back on to the heat and bring it up to just under a simmering boil for 20 minutes. Stir occasionally and skim off any impurities or foam which rises.

Step 4: Once it has simmered for 20 minutes bring it up to a hard, rapid boil for ten minutes so that the jam thickens and the moisture evaporates out. After 7 minutes test the jam for its setting properties and again after 10 minutes. Turn off the heat if it is ready.

Once at the setting point pot the jam immediately into sterilized jars and seal. Store in a cool, dark place for up to 12 months.