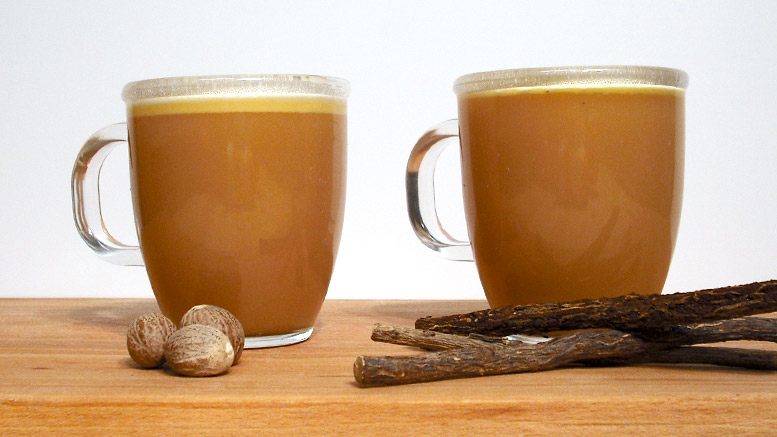 Two Types Of Buttered Beer From A 1664 Recipe

The first Buttered Beer recipe, written down by Robert May in 1664, has a liquorish taste to it which comes from using a stick of liquorish root, (easily available from any health food shop etc.) and some anise seeds. If you like liquorish then you will enjoy the taste of this Butter Beer recipe. The second Butter Beer recipe is far plainer in taste, and this recipe is very easy to drink on a cold winters night.

Tasting notes: these two are my favourite butter beer recipes, and certainly warming drinks which are excellent for a night cap: I really like the taste of liquorish and aniseed in the first recipe, and the second recipe is very drinkable, warm, with a little sweetness of nutmeg, and would be perfect as Robert May says, just before bedtime. If you are after an authentic alcoholic Butterbeer recipe, which is hundreds of years old, and you want to serve it to most people, then the second, simpler recipe, is the safest bet, but if you like liquorish then try the first one too.

From Robert May, ‘The Accomplisht Cook’, first published 1664

Take beer or ale and boil it, then scum it, and put to it some liquorish and anniseeds, boil them well together; then have in a clean flaggon or quart pot some yolks of eggs well beaten with some of the foresaid beer, and some good butter; strain your butter’d beer, put it in the flaggon, and brew it with the butter and eggs

Boil beer or ale and scum it, then have six eggs, whites and all, and beat them in a flaggon or quart pot with the shells, some butter, sugar, and nutmeg, put them together, and being well brewed, drink it when you go to bed.

Take three pints of beer or ale, put five yolks of eggs to it, strain them together, and set it in a pewter pot to the fire, put to it half a pound of sugar, a penniworth of beaten nutmeg, as much beaten cloves, half an ounce of beaten ginger, and bread it.

This is just enough for two people using one large bottle of British ale – scale up the ingredients to make more for more people. Both recipes are given below and are translated for the modern kitchen using the authentic recipes by Robert May: ‘Buttered Beer’ and ‘Buttered Beer Otherways’.

To make it non-alcoholic for any younger adults heat the ale for 20 minutes at 140C, (use a cook’s or jam thermometer) this will burn off almost all of the alcohol.

Into a heavy based saucepan pour in a bottle of real ale and slowly simmer it on a gentle heat. Once at the simmering stage, and cleared of froth, add the liquorish root (break it up) and the aniseed. Bring up to a low boil for 5 minutes. After 5 minutes turn off the heat and leave steep for ten minutes.

After ten minutes pour the beer through a fine sieve into a jug, clean the saucepan, then return the clear, strained beer to the clean saucepan and gently reheat to a simmer. In a bowl beat the egg yolk and butter (and sugar if adding) to a creamy paste.

Turn down very low the heat under the saucepan, then whisk the butter and egg mixture into the beer, make sure you whisk thoroughly so that the butter dissolves and the yolk of the egg does not scramble. The Butter Beer should thicken slightly and go a milky tea colour – whisk to a froth for a minute. Once whisked vigorously serve in heat proof mugs, glasses or tankards – drink when cooled slightly.

Into a heavy based saucepan pour in a bottle of real ale and slowly simmer it on a gentle heat.

In a bowl beat the egg, butter, sugar and nutmeg to a creamy paste.

Note: if you are going to add in some egg shell into the pot please ensure the egg shells have been scrubbed clean and rinsed thoroughly on the outside before cracking open the egg. Strain the beer through a sieve before drinking. I have made this recipe with and without egg shells and they add nothing to the taste or texture once sieved out, so I no longer add the shells, saving the need to sieve the butterbeer.

Turn down very low the heat under the saucepan, then whisk the butter and egg mixture into the beer, make sure you whisk thoroughly so that the butter and sugar dissolves and the egg does not scramble. The Butter Beer should thicken slightly and go a milky tea colour – whisk to a froth. Once whisked vigorously serve in heat proof mugs, glasses or tankards – drink when cooled slightly.

If outside of the UK and getting the following ales proves difficult, then get a good local ‘real’ ale brewed in the traditional way from your country, (often referred to as ‘cask conditioned ale or beer’). Do not use a modern beer such as ‘lager’, even those brewed in the UK. While lager and ale (British Beer) are two different types of beverages, in Britain it should be noted that traditional beer and ale are interchangeable names for roughly the same thing (although it is slightly more complicated than that). 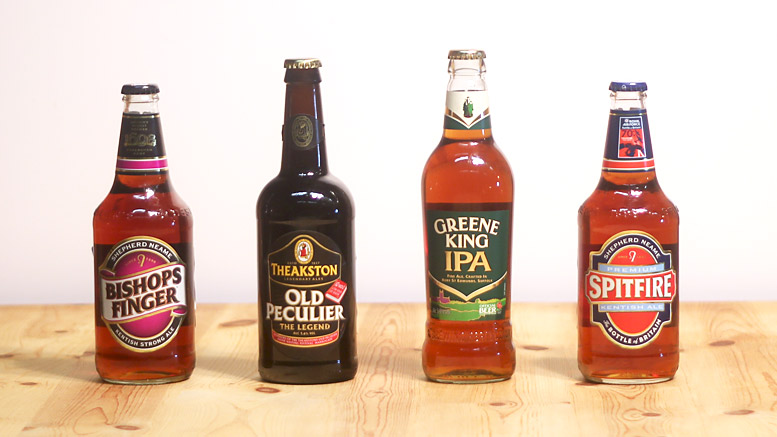 1) ‘Bishops Finger’ from Shepherd Neame Brewery – the brewery was founded in 1698 so it is the perfect ale for our Buttered Beer recipe from 1664, it is also the oldest known British brewery. 2) ‘London Pride’ from Fuller’s Brewery – a lighter ale, this is good if making the Butterbeer non-alcoholic by simmering all the alcohol off. 3) ‘Old Peculiar’ from Theakston’s Brewery – an excellent all rounder for adults having an alcoholic Butter beer, with only gentle simmering. There are many other good makes, but these three are some of the best. If bottled beer is not widely available then cans of ‘Old Speckled Hen’ from Greene King brewery are also recommended.