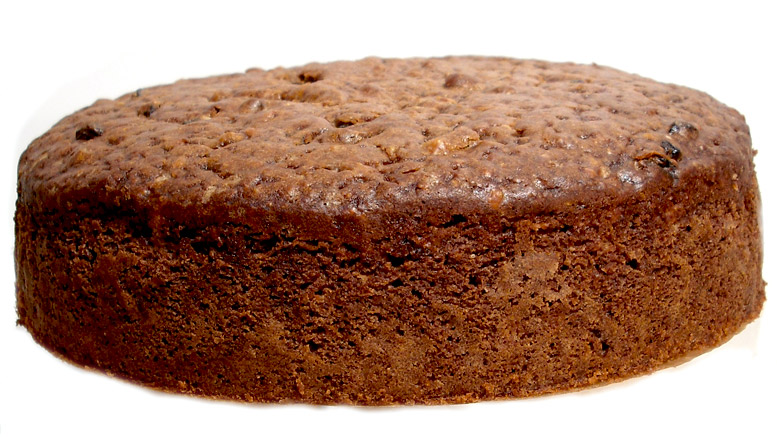 A Christmas Cake From A Victorian 1861 Recipe

This is a highly recommended Christmas Cake recipe which comes from Mrs. Beeton, one of the most famous cook-book writers of the Victorian period. Unlike the later, much heavier fruit cakes, those laced with Brandy and which are now considered to be ‘traditional’, this recipe is far lighter and contains no alcohol. It is also easy enough to make up just a few days before Christmas, or even on Christmas-Eve, avoiding the long-drawn-out process of making a Christmas Cake weeks in advance, and ‘feeding’ it with Brandy and then icing it.

This is a very surprising Christmas Cake in many regards, it is very much like a very nice, moist treacle and ginger cake with raisins, with positive reviews by all those who tasted it, (many saying that they would be making it themselves for Christmas as a second cake). I would have to say that this cake deserves its place at Christmas, not through nostalgia, but on merit, by just how good it tastes.

As a Christmas Cake it would appeal to those who often decline a slice of the ‘traditional’ fruit cake offered at this time of the year because of how ‘heavy’ it is. And while the addition of butter and cream makes this a rich cake, the black treacle adds a subtle molasses note, a slightly bitter note which works very well with the main taste of ginger; and although it seems like a large amount of ground ginger is used in this Victorian recipe, (ginger was seen very much as an essential Christmas flavour and smell in this period) it does not overwhelm the cake; and the raisins act as a counterpoint, keeping this cake moist and sugary. It tasted excellent straight from the oven, and even better three days later.

From, ‘A Book Of Household Management’, By Mrs. Beeton, Published 1861.

Mode.—Make the butter sufficiently warm to melt it, but do not allow it to boil; put the flour into a basin; add to it the sugar, ginger, and raisins, which should be stoned and cut into small pieces. When these dry ingredients are thoroughly mixed, stir in the butter, cream, treacle, and well-whisked eggs, and beat the mixture for a few minutes. Dissolve the soda in the vinegar, add it to the dough, and be particular that these latter ingredients are well incorporated with the others; put the cake into a buttered mould or tin, place it in a moderate oven immediately, and bake it from 1–3/4 to 2–1/4 hours.

I would recommend making this Christmas Cake up one or two days in advance, although it is not essential – wrap it in grease-proof paper and then foil and store it in an air tight tin – the ginger will mellow to make an even better tasting cake on Christmas Day.

Melt the butter. Roughly chop up the raisins. In a bowl beat the eggs with a whisk until frothy.

Into a large mixing bowl sift in the flour, add in the sugar, ginger and raisins. Stir and mix well. Stir in the melted butter, then the cream, then the black treacle, then the beaten eggs. Mix everything thoroughly so that nothing is clumping, add in a little extra cream or milk if the mixture is a little dry.

In a small bowl or cup dissolve the bicarbonate of soda into the white wine vinegar, it will froth up vigorously. Add this to the cake mixture and mix it in thoroughly.

Pour the cake mixture into the greased cake tin and then bake in the oven for 2 hours on a low temperature (160C), checking after 1 and 1/2 hours to see if it is done by pushing a metal skewer into the centre of the cake and seeing if it comes out hot and clean and the center is still soft – if it needs the extra 30 minutes turn the cake around in the oven and bake for the full 2 hours.

Once baked pull the cake from the oven, leave to cool in the tin for twenty minutes. Then remove the cake from the tin to completely cool on a cake rack. Serve in slices if made to serve on the same day, or wrap it in greaseproof-paper, then foil, to mature in an air tight tin for a couple of days. This cake benefits from a couple of days to mature.