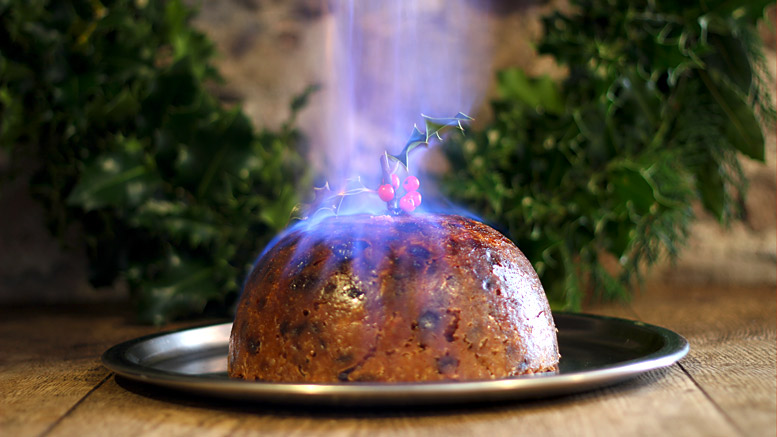 We can give you no more assurances that this is the actual recipe made for the Royal Family each Christmas other than to point you to the original source of the recipe: ‘Food In England’ by Dorothy Hartley, published in 1954. There are some things to note before claiming this is (or is not) the secret recipe of the Royal Family’s Christmas Pudding: firstly Dorothy Hartley’s book is highly recommended as a reference on British Food History, she impeccably sources and describes all that she writes about, well, except this recipe, she says nothing about it, apart from writing it out and giving it the full title of, ‘The English Royal Family’s Christmas Pudding’. So. Make of that what you will.

Although The Prince of Wales produces his own organic Christmas puddings, and among others Fortnum & Mason’s supply the Queen with Christmas puddings to give as gifts to her staff, the Royal Family eat Christmas Puddings cooked by royal chefs, in the royal kitchens, to a secret Victorian recipe. Perhaps this is it, perhaps it is not, whatever the facts of the matter, it is a very good recipe made with the traditional 13 ingredients (see the end of this post) ... It can be stored for several weeks and/or months and it will improve with ageing and maturing.

Here we are using modern weights and measurements in the recipe, all that has been adapted from the original recipe (see the end of the post) is to make the pudding smaller, with an expanded method to help understand how to make this classic Christmas Pudding in the modern kitchen.

Notes on making: The pudding is a slightly lighter colour than some other Christmas puddings, (it will darken on maturing and a second steam) because of the amount of suet used. Do try to source the citron fruit (which is similar to an orange or lemon) to use its peel, chopped small, in the recipe – failing this use lemons. This recipe rewards being made a few weeks or even months in advance, to give it time to age and mature – this recipe will make one large pudding in a 2 litre pudding basin, or two large puddings in 1 litre pudding basins.

The day before: Use a peeler to peel the citrons (or lemons) without the white pith and chop the peel up small – (you can use the juice in a mulled wine). In a very large mixing bowl add the eggs, use a whisk to froth them up, and then whisk in the milk. Add all the other ingredients (except the brandy) and stir them in thoroughly. Cover the bowl and leave for 12 hours overnight somewhere cool. Note on suet – you can use a beef suet or a vegetarian substitute if preferred.

Stir in the brandy and give another good mix. Make sure all the ingredients are thoroughly mixed in and there are no clumps – if this is being made on Stir-Up-Sunday get all the family to stir the pudding for luck. If the mixture is a little wet add in some extra plain flour, if a little dry add in some milk. The mixture should be of a soft ‘dropping’ consistency, i.e. the mixture is not too sloppy but will drop off the spoon when tilted.

Spoon the mixture into the greased pudding basin, and pack it down a little, level the surface with the back of the spoon – the level of the pudding should be about 3cm (1.5 inches) below the top (or less) of the basin. I like to use an oven-proof clear glass pudding basin so that I can see what is going on during the steaming time and later on how it is maturing. Cut a round, large sheet of baking parchment (or greaseproof paper) and one of foil slightly bigger so they will come down at least 10 cm (4 inches) over the sides of the basin.

Lay the baking parchment on top of the foil and fold a large pleat down the centre of both (to allow for any pudding expansion). Lay the sheets over the top of the pudding basin (foil side up) and secure around the sides with string – wrap the string around the pudding basin several times tightly and tie the string off to make sure the foil top is secured down firmly and the pudding is sealed. Trim off any excess foil and paper if it is too long. You can even make a string handle by looping it over the top and tying it off under the string going around the basin.

Keep the water at a medium simmer and a gentle bubble, cover with a tight fitting lid and steam for 7 or 8 hours, topping up with boiling water from time to time. It is important to keep checking the level of the water so that it does not run dry.

After the allotted time spent steaming remove the pudding basin from the steamer or saucepan and allow to cool. When cool take off and replace the foil and greaseproof paper top with some fresh sheets and re-secure and seal – before sealing drizzle over a little extra brandy (30ml). Store in a cool dark place until Christmas Day.

To serve: If setting the pudding alight it is often best to use a metal tray or plate with a lip to sit the pudding on and contain the lighted brandy as it is poured over … add a small sprig of holly with berries into the top of the pudding and take the pudding to the table, (it is better to light the pudding at the table rather than carrying it in).

In a small saucepan warm some brandy and vodka, (the vodka ads a higher alcohol volume to increase the time of burning). Gently heat it through so that it is steaming. Using a lighted taper light the rising vapours in the saucepan, dim the lights and pour the lighted brandy and vodka over and around the pudding – it will only remain alight for a short time, then cut into the pudding.

Use a knife to cut the pudding into slices and turn the slices into bowls – serve with a Single Pouring Cream, Brandy or Rum Butter and/or Vanilla Custard

Tasting Notes: Rather than start of with the taste let me start off with the smell, it is perhaps the best smelling Christmas Pudding of them all, there is a lovely citrus smell which wafts off the pudding, almost like a scented candle. The texture is firm and dense, like most puddings of this sort, but it is not one of the ‘heaviest’ Christmas Puddings; in other words it can be enjoyed after a big main meal with all the trimmings. This is not one of those painfully dark and mud-like Christmas Puddings.

In terms of flavours the citrus peel dominates as an after-taste, and due to the large amount of suet, (to flour and breadcrumb ratio) there is a greasiness left on the lips. However, that said, it is a very enjoyable pudding, particularly so with a pouring of single cream over it. If I was to change anything from the original recipe I would slightly decrease the amount of suet and citron peel and increase the amount of brandy.

13 Ingredients: the observant among you will notice that this recipe has the classic 13 ingredients – the 13 ingredients are said to represent Jesus and His Disciples, and this number has become very much associated with the Christmas Pudding. On Stir-Up-Sunday (each year in late November) in Christian households, someone recites while stirring the pudding mix east to west, (in honour of the journey of the Magi): “Stir up, we beseech thee, O Lord, the wills of thy faithful people; that they, plenteously bringing forth the fruit of good works, may by thee be plenteously rewarded; through Jesus Christ our Lord. Amen.”

From ‘Food In England’ by Dorothy Hartley, published 1954

Note: This original recipe will make a very, very big pudding – enough for 28 people – you will need a 5 litre pudding basin, and a saucepan and lid big enough to cook it in, this is getting on for banquet or commercial sized catering. The translated recipe below uses all the correct proportions of the original recipe but makes a more manageable 2 litre sized Christmas Pudding.

Recipe Method: Prepare all ingredients, well whip the eggs, add to milk, and thoroughly mix. Let stand for 12 hours in a cool place, add brandy and put into well-greased basins and boil 8 hours or longer. Sufficient for twenty to twenty-eight people.