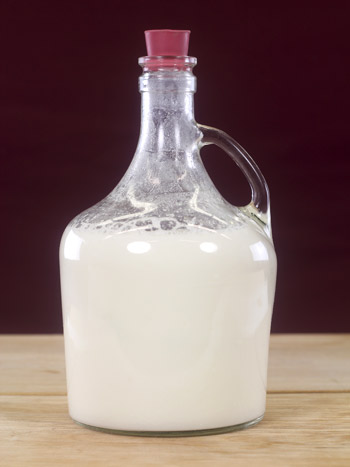 Clabber, or bainne clábair, (or bonny clabber) is a soured and thickened milk used by the Scottish and Northern Irish in baking, cooking and for drinking. It’s name comes from the Scots Gaelic, bainne-milk , and clábair-sour milk. It is used in making breads, scones, and for drinking, or flavouring to make clabber ‘yoghurt’s’. Use it as buttermilk in traditional Scottish and Irish recipes.

What is Clabber? Clabber is when unpasteurized buttermilk from making butter, or fresh milk, is left at room temperature and turns sour and thickens – due to a naturally occuring friendly bacteria (lactic-acid bacteria). Over time the milk thickens or curdles into a yogurt-like substance with a strong, sour flavour. Clabber needs the correct (good) bacteria in the milk to sour, rather than go off.

In modern times shop-bought milk has become pasteurised, it has undergone a process whereby all the bacteria (good and bad) has been killed off before being sold – so we need to add back in the good lactic acid producing bacteria. To do this we need to purchase a cultured buttermilk, (which is basically an early stage clabber) from the shops. Note: a cultured buttermilk is not a traditional buttermilk or an acidified buttermilk.

Making the clabber starter: In a sterilized (and cleaned-rinsed) glass jar which can hold 600ml (1 pint) or wide-necked bottle which you can seal, add 240ml of fresh milk, with 240ml of cultured buttermilk, seal the jar and shake. Allow the milk to sit at room temperature, and leave it until it has clabbered (initially this usually takes several days) – it should have soured and visibly thickened to resemble natural yoghurt.

Taste a small amount of this cultured clabber to confirm that it is now tart (acidic) and thickened, and importantly it has no off flavours – it should not taste bitter for example. This is now an established clabber starter or inoculum.

Making the clabber: To make just over a litre of clabber – add about half (200ml) of  the clabber starter to a sterilized (and cleaned-rinsed) 1.2 litre jar you can seal. Fill with 1 litre of fresh whole milk – seal and shake to mix. Allow this to sit at room temperature until clabbered (two or three days). Once clabbered refrigerate and use when needed.

Note: a mould may develop on the inner walls of a clabber jar if left for several weeks unused. This mould comes from the same group of fungi which naturally grows on cheese and it is not harmful. Remove the clabber, and clean the jar, and the clabber can still be used for baking.