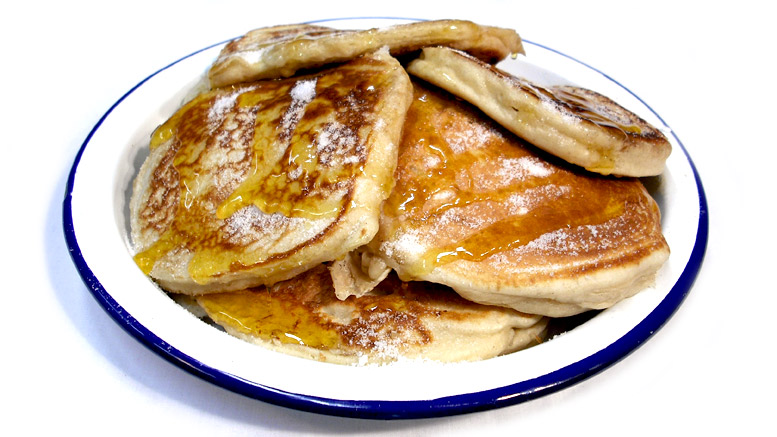 This is a recipe to make traditional Welsh ‘Crempog’ (or ‘Ffroes’). These are similar to small (yet thick) pancakes or ‘pikelets’ and made with buttermilk they are often served with golden syrup (corn syrup) and sugar to sweeten. Crempog are served in Wales particularly on Birthdays, Shrove Tuesday, St. David’s Day (1st of March) and on Bonfire Night (5th of November).

This recipe (using baking powder or bicarbonate of soda) dates from the late 1800s and early 1900s while ones made with fresh yeast instead, (Crempog Furum) are considerably older (see the end of the post for more original recipes); Crempogau were an essential part of the welcome given to visitors when invited for afternoon tea. Indeed, the English word for crumpet might have developed from the Welsh word crempog – while in reverse the other Welsh name for Crempog, ‘Ffroes’ may have come from the Old English name for a deep fried batter/pancake called ‘froise’, a name found in many old cook-books.

In a bowl mix the bicarbonate of soda with the buttermilk. Add in the sifted flour and the beaten egg and whisk into a thick batter – it should be thicker than a normal pancake batter, add more flour if a little wet. Leave the batter to rest in the fridge for an hour or two.

Remove from the fridge, whisk thoroughly then heat a frying pan. Add in a knob of butter to the frying pan, and then drop in a large tablespoon of the Crempog mixture at a time and fry each side until golden brown. They will form small, round, thickish discs. 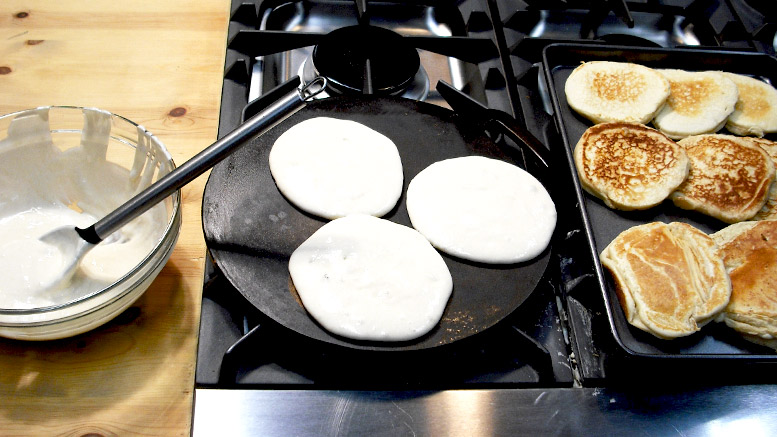 Pile each crempog on a metal dish or oven tray and place large dabs of butter over them – keep them warm in the oven until all the crempog’s are fried off and everyone can be served. Place several crempog’s on a warm plate, drizzle over some golden syrup and a sprinkle of sugar before serving.

Crempogau were traditionally cooked on a ‘bakestone’ a thick, cast-iron disc of metal, sometimes known as a ‘gridle’ or a ‘planc’ in Wales. S. Minwel Tibbott, in the book, ‘Welsh Fare’, (published in 1976) says “It was a general tradition to prepare pancakes for afternoon tea when celebrating the birthday of any member of the family … pancakes were baked throughout the whole of Wales but their names in Welsh differed widely from county to county” …

The older Crempogau, in the 1700s and early 1800s, made with yeast and/or oats and barley meal, would have been served with a little black treacle and sugar, but by the 1880s a new refined process made possible Golden Syrup, (corn syrup) which became popular, as did the newly commercial ‘bicarbonate of soda’, to make the pancakes rise, which replaced the yeast – see the ‘Crempog Furum’ recipe below (from the book ‘Welsh Fare’) for the oldest type of Crempog.

Mix the yeast with a little sugar and warm water and leave to prove in a warm place. Heat the milk or buttermilk and dissolve the butter in it. Sift the flour and salt into a bowl, add the sugar, make a well in the centre and pour the well-beaten eggs into it. Now gradually add the milk and beat the mixture well to make a soft, creamy batter. Lastly add the yeast mixture and leave the batter to rise in a warm place. Bake the pancakes on a heated bakestone or frying pan in the usual way. Then split each pancake in half and spread with butter and with treacle. Serve warm.

The basic ingredient used in making these sour-oats pancakes was oatmeal, or barley meal, mixed with a little plain white flour. Using a little yeast, the batter was prepared by following the same method above for Crempog Furum, but was baked in the form of large thin pancakes. They were served with treacle or butter.

This Crempog recipe comes from Dorothy Hartley “Food in England” 1954. “This recipe was given to me by a Welshman from Carnarvon, out of his mother’s old manuscript book written in Welsh [1800s].”

1/2lb flour, a piece of butter the size of a walnut rubbed in, buttermilk to mix to a smooth batter. Beat 1 egg and add it, and let it stand for an hour. Before frying, add 1/2 teaspoonful of bicarbonate of soda. If the buttermilk is not sufficiently acid, a few drops of vinegar should be added to it. Butter the pan and fry to a clear light brown.

This Crempog recipe comes from a book of regional dishes published in 1962, “Country Dishes”, a book of older recipes remembered as family favourites and regional specialities.

Mix the soda in with the cream or buttermilk. Beat together to a thick batter, heat the frying pan, rub with lard, drop in mixture a tablespoonful at a time, fry until golden brown, turn and fry the other side. Pile on a dish with large dabs of butter between each cake, put into the oven until all are cooked. Serve very hot with sugar or syrup.

Posted in All Recipes.
Share
←  NewerThe Turkey At Christmas
Older  →Boxty | On The Griddle