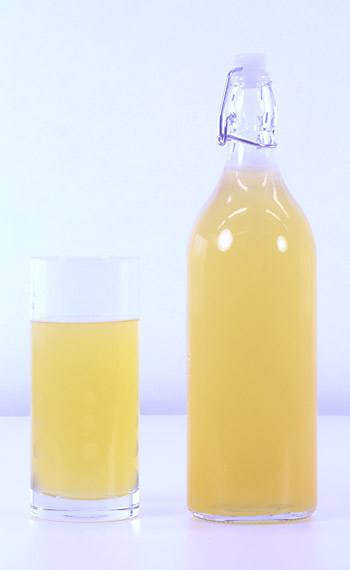 This is an authentic Victorian recipe for Diod Sinsir, or Welsh Ginger Beer, it is from the self-penned recipe book of Miss M. E. Curtis in 1852, from Wales. Ginger beer was a favourite amongst the Victorian Welsh miners and labourers who grew thirsty during the day at their work, and considerable quantities of this refreshing drink were made and consumed. Although it is easy to make it became a near daily chore for the Welsh housewife, similar to the chore of the Anglo-Saxon women, in the brewing of beer and ale in the first millennium.

Note: This recipe will make around 2 litres of ginger beer, (with ratios taken from the original recipe) so if you would like to make more, for a feast or celebration, (such as Halloween or Bonfire Night etc.) just increase the ingredients in the same ratio. It is best to store the ginger beer in sterilized glass bottles which can either be corked or capped, or if you own a larger home-brew beer barrel this can be used.

Some pressure will develop in the bottles as the yeast makes carbon-dioxide in the fermentation process, however, very little alcohol will be produced, (unless extra sugar is added in to the second fermentation stage – i.e. a tbsp of sugar added to the bottles before capping).

Tip: Sterilize all equipment; yeast production will be hampered if the utensils and equipment you use are not sterile … a traditional sterilizing ‘tea’ in the Victorian period was usually made with hot water and fresh rosemary stems. This is actually quite effective, and means you do not need to use modern cleansing chemicals or tablets.

Note: There will be pressure building up in the bottles you chose to store the Ginger Beer in (when letting it clear) from the carbon dioxide gas being created by the yeast in the fermentation process. Choosing the wrong type of bottles, or not corking them correctly, can result in the bottles breaking or the corks popping and ginger beer being sprayed everywhere. Store the bottles somewhere safe, cool and easy to clean like a container in a garage if being stored for a longer period of time.

Peel the lemons, cut them in halves, squease [sic] them on the sugar – bruise the ginger and let them all be in a pan. Then pour the boiling water on them. When cold enough add a small tea-cup full of yeast. Let it stand 24 hours, then bottle it, in three days it will be fit to drink

In a large clean and sterile plastic container or large non-metallic mixing bowl pour in the sugar. Zest the lemon on top of the sugar, then cut it in half, squeeze the juice out over the sugar. Bruise the stem ginger with the back of a knife, then cut it up and add to the sugar in the mixing bowl.

Heat the 1.5 litres of water separately in a large saucepan and then add the boiling water to the sugar, lemon and ginger – stir for a few minutes. The sugar should dissolve into the boiling water. Allow to cool to a warm room temperature. 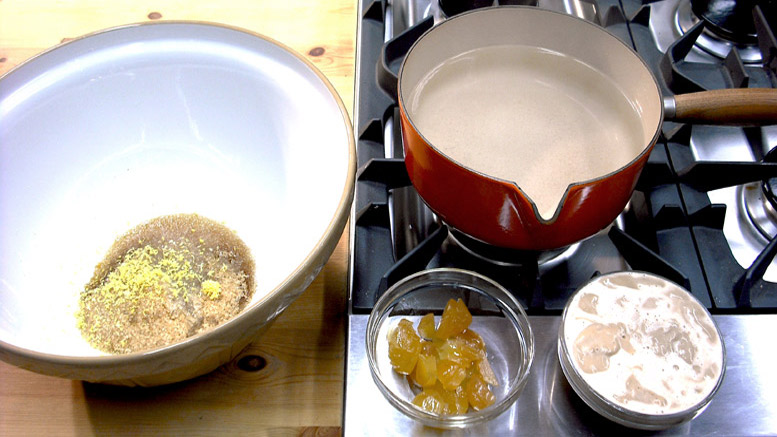 Into a jug or bowl with 300ml of ‘above room temperature water’ (just boiled and allowed to cool) add 2 tsp of sugar and stir, then add in the dried or live yeast. Allow the yeast to activate and become frothy, after about ten minutes pour the yeast and water into the mixing bowl or plastic container with the ginger beer in, and stir in thoroughly.

Cover the mixing bowl or plastic container with a clean cloth and leave somewhere warm for 24 hours. Place it somewhere where you can reach it without having to move it again too much. Over the twenty four hours any larger sediment particles will have sunk to the bottom of the container and you don’t want to disturb this too much.

After 24 hours carefully skim most of the frothy yeast off the surface (this yeast can be used to make bread, as they once traditionally did). Gently tip the ginger beer through a fine mesh sieve, or muslin cloth folded over several times, into another clean, similar sized bowl or plastic container. You do not want to excite the beer too much and lose the carbon-dioxide bubbles already created by the yeast production, we just want to clear it of any yeast particles. Also be careful not to tip out any of the larger sediment at the bottom of the container. 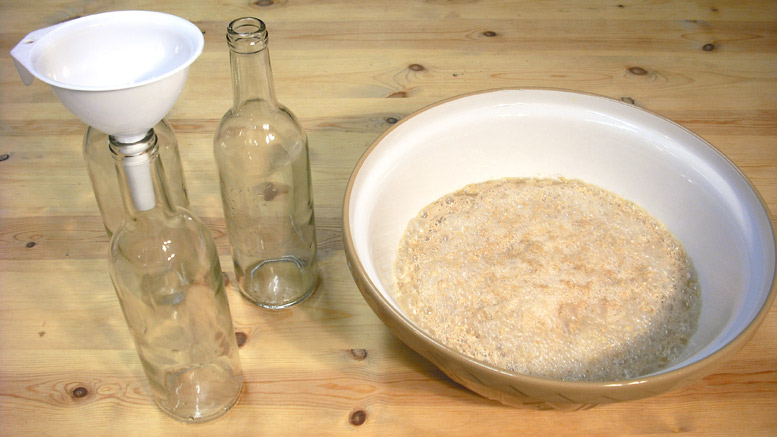 Finally decant the cleared and sieved ginger beer into sterilised glass bottles, using a funnel and a ladle. Cork or cap the bottles fully and store somewhere cool and undisturbed for three or four days. Some pressure will build up in the bottles, as Carbon Dioxide is generated by any remaining yeast, so make sure you use thick glass bottles and properly cork or stop them.

Diod Sinsir In Another Manner

In Theodora Fitzgibbon’s 1971 book “A Taste Of Wales” she gives this interesting version of a Welsh Ginger Beer. The weights and measurements have been translated for the modern kitchen. This seems a very rural and very old welsh recipe for a flavoured ginger beer.

Into a 6 litre saucepan add a large handful of dandelion leaves, blackcurrant leaves and the nettles. Place on top the two sticks of rhubarb, the pounded stem ginger and cover the lot with 1 litre of water. Bring this up to the boil and boil for 15 minutes. Allow to cool for two hours, then strain the liquid out through a large sieve with a narrow or fine mesh, discard the solids and keep the liquid.

Clean out the saucepan and add back into it the strained ginger water. Put back onto a gentle heat and add the sugar, stir until well dissolved. Add in the remaining 4 litres of water, stir and take off the heat to cool to room temperature. Pour this into a large, clean sterilised plastic container or plastic bucket.

Into 200ml of just boiled and cooling water add in 2 tbsp of sugar and the yeast, stir, and allow the yeast to ferment and froth for ten minutes. After ten minutes add the yeast to the ginger water in the plastic container and stir in. Cover with a clean cloth and leave somewhere warm and undisturbed overnight, at least 12 to 24 hours.

After 24 hours carefully (not to disturb the container) skim most of the yeast off the surface (the yeast can be used to make bread) decant the ginger beer into sterilised bottles, leaving behind any larger impurities which sank to the bottom of the plastic container. Cork or cap the bottles and store somewhere dark but at room temperature and undisturbed for three or four days. After three days (optional) put the bottles in the fridge to chill, then serve.