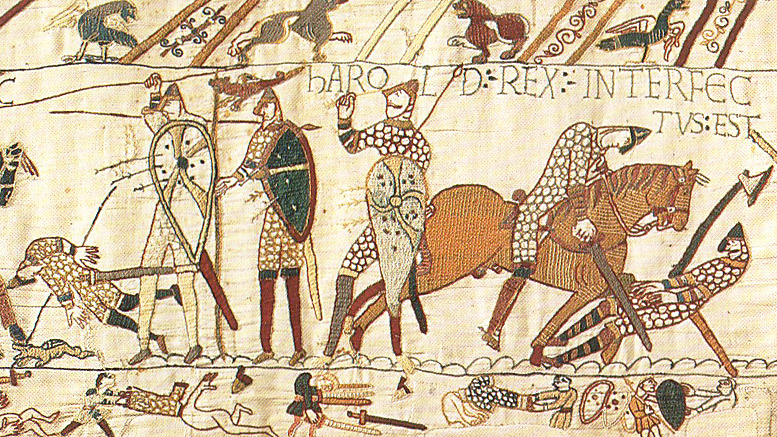 Two other records we can study are also considered reliable, but both come right at the end of the Anglo-Saxon ruling dynasty in England. These are the Bayeux Tapestry and the ‘Doomsday Book’. It might sound strange staring at a tapestry that for the most part is like a child’s drawing, but by understanding what we have read so far we can start to piece together what was being eaten. In the image of the Bayeux Tapestry (an image of which is used to illustrate this article – a tapestry made shortly after the Norman Invasion of England in 1066 A.D.) you can clearly see cooks with the Anglo-Saxon army depicted preparing and serving a banquet.

A raiding party would return from the countryside with a cow, sheep or pig (stolen from a local farm) and the resultant feast was cooked in the open air, roasted on spits, while a cauldron bubbled over a fire – from this we should be able to correctly infer that the meal would have been of roast meats, a briw (stew or broth , probably of peas, beans and root vegetables) and fresh baked bread. The images also tell us that the food was then passed to the servants, who ate the coarser fare on a table assembled from shields. They in turn served their masters who sat at a table and dined in some style.

By contrast to this scene we know from surviving monastic writings that monks were supposed to eat a frugal diet, and their rules and customs usually outlawed the eating of meat except by the sick. In theory their standard fare was two simple dishes a day – cereal, beans, vegetables, eggs, cheese and bread – although in practice many Benedictine communities ate very well. From looking at the second source, the Doomsday Book, (an account of all the lands conquered by William in the invasion) it showed meat, fish, butter, lard, dripping, milk and honey all appearing on monastic tables at this time, although do note: the reformed orders which sprang up from the late 11th century eschewed excessive eating.

Most of the peasants in the villages of Domesday England had no such choice – from this record we know theirs was a subsistence diet of bread, with beans, peas and root vegetables cooked as a a briw, stew or broth, supplemented occasionally by cheese, fish and fowls and more rare still, by red meat. It must be noted that of the skeletal remains that have been examined from this period, over a quarter show they suffered some kind of malnutrition of one sort or another (particularly in childhood). However, it is also important to note that neither scurvy nor rickets are commonly found in their remains, indicating fruit, nut and dairy products (gathered from the surrounding forest areas) were part of the wider diet.

Some Anglo-Saxon practices relating to farming food do survive. In AElfric’s Colloquy the shepherd states, ” … at the crack of dawn I drive my sheep to pasture, and I stand over them in heat and cold with my dogs, so that wolves don’t devour them, and I take them back to the folds, and milk them twice a day, and move their folds, and on top of that I make cheese and butter … ” Milk, butter and cheese was common from sheep, goats and cows, although this would not have been a year round occurrence like it is today, older breeds of these farm animals only give milk in the spring and summer seasons, hence fresh cheese and butter would also have been seasonal. Eggs are also seasonal, (hens laying all year round are a modern breed) and were either made into a type of omelette or eaten hard-boiled or mixed in wine and used as a thickening agent.

For all of society, an Anglo-Saxon Ale was the basic beverage. Although it was brewed at a weak strength it was consumed in vast quantities: the average monk had an allowance of at least three gallons a day. Mead, a drink based on honey, was consumed on special occasions. There are many entries in Domesday for bees kept in Essex and Norfolk, and honey of good quality is recorded in both of these counties and many others. Honey was an important ingredient in Anglo-Saxon cooking, used to sweeten broths, glaze roast meats etc., and to make drinks like mead.

Also the Domesday Book records many vineyards, but an attempt to establish a significant English wine industry by the Norman invaders was to prove short lived, with a cooling of the climate and an increased rainfall making a wine harvest difficult. But wine did start to establish itself once again in Britain (like it had in Roman times) with an ever increasing import of it from the continent (this trend continuing right through into the medieval age) although this is not to say that wine was not already commonly being used in Anglo-Saxon cooking for the noblemen. 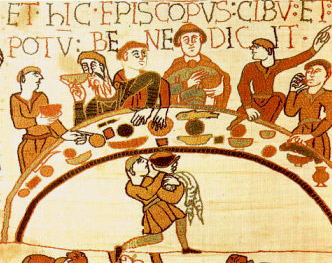 Feasting Shown In The Beyeux Tapestry

What we should understand is that there is a distinct difference between the Anglo-Saxon period, and the way of eating and serving a meal, and where the country was headed under the new Norman rule. The incoming Normans were heavily influenced by the continent, and the growing middle classes and ruling elite of Medieval Britain could afford to import more food, exotic ingredients and drink from the expanding trade routes. And unlike in the Medieval period there were no food courses and elaborate entertainments in the Anglo-Saxon period; all the food was served at once, on platters made of wood; while it was expected that the guests would have brought their own knife, spoon, wooden bowl and drinking vessel.

Hunting, particularly in the winter period, of forest game was considered an appropriate past-time of the elite, who also employed hunters to catch something for their table and feasts. At these occasions roast meats of animals and birds would be placed in front of the guests, with the best cuts given to those honoured hunters or favoured guests – boiled food, including seasoned broths of barley, oats and rye grains, would be served from the cooking pot into the wooden bowls each guest had brought, and anything that was not too juicy or moist, including bread, fruit and cheese would have been eaten out of hand, and taken from wooden bowls and platters put out in front of them.

Beans, peas, onions, garlic and leeks are mentioned frequently in passing reference in Anglo-Saxon texts and became descriptive place-names of places where they were grown, and as locally grown agricultural crops they would have played a large part in their diet, along with the cereals and grains already mentioned. Fresh fish would only be served if caught locally, (if the hall or village was by the coast for example) otherwise, inland, it would have been salt-preserved cod (similar to Salt Cod). Ale, wine and mead would all be served at the meal of the richer households, with just ale at the poorer. Trade was certainly thriving in England, yet we should note that most of the available food at this time was mainly seasonal, and was picked, hunted, grown and reared locally to where it was cooked and eaten.