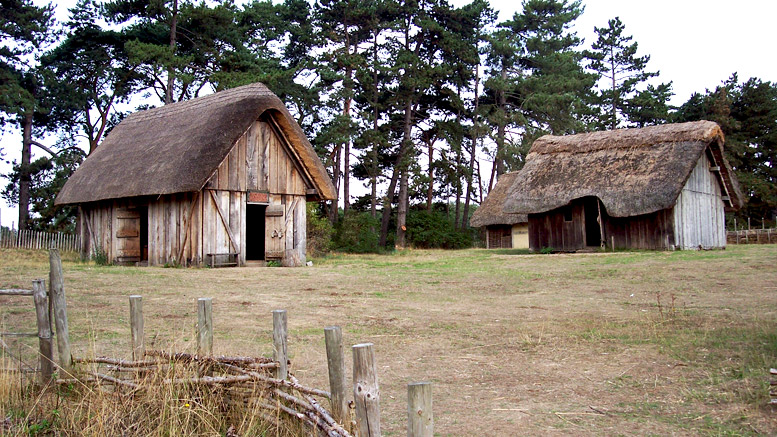 The earliest breads baked in Britain were flat bread, unleavened. However, from surviving poems, we know that the leaven, wheaten-breads and mixed grain breads (very similar to the Medieval Manchet Bread or plainer Maslin Bread) had become prized, if not yet altogether common in the Anglo-Saxon period. Rents to the lord of the land were often paid in leaven bread – in one source a recorded food-rent suggests that bread given in rent was distinguished as being either ‘sour’ or ‘clean’. This is certainly a reference to breads risen either with a yeast from a sourdough or from a brewer’s yeast.

The open field system used by the Anglo-Saxons meant harvests were often thin and poor, frequently failing because of blight, disease and the weather. In order to maximise the availability of food grown (and surviving to maturity) the Anglo-Saxons planted a varied crop each season so that blight etc. did not decimate a whole single crop and leave them with nothing. They grew various hardy cereals, like barley and rye etc. and other crops such as beans, peas, vetches and ‘weeds’ (for their animals to eat).

Note: The word ‘Korn’ (corn) in Anglo-Saxon refers to all types of cereal grains, today the word corn (or maize) refers to a single type of crop brought from the Americas 800 years after the middle of the Anglo-Saxon period, and therefore this ‘modern’ crop would not have been known to Anglo-Saxon farmers or anyone in England until the 16th Century.

If ‘corn’ failed in the fields (wheat frequently failed in the wetter years) then the Anglo-Saxon farmers (as a diversification programme to ensure the continuation of food supplies) grew other food stuffs to feed them through the year, particularly grains, grasses and beans more tolerant and hardy to the local climate, the soil, and the relief of the land. This also meant that in their bread they added as a matter of course various ground mixed cereals (not just wheat) and dried ground beans and peas as flour to their bread. This made a course ‘black bread’ leavened with beer barm, (and which was also made as a sourdough) – mixed grain flours never rise as well as wheat based flours, having less yeast activity, making a flatter, chewier, heavier bread.

Growing Cereals Such As Wheat & Barley

However, unlike in the medieval period, where bread was a universal foodstuff, the personal energy and time expended in grinding grains of wheat and barely with dried beans and peas, into flour to make bread, and the cost of having it done by the emerging commercial water mills appearing on the nobleman’s estate, probably meant that bread eaten as the predominant food stuff served in all meals was the preserve of the rich and the more well off in Anglo-Saxon society. And yet, although bread was probably not a daily food source for the poor, cereal grains still made up a bulk of their diet, being used as bulking and thickening agents in broths, as an altogether easier way of cooking them; after grinding and pounding them to speed up their cooking.

In good years, when the cereal grain became fat and the harvest was good, the crop was reaped and used several times. First the cereal grain or ‘ears’ were harvested to grind into flour, then the long stalks of straw were cut to make ropes and baskets, thatch for houses and the roofs of farm buildings, and ‘skeps’ for keeping bees. The stubble closest to the ground after both cuttings was kept uncut and used for cattle fodder and then the pigs and sheep were left to graze over the ground to get the last remaining forage.

Keeping the ears of cereal grains and using them when needed was an art-form in itself. The cereal grains were kept in the driest place in the home, and the grain was left still in the husk and in the ear to give further protection, (to stop it from sprouting in any damp). When needed a handful was taken up at a time, held by the short stalks, and was quickly cast into the fire, setting flame to the ears. Then with a stick in the other hand the ears, which are now aflame, are beaten just as the husks become burnt. This process, known as ‘parching’ dries the grain in the husk and frees it ready for grinding into flour. It takes some skill to do this but with experience it can be done in a communal setting while chatting.

Invasion And Assimilation Of Ideas And Recipes

Did the incoming Anglo-Saxons take any culinary ideas or techniques from the Celtic and Romano-Celtic peoples they slowly replaced in Southern England? They obviously had to adapt to the established seasonal local produce of the area they inhabited, and there is very good evidence to suggest that instead of a catastrophic flood of migrants into Southern England after the Romans left in around 410 A.D. occupation evolved more slowly than that.

There is evidence to suggest there was a continual presence of families and farmers at already established communities, indicating that saturation by the Anglo-Saxons was less dramatic and slower than at once first thought. As the historian Don Mackreth says, “There is no incontrovertible evidence that there had been a distinct break in occupation [at Orton Hall Farm] too many of the proven Anglo-Saxon features only make sense if Roman structures were still standing.” This is excellent archaeological evidence of a Romano-British farm adapting over time to Anglo-Saxon settlers, settlers who would have absorbed local ideas, customs, tools and recipes.

At this important archaeological dig site [Orton Hall Farm] shards of a mortarium were also found, and this is very interesting for us, as this was an Anglo-Saxon copy of a Roman designed mortar for grinding spices, which we know the Celtic Briton’s themselves absorbed into their way of cooking, fully embracing the Roman way of seasoning and spicing of foods. The Historian Francis Pryor goes on to say about this, “It would seem that they [Anglo-Saxons] liked the food of the people they overran so much that they went to the trouble of imitating a Roman mortar in their own pottery workshops.”

This is all a long way from what earlier historians had thought happened, namely that the Anglo-Saxon people invaded and stood self-sufficient and apart from their Celtic neighbours, whom they pushed out of Southern England in the fourth and fifth centuries. Historian Nicholas Higham, “This continuity of habitat and rural activity is a crucial component of our revised perception of Roman-British/Saxon interface and is entirely incompatible with the notion of wholesale depopulation on the eve of, or in the course of, Anglo-Saxon settlement.”

Yet there is also no doubt that the date 410 A.D. was momentous for Britain, a genuine turning point for the Romano-Celts in the south, Alaric the Goth had sacked Rome and the last two Roman British legions departed to protect what was left of the Empire; Emperor Honorius wrote to the leading citizens of Britania explaining that Rome was unable to protect them, he told them that they would have to defend themselves against the barbaric incursions from the east … from then on four cultures shared these islands.

Food and feasting have always been ways for the ruling elite (of whatever age, complexity and scale) to impress guests and ensure their continued pre-eminence and fealty of their subjects. Which is why they are so popular in song, tale and the earliest British manuscripts. Unfortunately, everything but the food is normally discussed in these tales, with only the briefest descriptions of ‘abundance’ and ‘indulgence’ giving us any idea of the importance of food at a feast. It was not what was served, but what impression it made. Descriptions of Anglo-Saxon feasts that have survived in written form are no different in this regard.