Although Beowulf, the last Anglo-Saxon source we shall look at, does not describe the food the warriors eat, it does give us an idea of the grand occasion of feasting in an Anglo-Saxon hall. It also clearly expresses the duty of the Lord to feed, keep and reward his men, in return for their service. Songs, harps and story-telling are an important part of a feast, as is the strict hierarchy and order of eating and particularly drinking, with honour and rank deciding the seating plan and who gets served food and drink first (along the mead seats). The poem and poet is English, (although describing events of the Danes and Geats) and given that many writers write from their own experiences we can be reasonably sure that this tale would have been told as entertainment in an English hall, at a feast just like the one in the poem …

Beowulf is the conventionally used titleof an Old English (Anglo-Saxon) heroic epic poem consisting of 3182 alliterative lines. The poem, although written in England, is set in Scandinavia, and it is commonly cited as one of the most important works of Anglo-Saxon literature. It survives in a single manuscript known as the Nowell Codex and was thought to be composed by an anonymous Anglo-Saxon poet, or series of poets adapting and evolving an older tale, it is nominally dated between the 8th and the early 11th century. 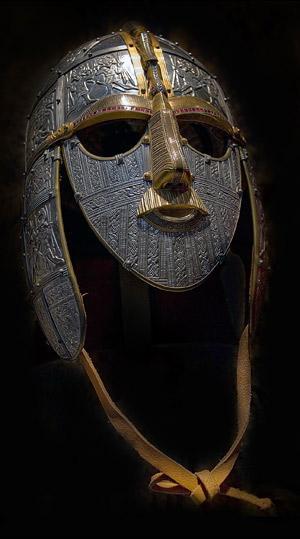 Where we are in poem: After Grendel kills all the revelers in Hrothgar’s new hall the hero, Beowulf, comes to challenge the monster … but first Hrothgar and his Queen honour him with a feast …

Then was laughter of liegemen loud resounding
with winsome words. Came Wealhtheow forth,
queen of Hrothgar, heedful of courtesy,
gold-decked, greeting the guests in hall;
and the high-born lady handed the cup
first to the East-Danes’ heir and warden,
bade him be blithe at the beer-carouse,
the land’s beloved one. Lustily took he
banquet and beaker, battle-famed king.

Through the hall then went the Helmings’ Lady,
to younger and older everywhere
carried the cup, till come the moment
when the ring-graced queen, the royal-hearted,
to Beowulf bore the beaker of mead.
She greeted the Geats’ lord, God she thanked,
in wisdom’s words, that her will was granted,
that at last on a hero her hope could lean
for comfort in terrors. The cup he took,
hardy-in-war, from Wealhtheow’s hand,

THERE was hurry and hest in Heorot now
for hands to bedeck it, and dense was the throng
of men and women the wine-hall to cleanse,
the guest-room to garnish. Gold-gay shone the hangings
that were wove on the wall, and wonders many
to delight each mortal that looks upon them.

Arrived was the hour
when to hall proceeded Healfdene’s son:
the king himself would sit to banquet.
Ne’er heard I of host in haughtier throng
more graciously gathered round giver-of-rings!
Bowed then to bench those bearers-of-glory,
fain of the feasting. Featly received
many a mead-cup the mighty-in-spirit,
kinsmen who sat in the sumptuous hall,
Hrothgar and Hrothulf. Heorot now
was filled with friends; the folk of Scyldings

Then song and music mingled sounds
in the presence of Healfdene’s head-of-armies
and harping was heard with the hero-lay
as Hrothgar’s singer the hall-joy woke
along the mead-seats, making his song
of that sudden raid on the sons of Finn.

As briefly explained earlier most of the extant Anglo-Saxon literature, as shown in this famous example, mainly used the symbolism of food and drink to explain the social hierarchy of the day. Who sat where, who got fed first, (in what order) and who got the ‘choicest foods’, delicacies, cuts of meat etc. were all dependant on the rank and the perceived importance (and therefore power) of the person in the household, or the guest at a gathering. Feeding your guests well (and understanding the dining etiquette of the day) was essential for an upwardly mobile class hoping to join the ranks of the nobility.

Beowulf clearly shows how complex, evolved and rigid were the customs of Anglo-Saxon feasting (although the poem is set in Scandinavia the poet would have coloured the description and language from his own experiences of Anglo-Saxon life in England). Yet the poem also displays the warmth, graciousness, joy and almost courtly manners of the feasters, a display of courtesy similarly seen in later Medieval Romances. And one last thing that we can perhaps take away from the poem is the importance of mead and beer to the feast; with it having a deep ritualistic significance beyond the mundane act of drinking.