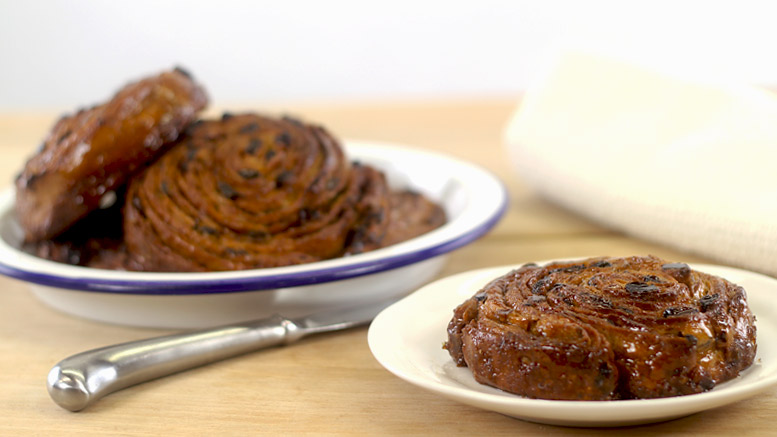 Gloucester Lardy Cakes were once a very popular regional lardy cake, made with a yeast bun dough, which soon spread out from Gloucestershire to neighbouring counties due to their popularity. They are similar to the Gloucester Drip but are traditionally baked in round pots, thickly larded, to seal in the lard as they bake, and for the bun dough to absorb the lard and sugar. Today we can use small heat-proof pots, or small cake tins, or an extra-large muffin tin to achieve the same effect. In some bakeries they dispensed with the expense of the pots, and just baked them off in a roasting tin, side by side, similar to the Chelsea Bun, but this lets the lard run away from the cakes as they bake – proper lardy cakes from Gloucester are round in shape, and are saturated (and glazed) in the sugar and lard as they bake.

Makes 6 Lardy Cakes. In the photos we have doubled the ingredients to make 12. The secret to a wonderful and moist Lardy Cake from Gloucester is using great lard (from Gloucester Old Spots) and getting lots of layers into the roll before baking.

For the 6 baking tins

For the bun glaze

For the dough: In a jug pour in 25oml of warmed milk, stir in a large pinch of brown sugar, then add the yeast, and stir. Leave this somewhere warm for ten minutes so that the yeast can activate and froth up.

In a large mixing bowl sift in the flour, scatter in the salt and mix. Make a well in the centre. When the yeast is ready pour it into the well and start to mix, add the melted lard and bring it into a silky and smooth dough – add more flour or milk if necessary. Turn the dough out onto a floured work surface and knead in the dried fruit. Once silky and smooth (and well kneaded) shape the dough into a ball, place it into a bowl, cover and leave somewhere warm for an hour or two until the bun dough rises to almost double in size. 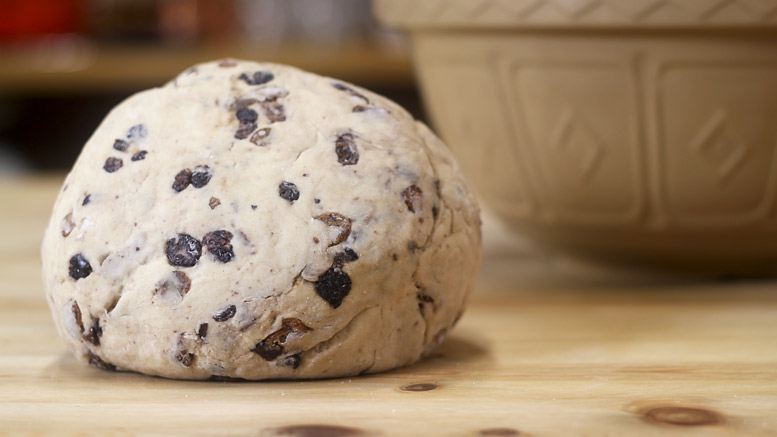 Prepare the tins or pots: Take six small (5cm) cake tins, or six small heat-proof pots – or even an extra large muffin tin with six holes. Heavily grease these pans or tins thickly with lard. Sprinkle in a little soft brown sugar to stick to the lard. When baking the lard should not escape from the tins, so seal using foil if needed. Place the six small tins on a baking tray, to catch any leaks or over-spill when in the oven.

To make the Gloucester Lardy Cakes: this traditional baker’s method puts lots of layers into the Lardy Cake, folding as for puff pastry. On a floured work surface roll out the dough to a large rectangle. Evenly spread over two-thirds of its surface a 1/3rd of the lard and soft brown sugar and mixed spice – keep the third of the dough furthest away from you clear. Fold the plain dough (1/3rd) which had nothing spread on it, over towards you, to cover the middle third. Fold the closest third of the rectangle up and away from you, to cover the first fold, making a long, neat sandwich.

Making The Gloucester Lardy Cakes - Rolling Out & Spreading The Lard 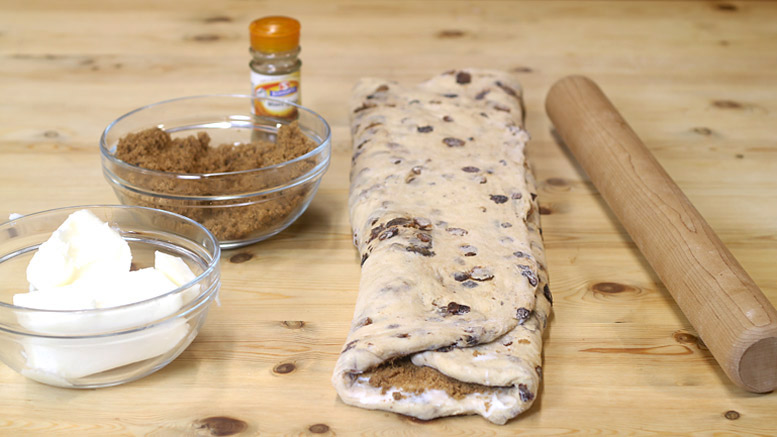 Turn the dough a half turn, so that the long rectangle sandwich is now positioned lengthways away from you. Fold it over in half, and roll this out, back into a large rectangle. Do the same as before. Evenly spread over two-thirds of its surface the next 1/3rd of the lard and soft brown sugar and mixed spice – keep the third of the dough furthest away from you clear. Fold the plain dough (1/3rd) which had nothing spread on it, over towards you, to cover the middle third of the rectangle. Fold the closest third of the rectangle up and away from you, to cover the first fold, making a long, neat sandwich.

Turn the dough a half turn, so that the long rectangle sandwich is now positioned lengthways away from you. Fold it over in half, and roll this out, back into a large rectangle. Once in a rectangle spread over all the remaining lard, brown sugar and mixed spice – roll this rectangle up, starting with a short edge, making it into a log, like a swiss-roll. Cut this equally into 6 pieces. Place each of the lardy cake pieces, cut side down, into the thickly larded tins. Place them somewhere warm and allow them to have a second rise and fill the tins as they prove (30 to 45 minutes) 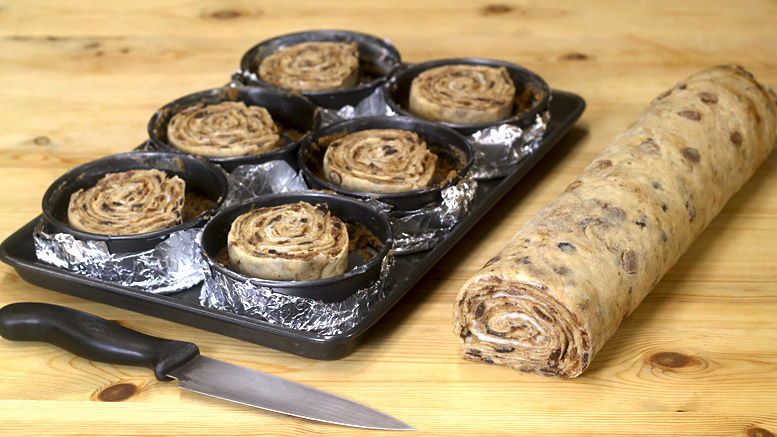 Preheat the oven to 210C

Bake the Lardy Cakes: Place the tray with the six Gloucester Lardy Cakes into the oven and bake at 210C for about 40 to 50 minutes. The lardy cakes will rise, and further expand into the tins, and go golden to dark brown, once they are fully baked remove them from the oven. Leave them cool just for 5 minutes. They need to be turned out from their pots or tins quite quickly otherwise they will stick. ! Be careful as you turn them out, the lard and sugar will be hot (and sometimes runny) and it can burn if you are not careful ! Put a plate over each one and turn them over to get the Lardy Cakes out. Allow to cool and serve.

A commercial baker’s will very often glaze their buns, making them glisten in the window with sticky, sweetened tops. The traditional Baker’s Bun Glaze: heat together 2 tbsp of golden syrup (or 2 tbsp of soft brown sugar) with 2 tbsp of water and brush over. 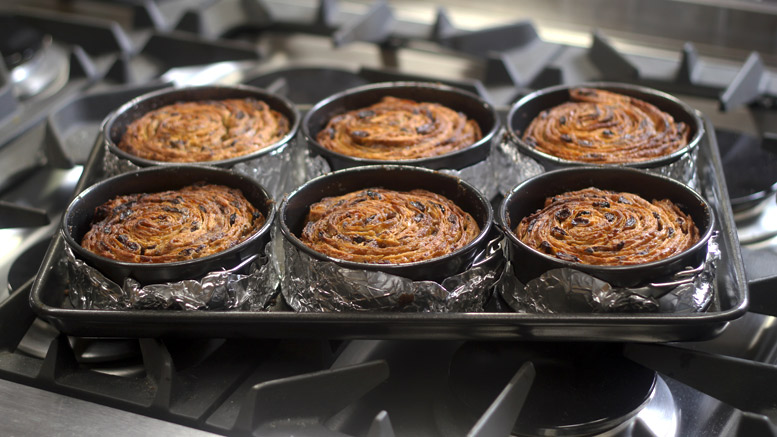 Gloucester Lardy Cakes Baked And Out Of The Oven