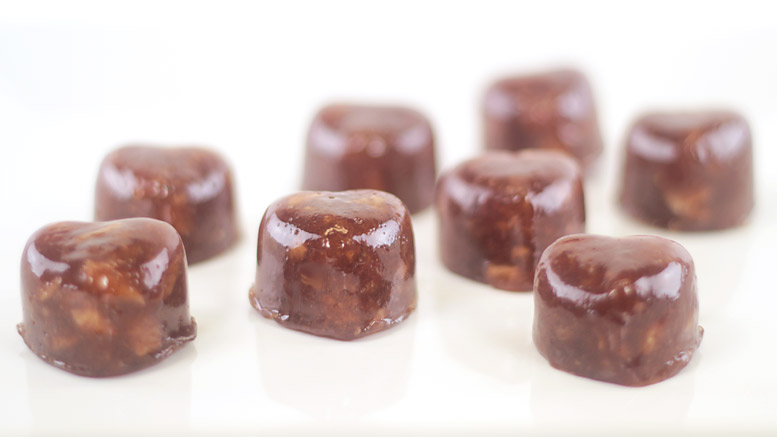 Even though medieval recipes for Gyngerbrede (or gingerbrede) do include ‘breadcrumbs’ and ‘ginger’, it is nothing like a modern ‘gingerbread’, which is soft and cake like, with a hint of ginger warming the mouth. A medieval gingerbread is a hard honey paste cut into small squares, and flavoured with spices. It is far more like a traditional boiled sweet / toffee, or Tudor ‘comfit’, than a cake or bread. Peter Brears, in his work ‘Cooking and Dinning in Medieval England’, has this to say about them, “[they were] honey-sweetened and with the ability to release their flavour a few moments after they had been placed in the mouth. The simplest were made as a straightforward blend of honey, ginger and bread”. These were palate cleansers, usually served at the end of a meal (at the ‘Void’) with wine, or during the remove or entremet of each food course at a Banquet.

Take goode honye & clarefie it on þe fere, & take fayre paynemayn or wastel brede & grate it, & caste it into þe boylenge hony, & stere it well togyder faste with a sklyse þat it bren not to þe vessell. & þanne take it doun and put þerin ginger, long pepere & saundres, & tempere it up with þin handes & than put hem to a flatt boyste & straw þeron sugar & pick þerin clowes rounde aboute by þe egge and in þe mydes, if it plece you.

The recipes direct that the gingerbreads should be shaped into small squares and cut – “þen make yt square, lyke as þou wolt leche yt”. However, we are going to make them into another favourite Medieval shape, the heart, a more romantic looking shape altogether. This is because of the colour we are going to give them; the manuscript also gives us the advice of colouring the gingerbreads red, with saundres (a ground sandle-wood and common medieval red colourant) which gives us the opportunity to make a simple, little medieval ‘subtlety’.

Honey, when boiled, will easily reach a hard-crack stage, (even easier than sugar) and when fully cools it sets into a brittle ‘toffee’; while boiled to the ‘soft-crack’ stage honey will remain soft and pliable, and be able to be moulded then cut as it continues to firm up. The harder you boil the honey the harder the set will be. For the heart shaped moulds we are boiling the honey aggressively, then letting it cool down before pouring into moulds, so it sets, for stamping the heart shapes out with a cutter we are not boiling the honey so aggressively, so it remains soft.

In the medieval period gingerbreads were made by either kneading and then shaping it, (“tempere it up with þin handes & than put hem to a flatt boyste”) or by pouring the still liquid syrup (having reached a ‘hard-crack’) into hand-carved wooden moulds, (like they did with sugar) or it was worked like toffee, pulled against hooks into long strands, which were re-gathered and re-pulled, to be moulded into wooden boxes to make a square shape, which was later cut up. However, if you do not use dry (stale) breadcrumbs, and instead use soft (fresh) broken bread cut up, you will just end up with a sticky mess because too much moisture is added into the honey syrup – the medieval recipe calls for bread to be grated, indicating the stale nature of the small breadcrumbs used.

We are using sanders (ground sandlewood) to colour our gyngerbrede subtlety, it darkens it quite considerably and changes it to a rusty red-brown, but you can use a natural red food colourant. 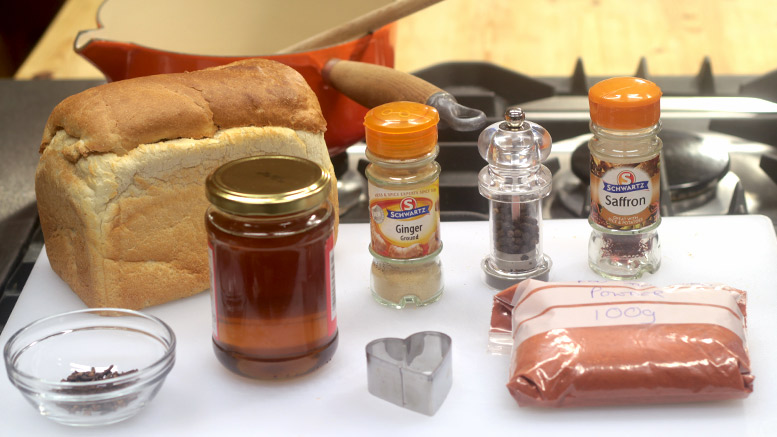 To make fine stale breadcrumbs. This recipe needs very fine and very dry breadcrumbs to work. You can buy fine breadcrumbs but to make your own cut out 30g of bread from an un-sliced white loaf (it will lose weight as it dries out) from the crusts and place this in the fridge overnight (uncovered) to completely dry out, 0r place the bread in a very low oven for half an hour the night before. Next day, using a fine grater, grate the dried out bread into fine breadcrumbs, remove any larger pieces so they are all uniformly small.

Making the Gingerbread:  In a tall non-stick saucepan (a jam pan or preserving pan is excellent to use) bring the honey up to a slow rolling boil. Stir continuously for the first minute then stop stirring and turn the heat down slightly. What we are looking for: the liquid honey will start to expand and turn to a ‘froth’, slowly bubbling and rolling over in the pan (which is why you need a tall pan) – we now have to watch this and smell this – we don’t want it to reach a fast rolling boil. If you think it needs a stir, then stir it – if it starts to smell ‘burnt’ then get it off the heat immediately, immerse the pan in cold water, and stir continuously. We only need about 90 seconds of slow rolling boiling at this stage, and the honey is now ‘done’. If you want a firmer ‘hard-crack’ to set the honey then boil it for longer at a higher temperature, which reaches a more aggressive rolling boil – use a boiled sweet or jam thermometer to make sure the hard crack stage is reached. 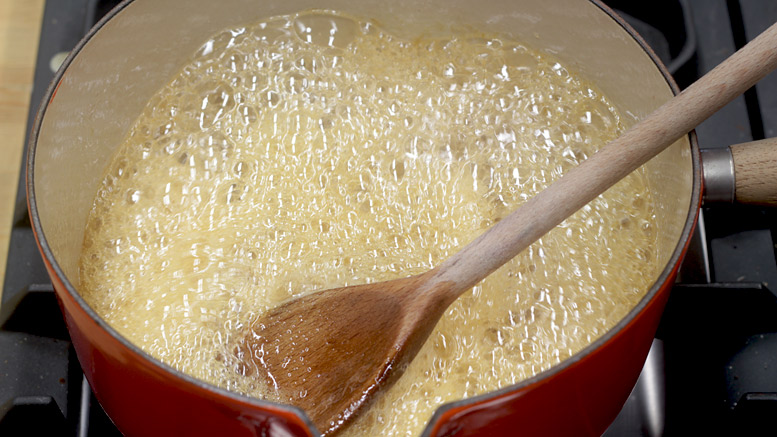 Turn the heat off (the froth turns back to a sticky liquid) and after two or three minutes add in the stale bread crumbs, stir to thicken. Use a knife to cut the saffron strands up very fine, grind the two black pepper corns into powder. Add in the saffron, black pepper, ground ginger and sanders (or red food colour) and stir this in fully.

Using a mould: Boiled sweets and other boiled sugars were once poured into carved wooden moulds to set into shapes, here we are using a modern silicon ice cube tray, one with heart shapes. Spoon in a small amount of the cooled gingerbread (not too hot or it will melt the mould) in to each mould to cover the bottom and form the heart shape, they do not need to be too thick. When cooled and firmed up (at least two hours) pop them out on to a plate and serve. They are quite sticky even when solid. 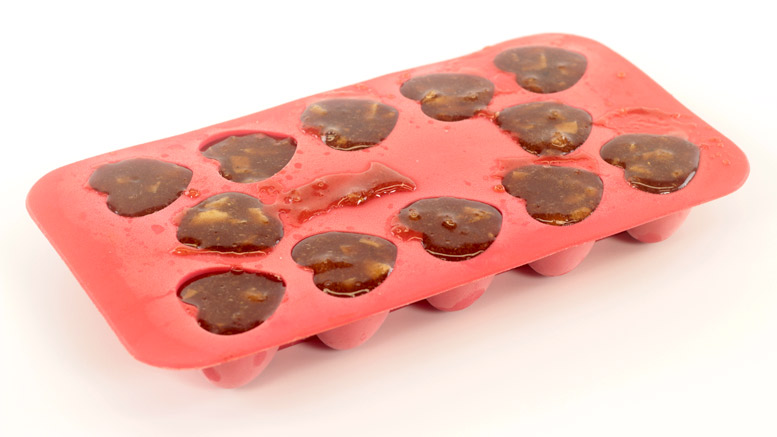 Using a cutter: Pour out the gingerbread on to a cold marble slate, or a cold metal non-stick tray. Spread the gingerbread out thinly, to about 5mm thick, then leave to slightly harden, (about 4 minutes). If it is too thick (chargeaunt) to spread let it cool a little then work it between your hands, letting the heat of your hands keep it warm and pliable, (use thin plastic food prep gloves) then roll it out with a rolling pin. Use a small heart shaped pastry cutter to stamp out the shape. Leave to fully harden (at least 2 hours). Stud the hearts with a clove to garnish (which you should remove to eat). They are quite sticky even when solid. 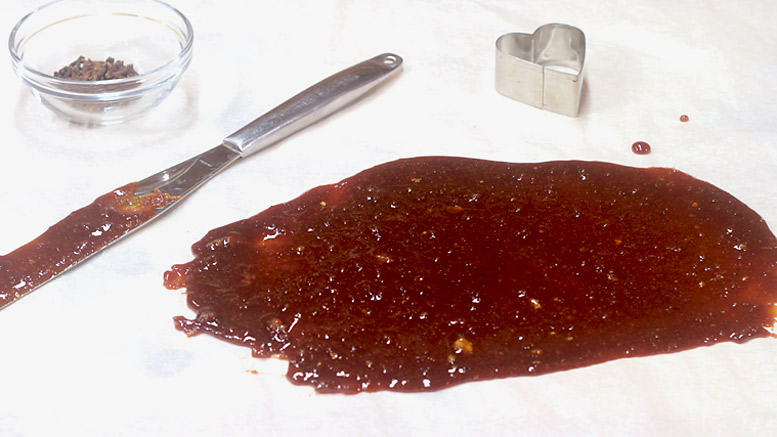 Cutting Out The Gyngerbrede Heart Shapes