Haggis has been romanticised recently, with people showing an interest in both Scottish culture and heritage, but the original recipe has also been sanitised for the modern supermarket buyer; with modern versions totally altering the basic nature of the Haggis; i.e. by using cuts of meat which would never have been used in an authentic recipe, and by using synthetic ‘skins’ to package it in, ready for boiling.

A Traditional Haggis. For hundreds of years Haggis was a way for a Scottish farmer or crofter to use up the lights (lungs) of a sheep, together with the heart and liver – ingredients which will quickly spoil and go off, unlike the denser meat of the animal. And while to modern sensibilities offal is now no longer eaten in the same quantities, nothing in the Highlands of Scotland could be afforded to be wasted, and this was especially true of food, where starvation and malnutrition was common. So Haggis is offal based, but it is actually a very tasty, satisfying and savoury dish, one which should be tried in its authentic guise, and on Burns Night is a great way to eat it.

A Burns supper is a celebration of the life and poetry of the Scottish poet Robert Burns, author of many poems. The suppers are normally held on or near the poet’s birthday, 25 January, commonly known as Burns Night (Burns Nicht), although they may in principle be held at any time of the year, and Haggis is a traditional dish on Burns Night. 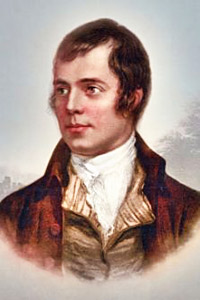 Address to a Haggis by Robert Burns

Ye Pow’rs, wha mak mankind your care,
And dish them out their bill o fare,
Auld Scotland wants nae skinking ware
That jaups in luggies:
But, if Ye wish her gratefu prayer,
Gie her a Haggis!

Some hae meat and canna eat,
And some wad eat that want it;
But we hae meat, and we can eat,
And sae let the Lord be thankit.

The first recipe for Haggis (written down) can actually be found in a Medieval Lancashire cookbook (from the North of England) in the 1430 manuscript, “Liber Cure Cocorum“. Gervais Markham, in 1615, also records the Haggis as a recipe in his book, ‘The English Huswife’. Both sources as evidence tell us that this was not just a dish particular to Scotland, (many other nations have similar recipes dating back many hundreds if not thousands of years) although it must be said it is Scotland where the Haggis has the deepest and most traditional roots.

Haggas / Haggus Recipe 1615: “The use and vertues of these two severall kinds of Oate-meales in maintaining the Family, they are so many (according to the many customes of many Nations) that it is almost impossible to recken all; … oat-meale mixed with blood, and the Liver of either Sheepe, Calfe or Swine, maketh that pudding which is called the Haggas or Haggus, of whose goodnesse it is in vaine to boast, because there is hardly to be found a man that doth not affect them.” Gervais Markham 1615.

Talking to your butcher: there is no way you can make this recipe without first talking to your local butcher, with several days in advance, particularly around Burn’s Night, New Year’s Day or St. Andrew’s Day … your butcher needs to be able to source and certify the specialist offal that you are buying from his suppliers, and this needs advance notice. You need to order the lamb paunch (stomach), lights (lungs), heart and liver, as well as the beef suet (if deciding to use fresh suet). By ordering it in advance you can also save time and ask your butcher to clean and trim all the offal up and wash out the paunch ready for you to use. Note: You also need all the ingredients at least the day before serving.

The following recipe is faithful to a Scottish Haggis, those eaten by the richest Laird and the poorest crofter. All the ingredients are boiled in a sheep’s ‘paunch’ (or stomach) and when cooked the paunch is split open and the Haggis filling is eaten, traditionally with boiled and mashed swede, (Haggis and Neeps).

1. Prepare the lamb’s paunch (stomach) by washing it out under clean running water, then stirring 3 tablespoons of salt into 2.5 litres of cold water in a clean plastic bucket and soaking the paunch in it overnight.

2. Prepare the lamb lights (lungs) and heart. Wash the lungs and heart under clean running water and place them in a large saucepan, cover with cold water and a tablespoon of sea salt, bring to the boil, turn the heat down and simmer for 45 minutes. After 45 minutes drain the lights and heart well and place into a bowl, when cool put them in the fridge to be used the next day.

Turn the soaked paunch inside out and rinse under cold running water for at least ten minutes, to wash all the salt water off it. Then set aside to drain as you make the filling.

If you are using fresh beef suet shred it very small, almost to breadcrumbs (it should shred easily) and reserve in a very large mixing bowl – if using packet suet add it into the bowl.

Cut half the liver into 1.5 cm cubes while the other half should be cut up very fine or coarsely minced. Add this to the suet in the large mixing bowl.

Cut the lights and heart up very small or coarsely mince. Add this to the large mixing bowl with everything else.

Into the bowl add and thoroughly mix each ingredient in – the fine chopped onions, the oatmeal, the herbs and spices and then finally stir in the stock.

Make sure everything in the bowl is mixed thoroughly and no one ingredient is clumping together.

Using a spoon put the Haggis filling into the prepared lamb’s paunch (turned back the right way out). Once put in sew up the opening with linen thread or thin butchers string. Note: The paunch must not be too tightly packed or it will burst as the oatmeal swells during cooking after absorbing the stock.

Put the Haggis in a large saucepan of boiling water and simmer gently for 3 to 4 hours. Using a sharp needle prick the paunch once or twice in the first hour to allow steam to escape and prevent the Haggis from bursting.

After 3 or 4 hours serve the Haggis turned out of the paunch on to a large dish and serve with mashed swede.