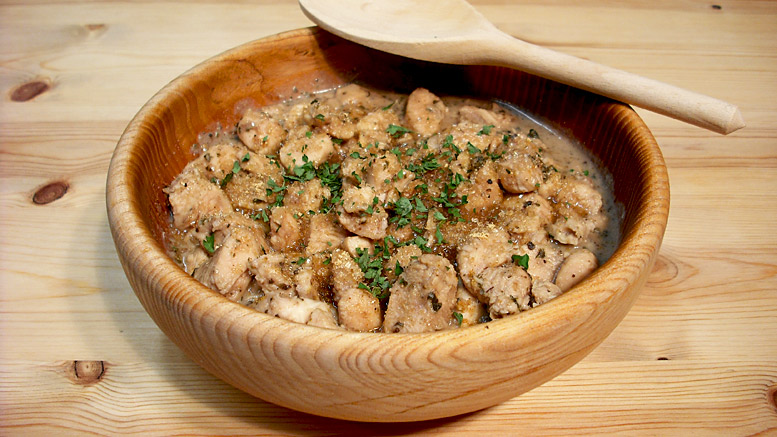 A Medieval Dish - Henne In Bokenade

Henne In Bokenade is a Chicken dish made from a 15th Century medieval receipt (recipe) and to thicken a dish like this in the Medieval period either ground almonds, (almond milk) or egg yolk was used as a common thickening agent. A dish of this sort was very popular in Medieval England, with Bokenade originally being a dish of stewed veal – later the idea came to include other meats, such as chicken. It is normally placed as a ‘side dish’ to the main roast meats of the first course, or in larger quantities, used as a main dish itself within a course.

In esssense a Bokenade (or Buknade) is a gently spiced and thickened chicken stock (broth) with chicken pieces and there are two recipes given which we looked at in detail, both coming from ‘Two-Fifteenth-Century Cookery-Books’ – the title of which comes from combining two unnamed medieval manuscripts, Harleian MSS. 279 and 4016, kept in the British Museum, and dated 1430 and 1450 AD. We will be making the Auter Maner Buknade, from Harl 4016.

Tasting Notes: This was very nice after the full hour of simmering, the herbs and spices had mellowed and the broth had developed a maturity which was lacking in it after the first ten minutes, (when the ground cloves and mace dominated the taste) therefore this broth needs at least an hour to cook out, and will improve again if reheated from cold the next day. At the time of serving there was a sweetness and mellowness about the dish, with a nice subtle taste of almonds and wine. As a dish among several in a medieval course it is highly recommended, and it would go very well with fresh breads. If you want a very thick broth do not strain out the ground almonds, but leave them in. 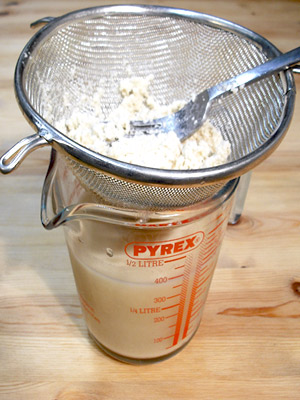 Auter maner buknade. Take rawe Almondes, and blanche hem, and grynde hem, and draw hem thorgh a streynour with fresh broth and wyne into good stiff mylke; And then take veel, kyde, or hen, and parboile hem in fressh brothe, and pike hem clene, and cast him thereto; take Clowes, maces, and herbes, and lete hem boile ynowe; And then caste a litull Sugur, pouder ginger, and salt, and serue him forth.

If you want to, use veal or goat meat to replace the chicken.

Ingredients For Henne In Bokenade

Put the strained ‘mylke’ into a saucepan and bring to a simmer below the boil. Add the parsley, sage, mace, and cloves, and three-quarters of the sugar, ginger and salt, (keep a small pinch of each reserved) and stir them in. Then dice the chicken breasts small and add them to this broth. Keep the broth at a gentle simmer for 60 minutes to fully cook the chicken and let the herbs and spices develop and mellow. Stir occasionally. If left on a low heat you could put the bokenade ingredients into a casserole dish with the lid on and put it into an oven at 160C for two hours. 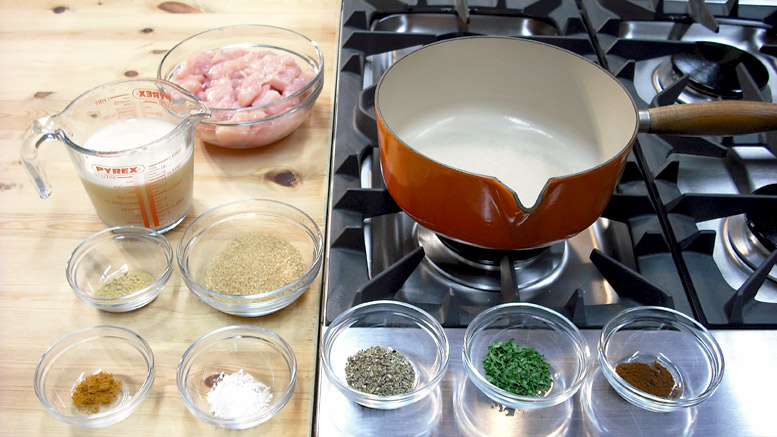 Making The Henne In Bokenade

After an hour bring the broth up to a boil to reduce the stock by one-third to thicken it (or add some of the reserved ground almonds). When it is thickened remove from the saucepan to a serving bowl and sprinkle over the remaining pinch of salt, sugar and ginger.