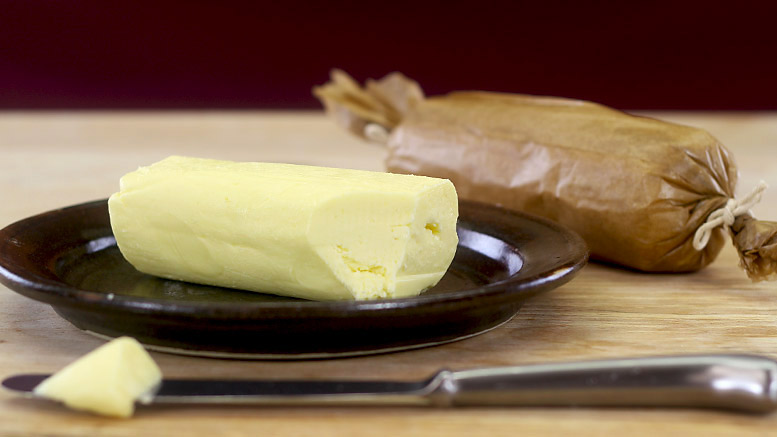 Home-made Butter - Ready To Spread And Ready To Store

Home-made Butter is delicious and creamy, and if using a modern machine it can be made in just ten minutes, using only double (heavy) cream; making it by a very simple method used in the Dark-Ages, it will be about 30 minutes, (and a lot of sweat later). Although today we keep butter in the fridge to preserve it, in Ireland, to store butter, it was often packed into wooden barrels, called firkins, which were then buried in a peat bogs, sometimes for years. Such bog butter would develop a strong flavour as it aged, but it would remain edible and unspoiled due to the lack of oxygen, and therefore lack of bacteria, in the peat bogs. “Butter sunk under/More than a hundred years/was recovered salty and white.” the Irish poet, Seamus Heaney, ‘Bogland’.

As a note: When the cream separates out it forms butter and a milky, watery liquid called buttermilk. If we used unpasteurised cream we could leave the butter milk out in a sealed jar, with a little milk, and after it has soured and thickened we could use it in baking, or make clabber from it. However most cream sold is pasteurised and does not have the bacteria in it that we need.

Making butter by hand (we have done it) can be a laborious, although a very healthy exercise activity. Sealed clay jars, or cured animal skins, would have been used in the Dark Ages … we need to pour our double cream (330ml) into a 500ml wide-necked jar with a screw top lid that can fully seal – the cream should not fill the jar as we need the space, and the neck needs to be wide enough to get the butter out. Leave the jar somewhere warm for 30 minutes to bring the cream up to room temperature. Then shake. That’s it. Just shake … Only it is not as easy as that, you need to shake, and shake, and shake, the jar for about 20 to 30 minutes, (it is quicker if done on a hot day). The cream will go through the stages outlined in the recipe below, to become butter. By which stage you will have had the best work-out ever and your arms will feel like jelly. If you are strong and fit you can pour more cream into a larger jar. To make it easier there are also old fashioned wooden butter churns (butter churns have been used successfully for hundreds and hundreds of years) to buy and have a go at making butter in – we have a very old butter churn which still works fantastically well.

A machine that can whisk in a ‘planetary’ motion, with a large balloon whisk, like a Kitchen Aid or a Kenwood etc. is best but you can make it with a hand held electric whisk. Making it with a modern machine is simply child’s play. There are a few stages to watch out for, and these are outlined below, but basically the machine does all the heavy lifting.

1 Litre of double cream makes just under 500g of butter. If making unsalted butter the salt can be omitted.

Recommended: a planetary whisking machine that has a guard fitted to keep the separated water (buttermilk) from splashing out when the cream separates (you can at the later stages wrap a clean tea-towl around the bowl if you do not have the guard). 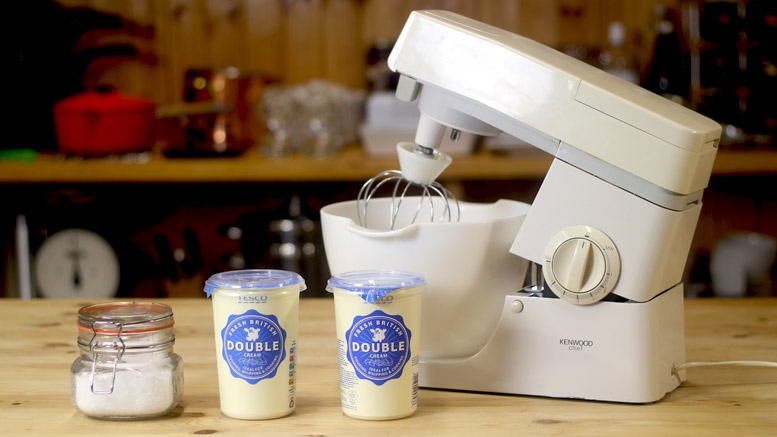 Everything Needed To Make Butter

Allow the cream to reach room temperature before beginning. Pour the double cream into the bowl of the machine. Set the machine on a gentle whisk at first to get a little bit of air into it. After the first minute turn the machine up, then after a few minutes turn it up to a faster speed (so it is whisking quite fast). What you will notice is that the cream will thicken, so that it starts to hold soft peaks, then a firmer peak is maintained – this is usually when you turn the machine off and use the whipped cream in a recipe – however we are pushing past this stage. Turn the machine speed up.

It is at this stage that the guard comes in handy to stop splashes. Past the clotted cream stage you will see the cream collapse and go to a runny liquid,  almost as if it reverts back to double cream – this is when the butter is made – push past this stage and not long after inside the balloon whisk a butter will form while the watery liquid is spat out (buttermilk). Check, but within a minute you will have made all the butter you are going to. 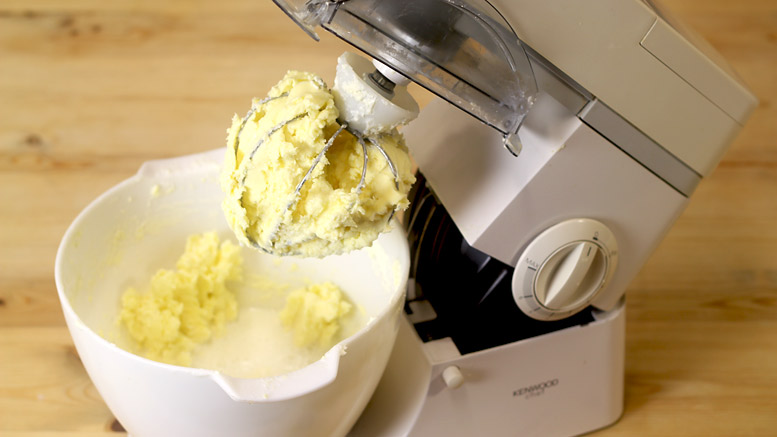 The Butter Formed And The Buttermilk Separated Out

Take the butter out of the bowl, and out of the balloon whisk, and place it in a bowl of very cold water – it will be very nearly 500g worth. Squeeze the butter between your hands (or use some old fashioned butter paddles) this removes the last of buttermilk making a very compact butter – this is now ‘unsalted butter’ and it is ready for shaping and using. 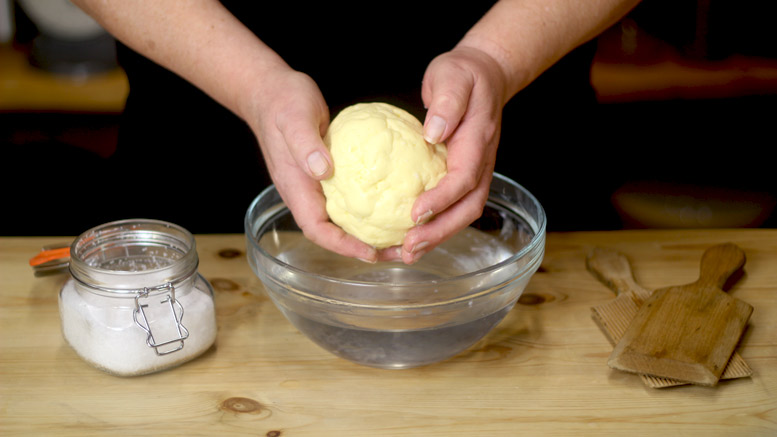 Squeezing The Buttermilk Out

If you want a salted butter grind 1/2 tbsp of sea-salt flakes into a fine powder (sea-salt is much better tasting than common table salt). Spread the butter out on to a clean and sealed work-surface, or a large clean non-stick baking sheet. Sprinkle the salt salt over the butter and work it into it until it is evenly distributed – we use butter paddles as it is easy to do with these – this is now ‘salted butter’ and it is ready for shaping and using. 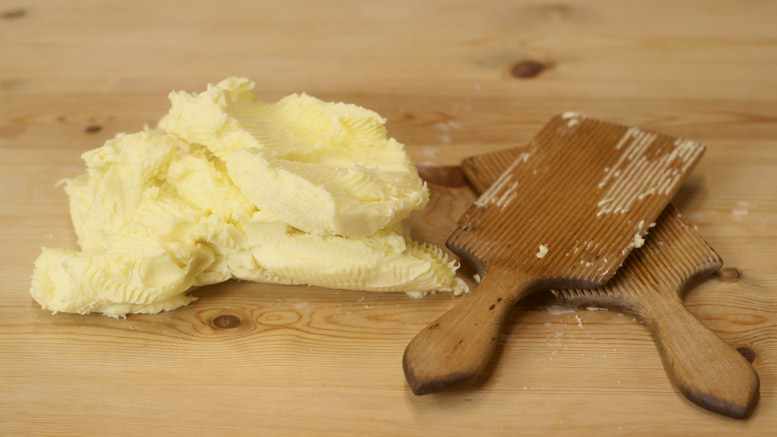