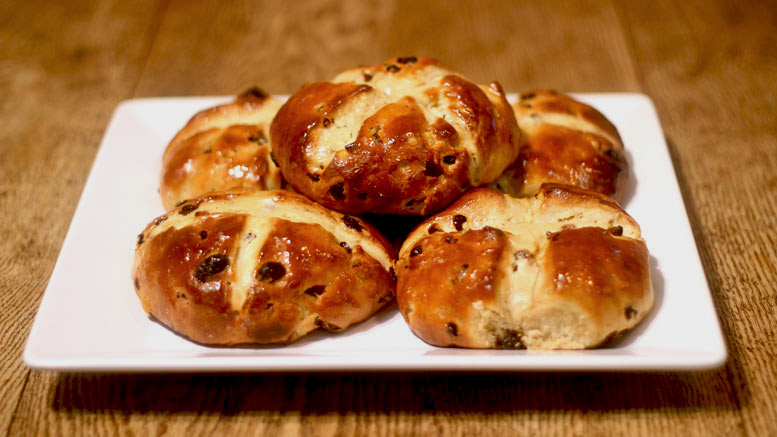 Hot Cross Buns, “are of the usual form of buns; though they are distinguished from them inwardly by a sweeter taste, and the flavour of all-spice, and outwardly by the mark or sign of the cross”, says W. Hone in ‘The Everyday Book’, published in 1836. Read more on the History Of The Hot Cross Bun. Today, along with the marking of the cross, traditional recipes for Hot Cross Buns do have several other notable things in common:

The recipe given below faithfully makes Hot Cross Buns in this traditional manner. To read more original recipes for Hot Cross Buns from the 1800s please see the next page of this recipe.

Making The Cross: To make the cross this recipe uses a soft-sweet white pastry, (piped over into a cross cut into the bun). This now makes what we think of as a typical and ‘traditional’ look for a Hot Cross Bun. Yet the earliest recipes, as seen in the Good Friday Buns only ever displayed the cross as a plain ‘cut’ (or depression) made into the dough before baking (a method dating back to before Medieval times).

For The Bun Glaze

In a medium sized bowl, whisk the egg with the warm milk (30C) to give about 275ml of liquid. Next whisk in the sugar, the 50g of flour (mix the flour with 2 tablespoons of milk first to make a paste) and then whisk in the yeast. Leave this ferment covered for 30 minutes in a warm place.

Sieve the main flour into a large mixing bowl and sprinkle in the ground mixed spice and the ground sea salt, rub in the butter until the flour resembles fine breadcrumbs. This could take 5 minutes to get a really fine mixture. Then mix in the sugar and grated lemon zest.

Make a well in the centre and gently pour in the yeast ferment (after it has had 30 minutes). Gradually draw in the flour with a wooden spoon and mix until it comes away from the sides of the bowl cleanly and forms a dough – finish it off by mixing it together with your fingers – add in a little extra flour or milk if it needs it. 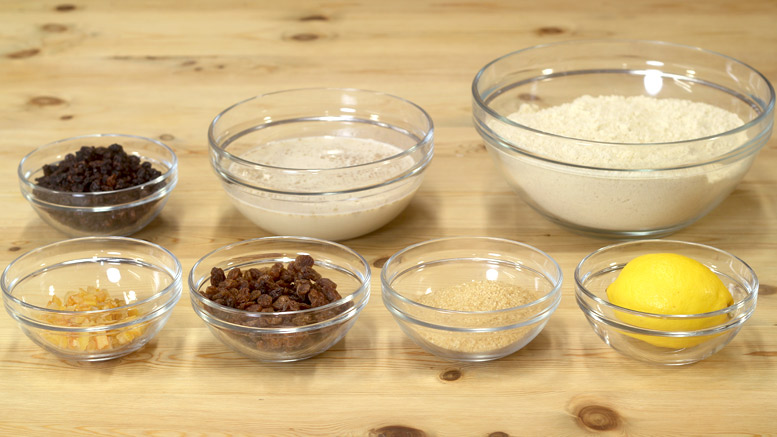 The Ferment, Flour Mixture, And Dried Fruit, Ready To Be Brough Into A Dough

Place the dough on a lightly floured work surface then knead the plain dough (about 5 minutes) until it becomes firm, smooth, silky and elastic. If the dough is still a little wet add in a small amount of plain flour as you knead, but don’t add in too much. Once you can press a finger into the dough, and it springs back, it is ready.

Once the dough is smooth and elastic work in the dried fruit (currants, sultanas, and mixed peel). Do this by spreading the dough out into a large rectangle, and using one-third of the fruit at a time, add it to the centre of the dough. Fold the dough up and over to enclose the fruit, and knead. Repeat until all of the dried fruit has been included. Knead gently for a few more minutes to evenly distribute the dried fruit. Shape the dough into a ball and place it back into the bowl, cover over with a clean cloth and put to rise in a warm place for 90 to 120 minutes (2 hours). 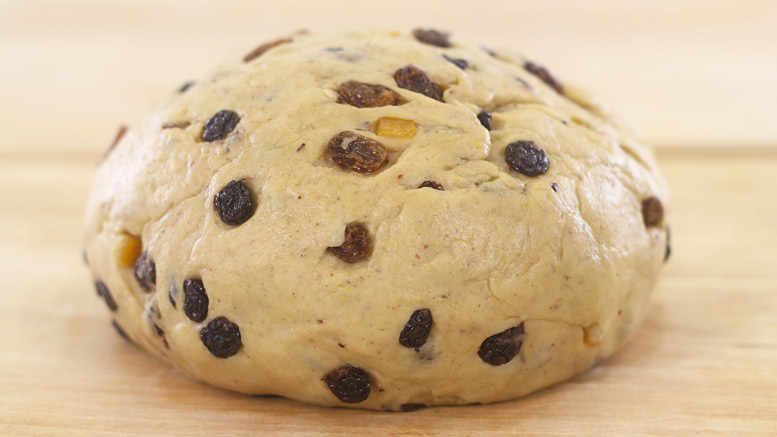 After 90 minutes turn the risen dough out onto a lightly floured work surface and gently knead to knock any excess air out and get the dough back into an even texture once more. Shape the speckled dough back into a ball, put it back into the bowl, cover over and leave somewhere warm for another 30 minutes.

Turn out the dough onto a lightly floured work surface and divide it into 8 equal pieces – the dough will weigh about 1600g so each bun should be 200g. Roll each piece into a ball, then flatten them slightly into a ‘bun’ shape using the palms of your hands.

Grease a baking tray with butter and carefully transfer the buns to the tray – before putting them on the tray use a very sharp knife and cut a shallow cross into the dough, from edge to edge. Cover and place the baking tray somewhere warm – a good tip is to place the tray inside a large polythene bag. Tie or fold over the end of the bag and set aside in a warm place for a further 40 minutes to rise. 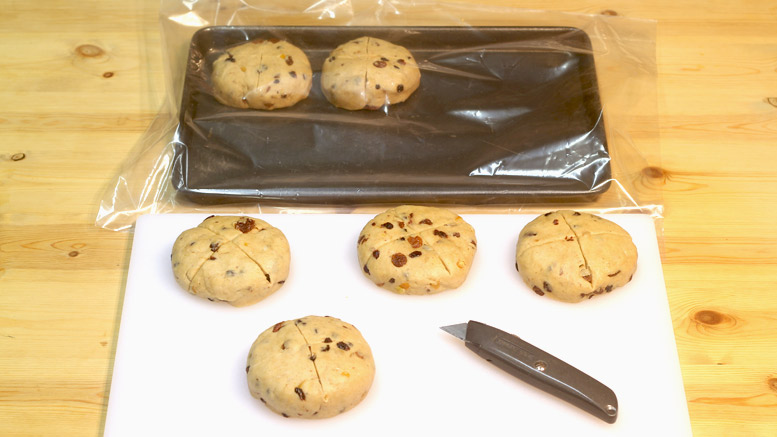 Preheat the oven to 220C

In a small mixing bowl add the flour and melted butter, sprinkle in the sugar and beat in the milk until a smooth moist, sweet-white pastry is formed, which can be piped easily through a small piping bag.

When the buns have risen, remove the polythene bag. Spoon the flour mixture into a piping bag and pipe a cross on each bun into the cross indentation left by the shallow cut which will have widened as the buns rise in a warm place. Smooth down the pastry cross with a finger, working it into the cut, then pipe across some more pastry for a second time.

Transfer the buns on the baking tray to the oven and bake for 10 to 20 minutes, or until pale golden-brown. As soon as you remove the Hot Cross Buns from the oven, brush them with 3 tbsp of warm runny golden syrup mixed with 1 tbsp of hot water, then set aside to cool on a wire rack. Serve with home-made butter. 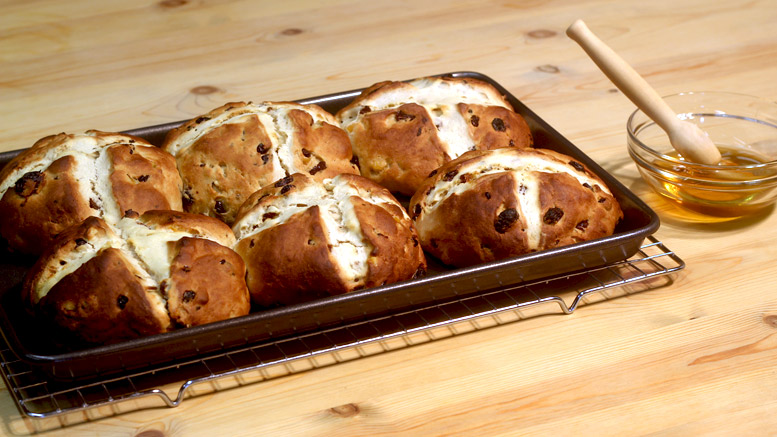