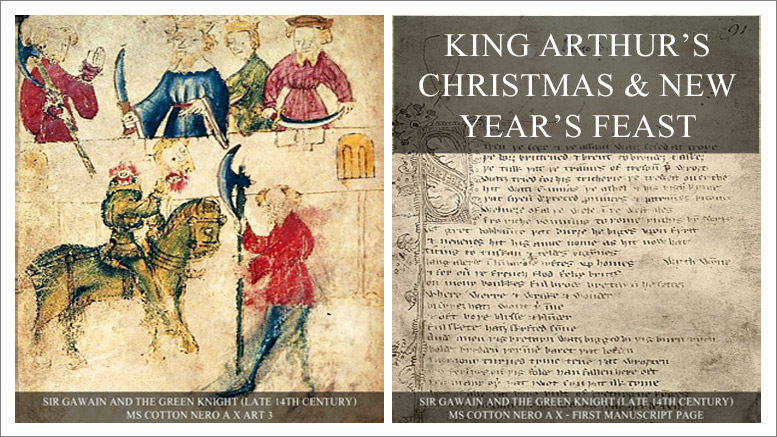 This is a medieval Christmas and New Year’s feast based on one of the greatest works of literature in the English language, the poem “Sir Gawain and the Green Knight”, written in a ‘northern’ Middle-English dialect by the ‘Gawain (or Pearl) Poet’ in late 14th Century England (circa 1390 A.D.).

At this point perhaps a bit of explanation is required. King Arthur (if he existed) was probably a Dark-Age Warlord in the 6th Century (circa 570 A.D.) fighting the advance of the Anglo-Saxon conquest and expansionism into Celtic Briton. This was a patchwork Pagan / Early Christian land which covered much of England and Wales. So why are we looking at creating a Medieval feast for him and not a Dark-Age one?

Firstly this is a fictional feast, where the team at RecipeWISE look at recreating foods from, (or foods inspired by) great works of literature; and the poem ‘Gawain and the Green Knight’ is one of the most important surviving medieval poems. The poet also wrote many key descriptions in the poem as if Arthur were a medieval King, as many of the Medieval Romance novels and poems inspired by King Arthur also did, (which is why many modern Arthurian film and T.V. imagery also borrow extensively from this period rather than the Dark-Ages). The second reason is that recipes only started to be written down after the Dark-Ages, (when Britain and Ireland moved from an oral, to a written tradition) from ‘The Forme of Cury’ 1390 A.D. onwards, and to make an authentic, (albeit fictional) feast, having period recipes to work from is important.

Setting The Scene – A Medieval Feat

In order to fully set the scene, and to understand the dynamics of a medieval feast, you should first read Medieval Feasting Etiquette an article written as a way of introduction to feasting in this period. It serves to give advice for those wishing to re-create a Medieval feast and prepare some of the authentic dishes for themselves. Further to this we also need to read the part of the poem which deals with the Christmas and New Year feast …

Sir Gawain and the Green Knight: In the poem the story begins in Camelot at Christmas-tide as King Arthur’s court is exchanging gifts and waiting for the festive feasting to begin. The king (as is his custom on high feast days) delays the start of the feast until he sees or hears of an exciting adventure. At this point a gigantic and mysterious warrior, a figure entirely dressed in green, and riding a green horse, (the ‘Green Knight’ of the story) rides unexpectedly into the hall, startling all before him. Unusually for a knight he wears no armour, but bears an axe in one hand and a holly bough (a symbol of peace) in the other.

From his clothes and hair, to his beard and skin, he is coloured green, save for his red eyes – more supernatural creature than man. The Green Knight offers to allow anyone to strike him with his axe if the challenger will take a return blow in a year and a day. At this Sir Gawain accepts the challenge of the Green Knight, stopping his uncle (Arthur) from rashly accepting a seemingly dangerous pact. Gawain beheads the Green Knight in one blow, only to have the Green Knight stand up, pick up his head, and remind Gawain to meet him at the appointed time, a year on. After the Green Knight leaves, and to distract everyone from Gawain’s fate, Arthur calls for the feast to begin …

“King Arthur lay at Camelot upon a Christmas-tide, with many a gallant lord and lovely lady … then they brought the first course, with the blast of trumpets and the waving of banners, with the sound of drums and pipes, so that many a heart was uplifted at the melody. Costly and most delicious foods were carried in. Many were the dainties, delicacies and fresh meats, so great was the plenty they might scarce find room on the board and table-cloth to set all the silver dishes. Each helped himself as he liked best, and for each of two guests were twelve dishes served, with a great plenty of beer and bright wine.” Sir Gawain And The Green Knight, (approximately 1390 A.D.).

Other important references to food and dining in the poem, from a translation:

“a clear living light from waxen candles awakened the walls … food was carried around as custom decrees and served to each person as their status deserved … with several soups all seasoned to taste … and a feast of fish, some baked in bread, some browned over flames, some boiled or steamed, some stewed in spices and subtle sauces … specially spiced cakes were asked for … they drank and danced all day and the next and danced and drank the day after that, the St John’s Day passed with gentler joy as the Christmas feasting came to a close … when supper’s meal is made they dine on dainty food … song after song, at supper and beyond.

Even though the poet only briefly describes the dishes from the first course of the Christmas-tide Feast we can get a feeling for what should be served and the theatricality of it – (the recipes should also taste good to the modern diner) – a menu containg roast meats and many ‘dainties’ and delicacies as described by the Gawain Poet. A Medieval Feast in 1457 given by Gaston IV, compte de Foix, at Tours in 1457 will help us enormously in this.

We can also look at the written account of an English royal medieval feast given to King Richard II in 1387. This gives us an authentic menu (and factual details of the ingredients served) for a Royal Banquet roughly at the same time the Gawain Poet was writing – and like many writers the Gawain Poet borrowed extensively from his own reality (‘real life’). However, in terms of comparison to the feast given to King Richard II, our fictional menu is more balanced and less dependant on roasted meats, and includes the requisite ‘dainties’, with a similar feeling in presentation to Gaston IVs 1457 banquet.

The Menu and Recipes for King Arthur’s Medieval Christmas and New Year’s Feast (based on the medieval poem Sir Gawain and the Green Knight) follow on the next page.