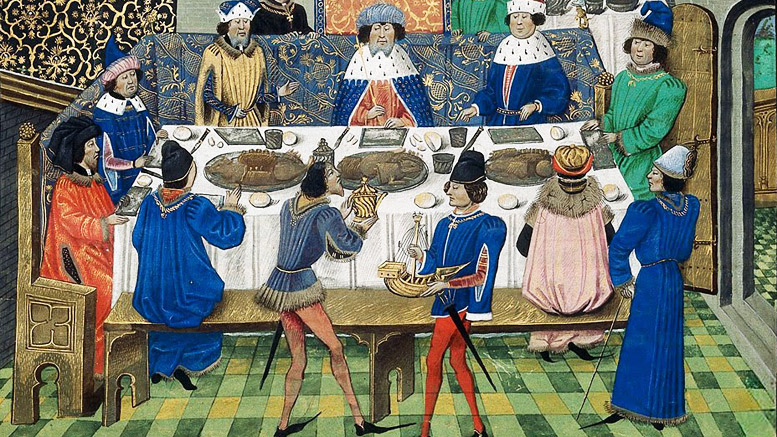 On September 1387 A.D. one of the most extravagant of the early Medieval English feasts was recorded. It was held in honour of King Richard the Second (Richard II) and the Duke of Lancaster (John of Gaunt). The list of food is staggering to a modern day audience, as is the number of dishes served in each of the three courses. However it does give us a very clear indication (and factual evidence) of what was made and eaten in a royal feast held for hundreds of guests, spread over three chambers. It was made and presented at the home of the Bishop of Durham in London and the solemnity and atmosphere of such an occasion would have been very serious. During the Medieval feast each of the three courses would have been served to a set of rules and etiquette, with the roasted birds and subtleties made to look fit for a king: the article Medieval Feasting Etiquette explains more about subtleties and the rules of the feast. To make many of the recipes listed see our Online Library for Medieval Recipe Manuscripts.

RICHARD II, King of England, younger son of Edward the Black Prince, (by Joan ‘the Fair Maid of Kent’) was born at Bordeaux on the 6th of January 1367. He was brought to England in 1371, and after his father’s death he was, on the petition of the Commons in parliament, created Prince of Wales on the 10th of November 1376. When his elder brother Edward III died, on the 21st of June 1377, Richard became king. Yet in 1399 he was overthrown on a visit to Ireland, when Henry Bolingbroke landed at Ravenspur. Henry found only half-hearted opposition to his insurrection, and when Richard himself returned from Ireland it was too late. Ultimately Richard had to surrender to Henry, and this occurred at Flint on the 19th of August, with Richard promising to abdicate if his life was spared. He was taken to London riding behind his rival with indignity.

Not long after, in February 1400, he died, perhaps of the rigour of his winter imprisonment, rather than by murder, as alleged in the story adopted by Shakespeare. However, at the time the mystery of Richard’s death even led to rumours that he had escaped, and a supposed impostor pretending to be Richard lived during many years under the protection of the Scottish government.

The 3 Courses are pretty straight forward, pottages and roast meats with pastry custards etc. what is not mentioned, unfortunately are what the Subtleties are … a Subtlety (or indeed an entremet), is a dish that is surprising in some way, the way it looks or the ingredients used in it – it is never as it seems – something to bring a wonderful spectacle to your guests. Records of other feasts mention what these spectacular things were, the Feast Of 1547 was truly wondrous, however, these spectacles were probably to do with heraldry and others Christianity, it being a feast thrown by the Bishop of Durham for the King of England, Richard II.

To make many of the recipes listed below see our Online Library for Medieval Recipe Manuscripts.

What is most noticeable about this feast is how many Roast Birds there are and the variety of them.