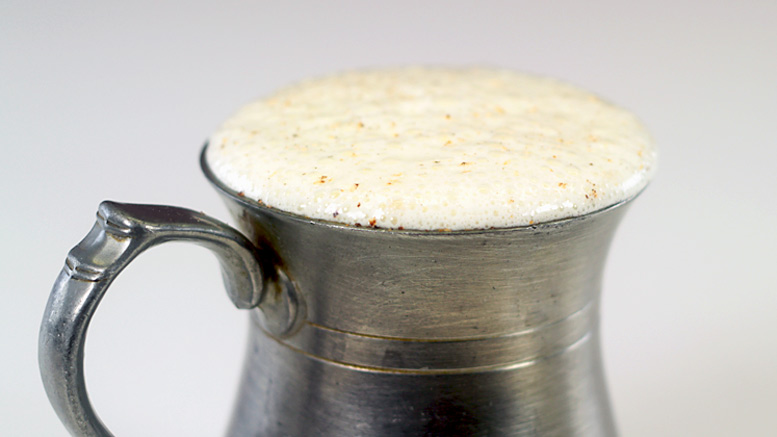 This Lambswool, (or Lamb’s Wool) is one of the traditional drinks of the ‘Wassail’, (or Apple Howling) it is either so called after the light colour and frothy appearance of the drink on the surface, or, as Richard Cook in 1835 believes, it stems from being served at the ancient Celtic pagan festival of La mas ubal, that is, ‘The Day of the Apple Fruit’; and being pronounced lamasool, it was corrupted to Lambs Wool. The drink is made with a sweet-spiced hot ale (or cider) and roasted apples.

To fully understand the traditions of the wassail in summary we can look at Samuel Johnson’s Dictionary, published in 1756, which says the ‘Wassail’ was: “a liquor made of apples, sugar, and ale; a drunken bout; a merry song”. Yet the word wassail derives from the much older, ‘Old English’ (Anglo-Saxon) words wæs (þu) hæl which means ‘be healthy’ or ‘be whole’ – both of which meanings survive in the modern English phrase to be, ‘hale and hearty’ – while the first written reference to wassailing dates back to a medieval 1486-93 AD record, for wassail payments made at the New Year, at St Mary De Pre Priory (in St Albans).

This traditional and authentic recipe given below is taken from a 1633 source and a poem first published in 1648 (see the end of the recipe). The poem by Robert Herrick entitled, ‘Twelfe-Night’, or ‘King and Queene’ describes several practices seen at 12th Night. Other recipes for Lambswool Wassel, or Wassail, printed around this time are also very similar – see the next page for some more original lambswool recipes and some information on the practice of wassailing. However it should be noted that this very simple Lambswool ale recipe will probably have pre-dated this time period (1600s) considerably, perhaps going back to the pagan Anglo-Saxons and Celts, with honey replacing the sugar.

Next crown a bowl full
With gentle lamb’s wool :
Add sugar, nutmeg, and ginger,
With store of ale too ;
And thus ye must do
To make the wassail a swinger.

Note: Depending on your area and its traditions use either ale or cider in the recipe below – however, it is thought that ale recipes are considered to be older than cider ones. And although Richard Cook in 1835 (see end of recipe) puts his sugar and spices in with the apple pulp, we will be following the earlier (traditional) advice of Herrick in 1648 among others, and put the spices in the ale to mull first and the apple pulp in later. 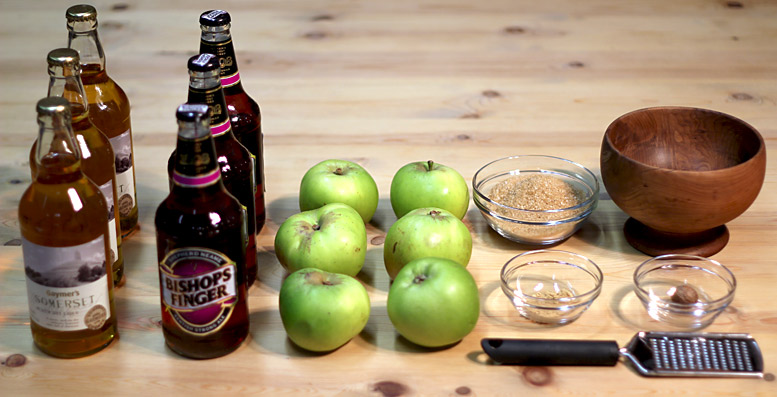 Prepare the apples in advance: time it so they are ready when you want to put them into the lambswool to serve.

Core the 6 apples fully, getting rid of the pips. Lightly grease the baking tray. Place the apples on the baking tray about 6cm (2 inches) apart – they will swell up a little. Bake the apples at 120C for about an hour or so – so they become soft and pulpy and the skins are easy to peel away. 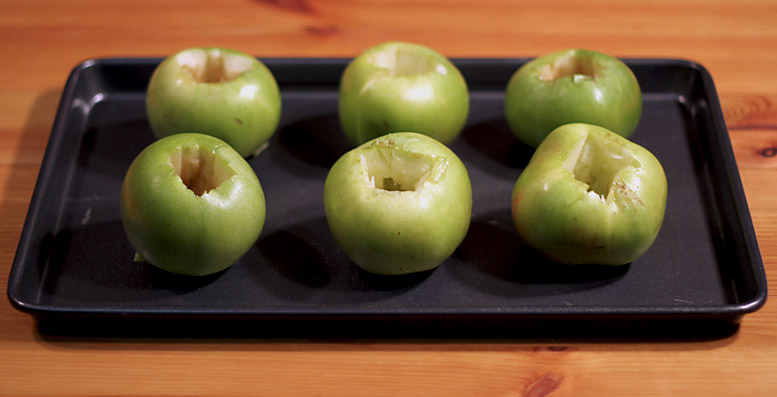 Coring And Baking The Apples For The Lambswool Wassail Drink

In a large thick bottomed saucepan (which is quite tall to avoid splashes when whisking) add the sugar. Cover the sugar in a small amount of the ale (or cider) and heat gently. Stir continuously until the sugar has dissolved. Then add in the ground ginger and grate in the whole of the nutmeg. Stir, and keeping the pan on a gentle simmer, slowly add in all the rest of the ale (or cider). Leave for 10 minutes on a gentle heat as you deal with the apples. 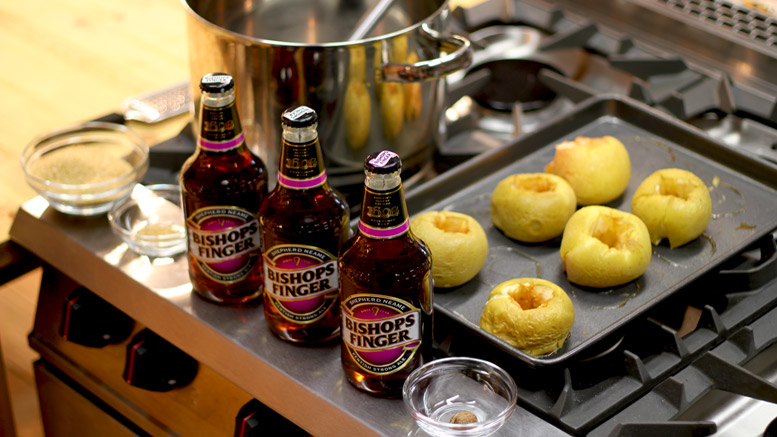 Spicing And Warming The Ale For The Lambswool Wassail Drink

Take the baked apples out of the oven to cool slightly for 10 minutes – they should now be soft and pulpy.

Break open the apples and scoop out the baked flesh into a bowl, discarding the skin. Then take a fork and mash this apple pulp up, while it is still warm, into a smooth purée with no lumps. Add the apple purée into the ale (or cider) lambswool, mixing it in with a whisk. 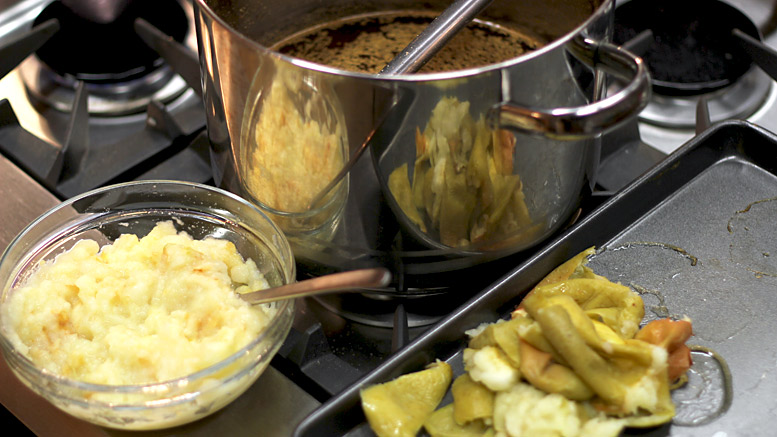 Mashing The Baked Apple Flesh For The Lambswool

Let the saucepan continue to warm everything through for thirty minutes, on a very gentle heat, until ready to drink. When warmed through use the whisk again for a couple of minutes (or use a stick blender) to briskly and vigorously froth the drink up and mix everything together. The apple and light froth will float to the surface, and depending on how much you have whisked it, the more it looks like lamb’s wool. Note: to traditionally froth drinks up they were normally poured continuously between two large serving jugs to get air into the drink.

Ladle the hot Lambswool into heat-proof mugs or glasses and grate over some nutmeg, or pour the drink into a communal bowl (with several thick pieces of toast in the bottom) to pass around if wassailing. See the next page for some more original lambswool recipes and some information on the practice of wassailing.