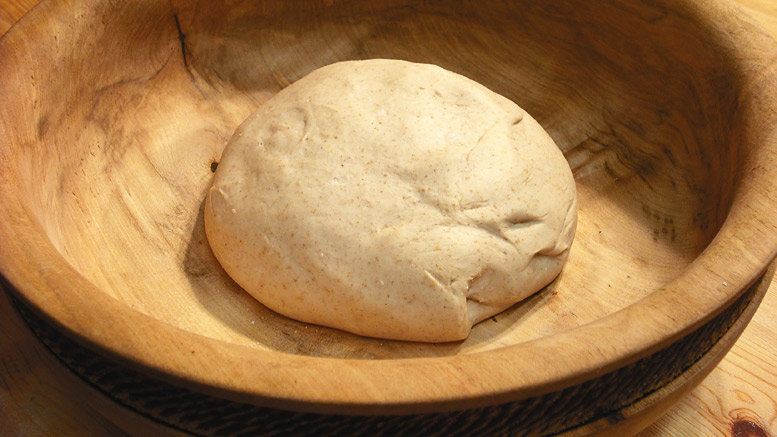 Making The Manchet Dough In A Wooden Bowl

Medieval Bread Yeast: Manchet Bread, unlike Maslin Bread, would not use a Sourdough Starter, it was considered too common, (the added sour taste ‘spoiled’ the bread) a brewer’s yeast (or barm) was used instead. A brewer’s yeast was the yeast carefully skimmed off the top of fermenting ale, after about its second day in the vat. With sugar and water added it could be kept for up to a week in a jar, and it was sold by the Brewer’s wife. Later on Manchet Bread would sometimes be sweetened by bakers using the addition of ingredients such as rose water, nutmeg and cinnamon.

Note On Baking and The Shape Of The Bread: Purchasing bread baked in tins of uniform shape and capacity is a relatively late development in culinary history – although it does seem to have been a British invention, certainly they were in use by the 1700’s, if not before. Therefore an authentic Medieval bread would have been round and domed shaped with a flat bottom, (from having been allowed to rise before baking) and be baked on a bakestone or the flat floor of a bread oven without it being in a tin – each loaf would have commonly been made by using around 4lb of flour (1.9kg). The recipe below is just over a third of that, triple everything in the ingredients if you want to make the loaf the same authentic size.

Note On The Flour: The best flour to use in this Manchet Bread recipe is a traditional stoneground flour, rather than a modern roller milled flour, (stoneground bread flour is now quite common to purchase). In Britain you can also still purchase flour produced by traditional local artisan millers who still operate surviving wind and water mills and produce an ‘80%’ extraction stoneground white flour, which is perfect for this bread.

If this cannot be purchased use some stoneground white bread flour mixed in with some wholemeal flour, which has had the largest bran particles sieved out – in essence we need to add wholemeal back in to the modern finer white bread flour, (to make an 80% extraction rate flour) but not the largest bran particles which would have been boulted out even in the Medieval period – see an article on Medieval And Tudor Flour.

The earliest Manchet recipe below from 1588 shows techniques which are a little bit more involved, but this is a household recipe, rather than a Baker’s Guild recipe, a guild recipe is a simpler bread making technique, which has varied very little through the centuries.

The Making of Manchets after my Ladie Graies

Take two peckes of fine flower, which must be twice boulted, if you will have your manchet verie faire: Then lay it in a place where ye doe use to lay your dowe for your bread, and make a litle hole in it, and put in that water as much leaven as a crab, or a pretie big apple, and as much white salt as will into an Egshell, and all to breake your leven in the water, and put into your flower halfe a pinte of good Ale yest, and so stir this liquor among a litle of your flower, so that ye must make it but thin at the first meeting, and then cover it with flower, and if it be in the winter, ye must keepe it verie warm, and in summer it shall not need so much heate, for in the Winter it will not rise without warmeth.

Thus let it lie two howers and a halfe: then at the second opening take more liquor as ye thinke will serve to wet al the flower. Then put in a pinte and a halfe of good yest, and so all to breake it in short peeces, after yee have well laboured it, and wrought it five or sixe tymes, so that yee bee sure it is throughlie mingled together, so continue labouring it, till it come to a smoothe paste, and be well ware at the second opening that yee put not in too much liquor sodenlie, for then it wil run, and if ye take a litle it will be stiffe, and after the second working it must lie a good quarter of an hower, and keep it warme: then take it up to the moulding board, and with as much speede as is possible to be made, mould it up, and set it into the Oven, of one pecke of flower ye may make ten caste of Manchets faire and good.