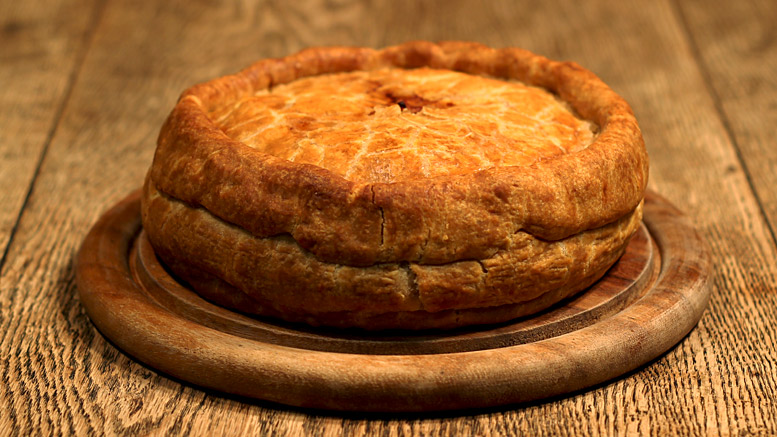 Melton in Mowbray is a small market town located in north Leicester, central England; an area also famous for its Stilton Cheese. Although made earlier in the local rural farms in Mowbray the first of these now famous pies started to appear commercially in the 1830’s and have been on sale ever since. Under European Law only pies made within a designated zone around Melton, and using uncured pork, are allowed to carry the Melton Mowbray name on their packaging, (if sold commercially).

The most traditional, and the best Pork Pies sold in Melton are still the hand-made and hand-raised ones, as given in the Victorian recipe below. The pie pastry, when freshly made (unlike a long-life shop bought pie) is fantastic, crispy on the outside and soft and yielding on the inside, from being soaked in the stock. A stock (to form the clear jelly) is always added to the hand-cut pork pie filling after baking, it is added because the meat expands during cooking and shrinks on cooling, leaving a gap under the pie lid.

From ‘Country Dishes’, by Barbara Hargreves (Ed.) published in 1962

This recipe comes from a collection of local and regional recipes handed down within families who lived and worked in Leicestershire, many dating from the 1800s

The Crust. Put lard and water in saucepan and bring to the boil to melt the lard. Meanwhile weigh and sieve flour and salt, then pour lard and water (while still boiling) over the flour and mix well. Knead well by hand. Leave to cool about and hour but during this time knead once or twice. The dough must not get really cold otherwise it will crack and crumble. Turn onto floured board. Flour mould (the traditional Leicestershire pie mould is wooden, but a 2 lb jam-jar will do), put crust on top of mould and shape it from the top some way down the sides. The crust should be about 1/3 inch (1cm) thick. Leave to set for 20 minutes, then turn crust of mould and trim with scissors.

The Filling. Mince the meat on coarse knife of mincer or chop finely with a knife; add salt and pepper and mix in, add water and mix again. Press meat well into corners of pie, filling within 3/4 inch (2cm) of the top. Make the lid out of the pastry trimmings, press the edges together. Cut round to neaten off – this cutting also helps to bind the top and sides together. Castellate the top with thumb and first finger, make one hole with a skewer and decorate with stars or leaves.

Cut a length of greaseproof paper about 1 inch (2.5cm) higher than the pie, wind it round the pie making sure it goes right down the bottom, and stick it together with flour paste. This holds the pie in position. The pie need not be baked on the same day – in fact it is improved by standing overnight.

To cook, put the pie on a sandwich tin with 1 inch (2.5cm) edges – allowing plenty of room around the pie – and place on baking tray. Cook at 350 degrees F (180C) for the first hour, then turn oven to 300 degrees F (160C) and give pie another 45 minutes. The sandwich tin will re-absorb the fat. When the pie is nearly cold make a small hole in the top and add jelly. The jelly is made from bones and rind, just covered with water, simmered for 2 hours, then strained and seasoned. It should be poured into pie 1 hour after it comes out of oven.