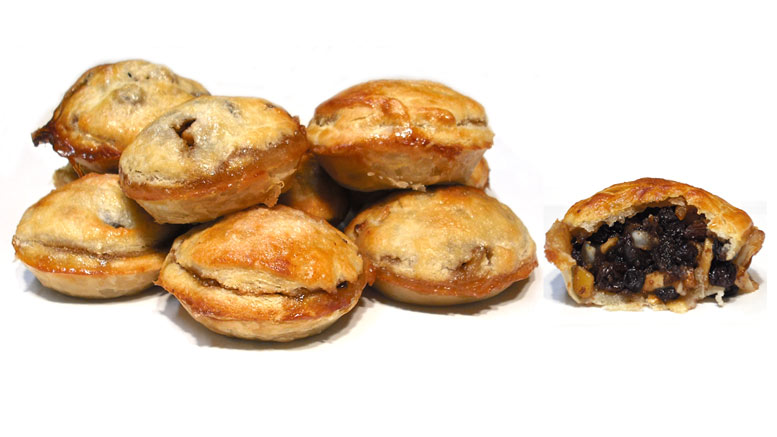 This Victorian mince-pie recipe (1861) from Mrs Beeton calls for minced beef to be added to the mincemeat, which was a common ingredient in Mince Pies before the 1900s. Although, throughout the Medieval and Tudor period the favourite meat used in mince pies was lamb and veal; by the 1700’s it became tongue, or sometimes tripe, while in the nineteenth century minced beef became the norm; it was only towards the end of the Victorian period, and into the 20th Century, that mincemeat for mince pies became meat free and an all fruit filling, (with only the suet remaining). Mincemeat Masterclass.

Making Notes: I made this recipe using fresh beef suet bought from my butcher, you can of course replace this with packet bought beef suet. If using real beef suet make sure it is cut up very small, (shredded) or even grated. Unlike packet suet sometimes the larger pieces of fresh suet can cook and stay like a little ball of jelly, rather than melting completely down.

Tasting notes: These are very good, but they certainly do not taste like a modern ‘fruit only’ mince pie. It is hard to describe but they have a tang, not quite ‘meaty’ but certainly savoury. And unlike a short-crust pastry the puff-pastry soaks up the juices, making them not quite soggy, but neither is the pastry crisp. If you are after making an unusual, but tasty and traditional mince pie from history, then this recipe certainly fulfils that criteria.

Makes 12 Pies – Tip: make the mincemeat up at least 1 to 2 weeks in advance to let it mature – store in the fridge.

For the pastry in the pies:

For the mincemeat recipe: makes enough for about 36 mince pies.

To make the mincemeat:

See this post for more details on making the mincemeat: Mincemeat 1861. If you are using fresh suet, chop up finely and shred. Combine all the ingredients (except the brandy) in a large non-metallic mixing bowl and mix thoroughly. Make sure everything is cut up small and then evenly mixed in, and the lean beef mince is small and broken up. Pour over the brandy and give another good stir. Cover the bowl and leave overnight in the fridge.

The next day sterilise one or two air tight preserving jars. Preheat the oven to 110°C. Wash the jars and lids well in hot clean water and place on a baking tray (do not put any plastic or rubber seals in the oven). Put the jars and lids in the hot oven for 10 minutes. After leaving the jars to cool, divide the mincemeat between the jars, seal and label. You can store the mincemeat in a sterilised jar in the fridge for up to two weeks.

To make the mince pies:

Divide the puff pastry into 2 unequal pieces, about two-thirds to one-third (500g will just about give you enough for 12 pies, if you roll the pastry out thin). On a lightly floured surface, roll out the large piece of pastry to about 3mm thick. Using a 10cm round, plain cutter (or ramekin), stamp or cut out 12 circles, re-rolling the trimmings, if necessary. Carefully mould into a deep pie tin – don’t worry if the pastry bunches together slightly, simply smooth out with your fingers. Divide the mincemeat between the pastry cases, filling each one three-quarters full.

Roll out the smaller piece of pastry as before on a floured work surface and use an 8cm round, plain cutter to stamp out 12 lids. Brush the edges of the pastry bases with milk, lay a pastry lid on top and press the edges together to seal. Brush each mince pie with a little beaten egg white and sprinkle over some powdered icing sugar. Bake in the oven for 25 minutes at 190C or until golden and piping hot. Cool in the tin for 5 minutes, then carefully transfer to a wire rack.

From ‘Household Management’ by Mrs. Beeton, published in 1861

Mode.—Make some good puff-paste by recipe No. 1205; roll it out to the thickness of about 1/4 inch, and line some good-sized pattypans with it; fill them with mincemeat, cover with the paste, and cut it off all round close to the edge of the tin. Put the pies into a brisk oven, to draw the paste up, and bake for 25 minutes, or longer, should the pies be very large; brush them over with the white of an egg, beaten with the blade of a knife to a stiff froth; sprinkle over pounded sugar, and put them into the oven for a minute or two, to dry the egg; dish the pies on a white d’oyley, and serve hot. They may be merely sprinkled with pounded sugar instead of being glazed, when that mode is preferred. To re-warm them, put the pies on the pattypans, and let them remain in the oven for 10 minutes or 1/4 hour, and they will be almost as good as if freshly made.

Mode.—Stone and cut the raisins once or twice across, but do not chop them; wash, dry, and pick the currants free from stalks and grit, and mince the beef and suet, taking care that the latter is chopped very fine; slice the citron and candied peel, grate the nutmeg, and pare, core, and mince the apples; mince the lemon-peel, strain the juice, and when all the ingredients are thus prepared, mix them well together, adding the brandy when the other things are well blended; press the whole into a jar, carefully exclude the air, and the mincemeat will be ready for use in a fortnight.