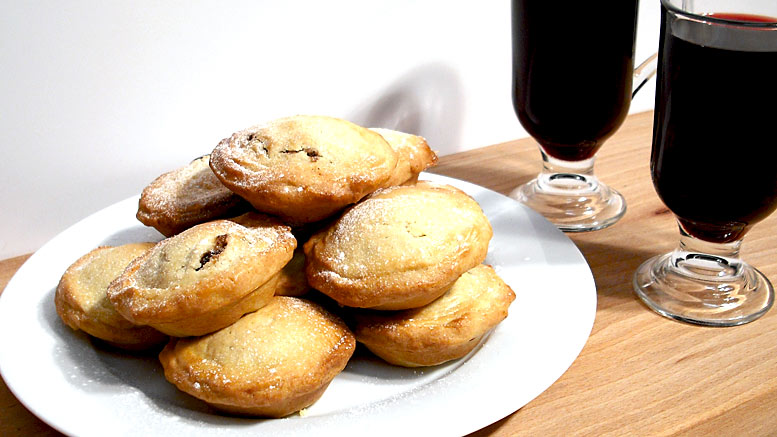 Even though the basic building blocks of the ingredients in these mince pies are the same as for traditional ones, these Chocolate Mince Pies are very unlike a traditional mince pie (Mincemeat Masterclass). These chocolate mince pies contain mature silky flavours with a slight bitterness from the dark chocolate; and this complements very well with the sweeter dried fruits added in to the mix. One of the benefits of this recipe is that the chocolate mincemeat recipe can be made up to three or four months in advance – which allows the mixture to mature, letting some flavours mellow and mingle, others intensify – however it  can also be made up successfully within just a few days of Christmas if you want an excellent last minute recipe.

To Dust the Pies

Making the Mince Meat: See this post for more details on making the Chocolate Mincemeat. Chop up everything that needs to be chopped up to the same small size. Then, in a large, non-metallic mixing bowl, add everything in, stir thoroughly, then cover with a clean cloth or cling film and leave overnight somewhere cool. The next day stir thoroughly once more and spoon into sterilized jars and seal. Place the jars somewhere cool and dark and use within 3 months.

Add the sieved flour and ground almonds into a large mixing bowl. Add in the softened diced butter and rub it together with your finger tips and thumbs until the flour looks like very fine breadcrumbs – it takes a few minutes to get the fat rubbed in well.

Sprinkle in the sugar and add in the lemon zest, egg yolk and milk and mix with a wooden spoon until the mixture starts to clump together. Tip the mixture onto a board and gently squeeze the pastry in your hands and fingers until it comes together into a soft, silky and pliable ball – add a little extra milk if it feels dry, but be careful not to add in too much extra moisture. Wrap the pastry in cling film and chill in the fridge for 30 minutes.

Roll the mince pie pastry on a lightly floured surface to about 3mm and using a 7cm fluted pastry cutter, cut out 24 discs and line two 12-hole small pie tins with them. Use a smaller 6cm fluted cutter to cut 24 discs for the lids or pie tops.

Spoon 2 tsp of mincemeat (made earlier) into each tart, dampen the edge of the pastry bottom with milk and sit a smaller pastry disc on top, crimp with your fingers or a fork to seal. Brush the tops with a little milk.

Bake for 15 to 20 minutes at 190C until golden brown, remove from the oven and cool on a wire rack. Finish with a dusting of icing sugar over the top.