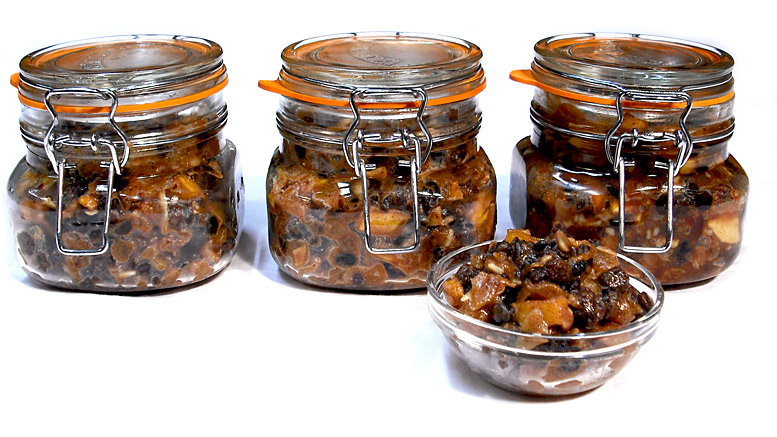 This is probably now considered the most classic and traditional of all mincemeat’s for Mince Pies – apple, dried fruit, suet, candied peel, lemon and orange zest/juice and brandy. It is very similar to the Victorian Mince Pies, but it is made without meat, (although remember, by using beef suet, it is not vegetarian, use a vegetable suet replacement). This mincemeat rewards being aged for a minimum of 4 weeks.

The main difference to almost all other recipes you see anywhere else is in how we will prepare this mincemeat for ageing and storage; this method will minimise the chance of fermentation of the apple and fruit juices tainting and spoiling the ageing process. And because we can age this mincemeat for over 6 months, it is actually one of the best tasting mincemeat’s you can make.

The key is to gently melt the suet (and stew the apple) before storing, so that the preserving fat, fruit juices and alcohol bind on all the ingredients when cooling, sealing them with all the flavours taken up by the melted fat. If you have time to make this in advance then this will beat any other recipe (or expensive shop-bought mincemeat) hands down, because of how it is aged; deepening and mingling all of the flavours to a juicy-fruity-boozy intensity. If you want to give this mincemeat a name … call it old faithful. If you are making this up, with only a week or so to age, reduce the amount of alcohol.

Wash all the dried fruit under running water in a colander and leave to dry. Peel, core and chop the apple small. Then, in a large mixing bowl (oven proof at low temperatures) combine all the ingredients, except for the brandy, stirring them in so that no one ingredient is clumping together. (Tip: get the most lemon and orange zest and juice out of the fruit as possible). Then cover the bowl with a clean cloth and leave the mixture in a cool place overnight, so the flavours have a chance to initially mingle, deepen and develop.

The next day pre-heat the oven to a low temperature of 120°C.

Cover the mixing bowl loosely with foil and place it in the oven for 3 hours, then remove the bowl from the oven. The suet will have melted and the apple will have stewed and macerated, leaving the mincemeat covered in a thin, watery fat. This is fine, and exactly what we want; with this method of preparing the mincemeat the melted fat (with the added alcohol) will stop any fermentation during storage (making this recipe fine to store for over 12 months).

After removing from the oven, and as it cools, stir the mixture from time to time; instead of the suet being in tiny shreds (from packet suet or shredded from fresh suet) it will have melted from being in the oven, and so by stirring it in, the fat will coat all the dried fruit and fresh apple as it cools .

When the mincemeat is cold, stir again, adding in the brandy. Leave this covered with a clean cloth overnight, the next day stir for a final time and then pack the mincemeat in jars which have been sterilised, ready to be used in Mince Pies when needed. When filled right to the top (with very little air space left, or air pockets in the mincemeat) seal the jars and store in a cool, dark, dry place like a store cupboard or pantry. Age for at least 4 weeks to 6 months, (can be left longer).