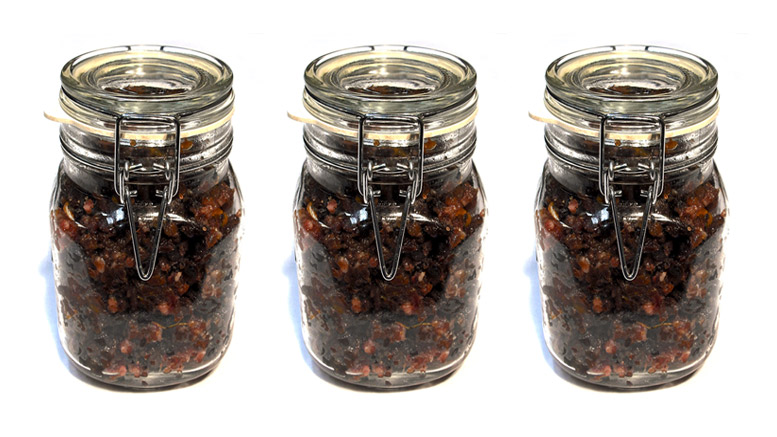 This recipe is from one of the oldest recorded recipes for actual ‘Mince Pies‘, (minst pyes) the recipe was thought to have found its way into a file of state papers created by Edward Conway, secretary of state to King Charles I in 1624 AD, just before the English Civil War.

Archivists discovered this recipe tucked away in the official papers of King Charles I with the title, ‘For six Minst Pyes of an Indifferent Bigness‘. And I personally don’t think there can be any better description for mince pies than pies of an indifferent bigness, do you?

In terms of storing and ageing this is a recipe without alcohol to help preserve it, and it does include fresh minced meat, so this mincemeat is best made up only 3 days before you need to use it, and then once mixed it should be stored in the fridge and used within those 3 days.

If you are wondering, there is a very clean taste about these mince pies; the meat and fruit (together with the spices) are excellent, and are also lifted and enhanced by the citrus zest and juice. These should certainly be made for winter, Christmas and 12th Night.

For the Paist mingle 1 pound and a halfe of Suger w(i)th the Flower and breake in the Yolkes of six Eggs, then worke it together w(i)th 3 parts of the two pounde of Butt(e)r. Set of a little water, and let it Seethe, then scym it, put in the 4th Parte of the Butt(e)r, when it is melted, Scym it cleane from the Water, work it w(i)th the Paist.

For the Meate. Let it be seasoned w(i)th Pepper, and mingled with halfe a pounde of Suger, the other Frute and Spyce, the Raisons must be stoned, & someof them minced among the meate, the others put in hole, put in the Joyce of two Orringes and one Leamond, and the Ryne of them smale minced.

When the Pyes are filled slice Dates and stick in the top, when you sett them into the oven. Wassh them over w(i)th the yolkes of Eggs, and pynn them upp in Papers.

Note: The abbreviation lb for pound is derived from ‘libra’ which was a Roman unit of weight, equal to about 320g.

The weight of the ingredients listed below are reduced and converted from the original recipe to modern weights.

This method is pretty simple. Chop up half the raisins small (minced) and then thoroughly mix everything in a large, non-metallic mixing bowl, (add the spices in last) so no one ingredient is clumping together. Cover the bowl with cling film and place in a fridge for the flavours to develop overnight. Use the next day, or stir once a day and use within three days of making.