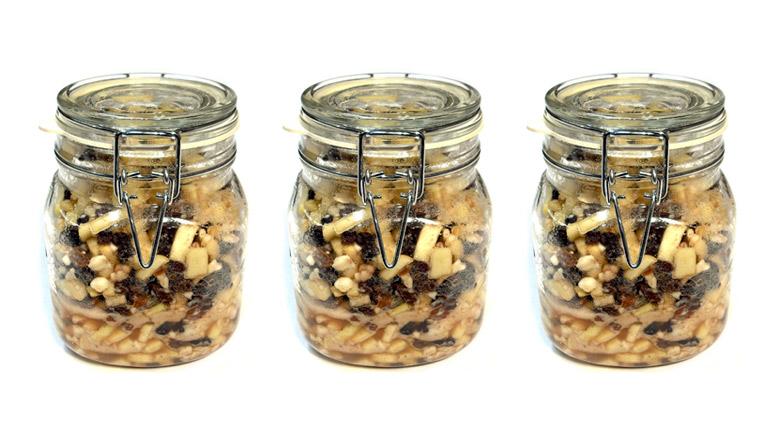 In the 1700’s mince pies were still made with meat, but this recipe from Hannah Glasse in 1740 gives us a very modern instruction – to make a mincemeat from dried fruits and suet, to be stored for 4 months (to mature in brandy and wine).

This mincemeat was then added, after maturing, to pastry cases in layers, with a little minced neat’s tongue or boiled beef, (with meat only added, “if you chuse”) and with orange and citron peel cut thin. She even calls the fruit preserve ‘mince-meat’ as in reference to sweet meats. So here we are going to make her fruit only ‘mince-meat’ recipe from 1740.

Note on storage: Although Hannah Glasse says this recipe will keep for 4 months, I would not recommend storing this recipe past two months; the very large amount of fresh apple in the recipe means that it could easily start to ferment if the brandy and wine do not preserve it enough.

To make mince-pies the best way.

Take three pounds of suet shred very fine, and chopped as small as possible; two pounds of raisins stoned, and chopped as fine as possible; two pounds of currants nicely picked, washed, rubbed, and dried at the fire; half a hundred of fine pipins, pared, cored and chopped small; half a pound of sugar pounded fine; a quater an ounce, of mace, a quarter of an ounce of cloves, two large nutmegs, all beat fine; put all together into a great pan, and mix it well together with half a pint of brandy, and half a pint of sack [wine]; put it down close in a stone pot, and it will keep good for four months …. [instructions continue to make the mince pies]

All the following recipe ingredients have been reduced using the same ratios and converted to modern weights from the original recipe.

If you are using fresh suet from your butcher chop it up very finely or grate it. Then in a large non-metallic mixing bowl add the wine and brandy, suet and dried fruit. To this start adding the peeled and cored apples, chopped very small. Do the apples in small batches and immediately put them into the bowl with the brandy and wine (coating them) to stop them going brown. Mix everything in, stirring thoroughly, and cover with a clean cloth or cling film and leave overnight in the fridge. The next day stir once more and then spoon into sterilized jars and seal. Store in a dark, cool place for up to 2 months. The mincemeat will darken as it ages.