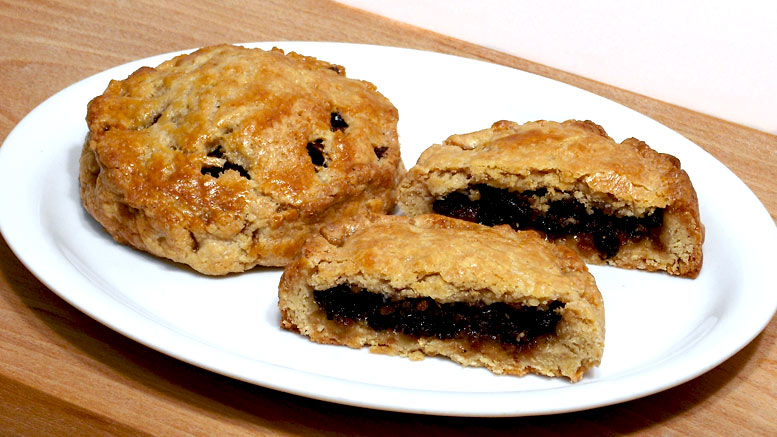 This original Mince Pie recipe from 1624 was thought to have found its way into a file of state papers created by Edward Conway, secretary of state to King Charles I, and it is an excellent example of an authentic late Tudor and early Stuart pie of the 1600s. The recipe is also one of the earliest on record actually calling these small pies ‘mince pies’ (minst pyes) instead of the earlier name used for small pies ‘chewets’ … the recipe is so named: ‘For six Minst Pyes of an Indifferent Bigness‘.

Around the time of this mince pie, (or Mynst Pye) in 1624, an interlocking Fleur-delis shape or Star shape was common for the pie crust, while by the eighteenth-century larger more ornately decorated pies were being made; with a return to the smaller shaped mince pies, made in a pie tin, seen at the end of the nineteenth-century.

Mincemeat, for mince pies, until very recently contained meat; and throughout the Medieval and Tudor period the favourite meat used in mince pies was lamb and veal, by the 1700’s it became tongue, or sometimes tripe, and in the 1800s minced beef became the norm; it was only towards the end of the Victorian period, and into the 20th Century, that minced-pies became all fruit fillings (albeit with suet).

Makes around 24 small Mince Pies in a tin, but 6 pies of an ‘indifferent bigness’ if hand raising them.

Note On The Shape Of The Mince Pie: you can use a small 12 hole pie tin, but if you have the time, and want them authentic, then you can use the method described below to hand-raise the pastry cases without the use of a tin. The mince pie designs and shapes you choose to do can be very ornate and skilled, a typical Star or Fleur-delis shape, but simple round mince pies are fine, as shown by Robert May in 1685.

Make up the mincemeat a day in advance, and get your butcher to do the coarse mincing for you when you order the meat. It is essential that the meat is cooked through before serving – you can check the meat is fully cooked by using a digital thermometer probe pushed into the centre of the pies.

Tasting Notes: What do these mince pies from a 1624 recipe taste like? Actually they taste very good, almost indistinguishable from a traditional (non-meat) mince pie which uses suet. Eaten warm the taste which dominates is the fruit, not the meat – and while the orange and lemon zest is noticeable as a background flavour, the currants and raisins (covered in subtle winter-spices and meat juices) form the main texture of the pie. However, these are very sweet pies, the pastry is very sugary, and there is even more sugar in the mincemeat filling.

What is strange is the ‘smell’ of the pies, we are so used to baking meat pies, or baking fruit pies, (rarely, if ever, smelling a combined fruit and meat pie) that this new (old) smell is actually off putting, particularly when the pies are brought straight out of the oven. Cooler though the smell diminishes and fades, and if you were not told they contained fruit and meat you would consider them very tasty traditional mince pies, which are really enjoyable to eat.

For six Minst Pyes of an Indifferent Bigness

For the Paist mingle 1 pound and a halfe of Suger w(i)th the Flower and breake in the Yolkes of six Eggs, then worke it together w(i)th 3 parts of the two pounde of Butt(e)r. Set of a little water, and let it Seethe, then scym it, put in the 4th Parte of the Butt(e)r, when it is melted, Scym it cleane from the Water, work it w(i)th the Paist.

For the Meate. Let it be seasoned w(i)th Pepper, and mingled with halfe a pounde of Suger, the other Frute and Spyce, the Raisons must be stoned, & someof them minced among the meate, the others put in hole, put in the Joyce of two Orringes and one Leamond, and the Ryne of them smale minced.

When the Pyes are filled slice Dates and stick in the top, when you sett them into the oven. Wassh them over w(i)th the yolkes of Eggs, and pynn them upp in Papers.

Note: The abbreviation lb for pound is derived from ‘libra’ which was a Roman unit of weight, equal to about 320g before standardisation.

These ingredients use the ratios of the original 1624 recipe, reduced in volume to make six pies the size of your hand.

For the mince meat:

On top of the mince pie filling:

For the mincemeat filling: See this post for more detail on making the 1624 Mincemeat Recipe. Chop up half the raisins small (minced) and then thoroughly mix everything in a large mixing bowl, (add the spices in last) so no one ingredient is clumping together. Cover the bowl with cling film and place in a fridge for the flavours to develop overnight. Use the next day or stir once a day and use within three days of making. See this post for more information on how to make the Mincemeat Recipe From 1624.

Make the pastry: sift the flour into a large mixing bowl, mix in the sugar and add the 2 egg yolks. Using a wooden spoon mix in the softened butter. Then add the water in, a little at a time, until you can get the mixture with your fingers to bind into a silky but grainy (because of the sugar) pastry.

Knead and work the pastry between your fingers so the sugar is not too granular in the mix, and everything is fully mixed together – this will take about 5 minutes or more – if it is a little wet add in some more plain flour, if it is a little dry add in a small drop of water. The pastry should not be too wet if you are hand raising the pies.

Cover the pastry over with clingfilm and allow to rest in the fridge for twenty minutes or more.

Lightly flour a work surface. Break the pastry up into 6 large balls of equal size. Each ball of pastry will be a single pie. Take a pastry pall and pinch off 1/3 rd (one-third) for the pie lid and set it aside.

Using the palm of your hand push down on the larger ball of pastry for the base – flatten it into a circle 2 cm thick. Then using your thumbs and fore-fingers go round and pinch and pull up the edges of the fat disc to around 4cm high, flatten the base out with your fingers widening it, so the base of the crust is around 6cm.

A pie base can be in a round or in an oval shape (or more complex) and the walls of the pie can be straight up or in at an angle (these are hand made pies so no two are going to be exactly the same).

There is a balance to hand-raising a pie crust, it is more about a ‘pinching’ technique when working with smaller pies and spinning the base after each pinch. The pastry needs to be flexible enough so that it does not tear easily and stiff enough to hold the shape you are making.

When you are happy with the shape fill the bases with the mincemeat, pack it down so the pies are full, and top off with some chopped medjool dates.

Then using the palm of your hand flatten out the remaining pastry ball you pinched off for the lid. The pie lid needs to be around 1/2 cm thick and wide enough to cover the top of the pie – pinch it between fingers and thumbs so that it gets to the size and thickness you want.

Moisten the edges of the cases with egg wash and seal lid and base together at the top by crimping them together with your fingers and thumbs. Make sure they are sealed well and are without cracks. As you can see in the photo below, as the base is filled with meat, and then the lid and base of the pie are joined and sealed together, the integrity of the pie structure improves and becomes more stable and easy to work and move.

If worried about the pastry splitting in the oven – roll a little baking parchment (cut to size) around each of them to help keep their shape if necessary, tie off with string – although they should be fine at this size without the support.

Egg wash the pies, then bake in the oven for 20 minutes at 200C then turn the oven down to 150C and bake for a further 20 minutes, until golden brown and piping hot. Remove from the oven and then cool in the tin for 5 minutes, then carefully transfer to a wire rack. Eat these Minst Pyes from 1624 warm or cold.

Using a pie tin: Grease 2 x 12 hole pie tins or small muffin tins with a little butter. Roll out the pastry for the mince pies into 3mm thick rectangles on a floured work surface and cut into circles with a pastry cutter – cut one larger circle for the base and one smaller for the top. Place the larger pastry circles into the holes of two ready greased small pie tins, fill the pastry bases with some of the mincemeat and top off with some chopped medjool dates.

Glaze the edges of the pasty circle with egg yolk and place a smaller pastry circle on top, and seal together to form a pie lid. Decorate with a few festive or seasonal pastry shaped decorations. Brush the lids with some beaten egg and place the pie tins in the oven.

Bake for 20 minutes at 200C then turn the oven down to 150C and bake for a further 10 minutes, until golden and piping hot. Remove from the oven and then cool in the tin for 5 minutes, then carefully transfer to a wire rack. Eat these Minst Pyes from 1624 warm or cold.