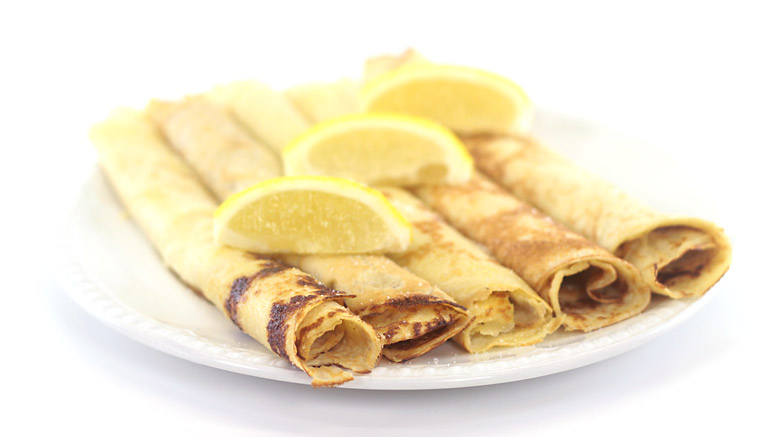 A traditional and classic English pancake is described by Dorothy Hartley in her 1954 book, ‘Food In England’, “abroad pancakes are usually open and piled up together. In England our pancakes are symbols of our insular detachment, for each is rolled up by itself, aloof, with its own small slice of lemon.” This pretty much sums up a traditional English pancake, (although folding them in half, then half again is also a common way of serving them) and the authentic English Pancake recipe below will make this classic Shrove Tuesday treat, which has been made traditionally like this for hundreds of years (for example Hanah Glasse’s 1740 Pancake Recipe, which is similar in many ways to this one, while the oldest known recipe for pancakes written down comes from the Tudor period 1588 Pancake Recipe).

Taylor in 1630 A.D., had this to say about Pancakes. “Then there is a thing called wheaten floure, which the cookes do mingle with water, egges, spice, and other tragical, magicall inchantments; and then they put it, by little and little, into a frying-pan of boiling suet, where it makes a confused dismal! hissing until at last, by the skill of the cooke, it is transformed into the forme of a flip-jack cal’d a pancake, which ominous incantation the ignorant people doe devoure very greedily.”

In terms of regional differences in the UK and Ireland, the English style pancake is almost the exact opposite of the much smaller and thicker Welsh Pancake called a ‘Crempog’ for example. To learn more about the history and techniques of making pancakes read this Pancake Masterclass. Although to quickly answer one of the great questions of the age: to Toss and Flip the pancake or to Turn it Gently? This was actually answered by Hannah Glasse in 1740 “toss it; if you cannot, turn it cleverly”, i.e. do what you want, just do it controlled and with confidence.

Getting Set To Make The Pancakes

Sift the flour and salt into a large mixing bowl and whisk in the eggs one at a time, beating thoroughly until the batter is smooth and free from lumps. Leave stand for half an hour. Just before you want to start making the pancakes stir in the melted butter, and mix thoroughly. A good English pancake batter is quite thin, (it will thicken up a little if left to stand) when you want to use it, it will be about the consistency of single cream.

Use an 8 inch or 20cm non-stick frying pan (or a traditional English griddle) and for each pancake grease it lightly with a little butter – carefully wipe the surface over with a little softened butter dabbed onto a piece of kitchen paper, folded over to thicken it, keeping your fingers from the heat. For the first pancake heat the pan until the fat smokes, then turn the heat down a little.

Pour about 4 tablespoons (two small ladles) of the batter into the centre of the pan, and quickly tilt the pan to and fro to spread the mixture thinly across the surface evenly. The amount of batter poured in should just coat the surface of the pan, no more, classic English pancakes are not that thick, making them easy to roll up. 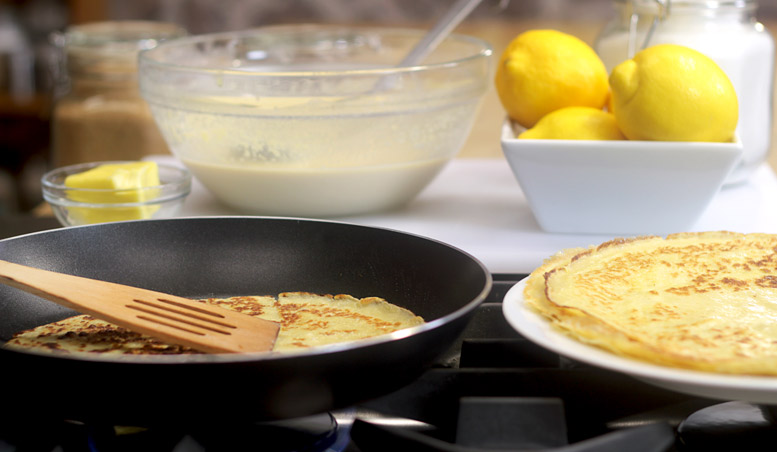 Cook the pancake like this on a medium-high heat for about 1 minute, until the batter has just set, (the bubbles on the top surface are drying out) and the edges are turning light brown and crisp.

Toss or flip the pancake, (if confident) or turn it over carefully with a palette knife or spatula, and cook the other side for about another minute, until it is golden brown underneath.

Turn out the pancake on to a hot plate and sprinkle the top with sugar and lemon juice – roll the pancake up, or fold the pancake in half, then half again. Either serve at once or keep them all on a warm plate and as they stack up keep the plates in a warm oven until you are ready to serve them. Traditionally they are served with a few lemon wedges, and a small bowl of sugar, but you can be inventive with your own fillings and toppings – chocolate, ice-cream, bananas, caramel, marshmallows, whipped cream etc. 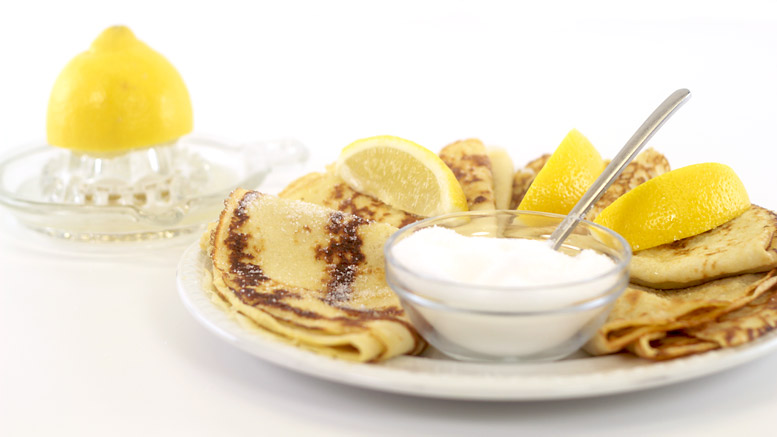 Classic English Pancakes - Folded In Half, Then Half Again