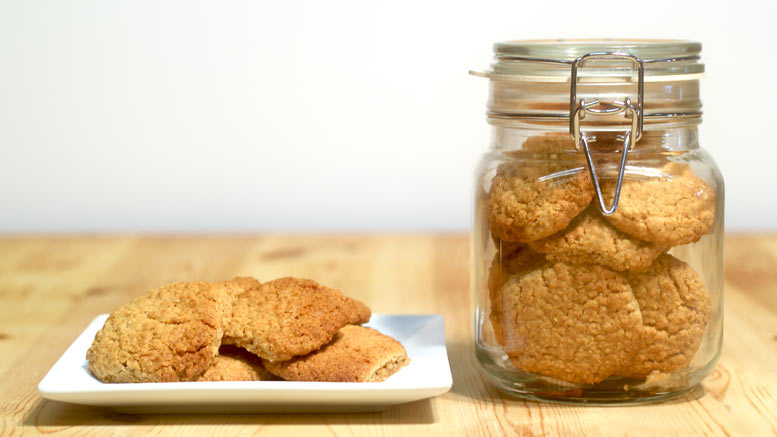 In Scotland Perkins (also known as Parkins) are oat biscuits, with very close roots and ingredients to the ginger, treacle and oat cake of Northern England, and in particular Yorkshire, where it is commonly referred to as ‘Parkin’, (Yorkshire Parkin Recipe). Although there are many similarities, not least the name, the major difference is that Scottish Perkins (or Parkins) are crisp oat biscuits, and not like the more famous softer ginger, oat and treacle Parkin cake of Northern England.

It is important to keep the biscuits as moist as possible, don’t overcook them in the oven, bring them out after ten minutes whilst still golden, soft and flexible, they will quickly firm up and become harder and crisper while cooling. The thicker the centres, the softer the biscuits are inside, (while the outside stays crisp). For much softer biscuits soak the ground oatmeal in some milk overnight before using. Put them in an air-tight tin or jar as soon as they are cool enough.

Use a pestle and mortar (or a spice grinder) and grind up the oatmeal into smaller, finer pieces – you can soak this overnight in a little milk if you want softer biscuits. Then in a large mixing bowl sift in the plain flour and rub the softened butter into it until it becomes like fine breadcrumbs.

Into the flour add the ground oatmeal, ground spices, baking powder, and sugar. Mix these in and then pour in the golden syrup (corn syrup). Use a wooden spoon to mix the ingredients together to start forming a stiff dough. A spoon will only get you so far, when the mixture is clumping together get your hands and fingers in and thoroughly mix the sticky dough together to make a smooth and evenly mixed dough. Add more syrup in if necessary to make a moist mixture.

Grease two baking trays and pre-heat the oven to 180C.

Use a dessert spoon or tablespoon to scoop out a similar sized piece of Perkin mixture each time. Roll the sticky, moist, mixture into a ball between the palms of your hands. Then flatten the ball into round discs just over 1 cm thick – as they bake they will expand and flatten out some more.

Place each round disc on a prepared, greased oven tray. When the tray is full – leave enough space between each Perkin biscuit so they can expand – place the tray in the pre-heated oven and bake at 180C for ten minutes. Pull the Perkins out of the oven when they are golden in colour and still soft. As they cool they will harden up and be very crisp on the outside and softer on the inside. Cool the Perkins on a wire rack – once cool enough put them in an air-tight tin or jar to retain as much moisture as possible.

These Perkins (Parkins) will last over a week fresh in an airtight tin or jar, eat them as they are, with some butter, or traditionally with some jam or fruit preserve. They taste really great and each time you open the jar or tin you will get a lovely smell of cinnamon.

From Mrs. Jennifer MacRae Howie: “My mother was a professional chef and kept her own book, so there I found a recipe [for Perkins] which is credited to her grandmother. My husband’s aunt was a domestic science teacher in Aberdeen and she … agreed that my great grandmother’s recipe is what we would know as a Perkin … GreatGrandMa Walker was from Motherwell“.

Recipe Method: Rub the fat into the flour until it as closely resembles breadcrumbs as you can manage. Add all the other ingredients and mix to a firm dough. (The syrup binds the mix and you may need to add more depending on atmospheric conditions). Grease a baking sheet and drop teaspoons full of the mix onto it. They will spread during cooking so leave room for this. Bake at 350F until brown. Remove from the oven and let cool before transferring to a cooling rack. Eat alone or spread with butter.

Recipe Method: Mix dry ingredients, rub in fat. Mix egg and syrup, add to flour to give a stiff dough. Roll into small balls, place well apart on greased tin. Press half almond on top of each. Bake: 170C for 15 – 20 minutes.