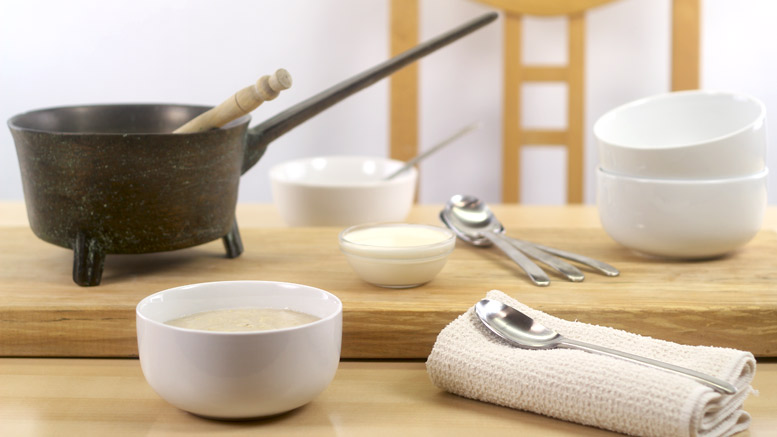 This is the authentic and very simple ‘porridge’ (porage or parritch) eaten by Scots for hundreds of years. In ‘Kidnapped’, by Robert Louis Stevenson, it is explained, “We had the porridge cold again at noon, and hot porridge at night; porridge and small beer was my uncle’s diet.”  The spurtle (or spirtle) is a Scots kitchen tool dating from at least the fifteenth century. It was originally a flat, wooden utensil used for flipping oatcakes on a hot griddle (girdle), but it developed to be more like a round baton or wooden spoon, to also stir the broths and porridge with.

Porridge is traditionally made with oatmeal, also called either oats, milled oats, steel-cut oats, or rolled oats. Rolled oats (which is the most modern way of milling oats – oat groats are rolled into flat flakes under heavy rollers and then steamed and lightly toasted) is the most convenient and quick way to cook porridge, with the other bought oats needing longer to soak or boil. While both in Scotland and Ireland steel-cut oats (which are are whole grain groats which have been cut into pieces) are most commonly used to make their porridge. In England a thinner version of porridge made with oats is called gruel.

enough for 1 or 2 people

The modern way to eat porridge is to replace the water with milk and serve it sweetened with either sugar, golden syrup or honey. Note: to shorten the cooking time oatmeal may be soaked overnight in the water, or rolled oats can be used and boiled for less time. 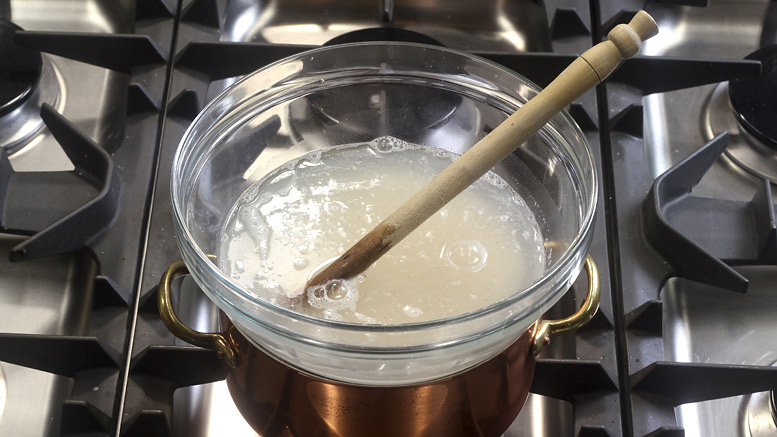 Making Traditional Porridge And Stirring With A Spurtle

In a saucepan bring the water to the boil and sprinkle in the oatmeal, stirring with a spurtle, (wooden spoon). Boil for a few minutes, then pour the porridge into a bowl. Place the bowl over a gently steaming pan of boiling water and leave gently steaming for an hour, (if using rolled oats this can be for 30 minutes) stir with the spurtle every so often.

Once the oatmeal is tender sprinkle in the salt to season and serve. The poorer communities would eat this porridge plain, but in wealthier Scottish house-holds a separate bowl of cream is provided and each spoonful of porridge is first dipped into the cream.