A Traditional Porter Cake Made With Stout

Porter Cake is a rich fruit cake made by adding in Porter, an old fashioned dark beer. Porter is not as widely available as it once was, but it used to be a firm favourite of the working classes of the 18th and 19th century. The name of the beer itself came from its popularity with the street and river porters of London and was generally brewed with dark malts, making it a dark beer, (almost black) as opposed to the lighter golden-brown beers we think of today. This cake is quickly and easily made, tastes delicious and stores very well.

In the early Victorian Period a strong porter was called “Extra Porter” or “Double Porter” (signified with a double XX) or “Stout Porter” and the term “Stout Porter” would later be shortened to just “Stout”. It is thought that the flavour of a traditional Porter is not quite as strong as a modern Stout, so although Guinness, Murphy’s, or another type of stout can be authentically substituted in this Porter Cake recipe, mix it with a little water first, or if you can, buy a recommended Porter such as Fuller’s ‘London Porter’.

Porter Cake is best kept for about a week after baking, (wrapped in greaseproof paper then foil) in an airtight tin and matured before serving. So why not make two, and give one as a gift? The natural preservatives in a Porter Cake means it is perfect for keeping for longer periods in a cool place, which is why the Victorians liked to lay it over in the pantry for unexpected guests. A traditional Irish recipe can be seen here: Porter Cake | Irish Recipe.

Preheat the oven to 160C

Grease with butter (and/or line with baking paper) the base of a large, deep cake tin.

Put the butter, dried fruit, orange zest and juice, sugar and porter in a large saucepan. Bring it slowly to the boil, stirring until the butter has dissolved, then turn down the heat and simmer for 15 minutes. Take off the heat and cool for 10 minutes.

The First Steps To Making The Porter Cake

Stir the beaten eggs into the saucepan mixture, then the sifted flour, baking powder and spice and mix well, to a thick but still runny mixture. Pour into the prepared cake tin, smooth the top with the back of a spoon, and sprinkle over with the sugar and flaked almonds. Gently push the almond flakes part way into the batter with the palm of your hand and pat them down.

Bake for 1½ hours, (90 minutes) or until a skewer inserted in the centre of the cake comes out clean (check after 75 minutes). If the top is browning too fast cover with foil for the remaining baking time. Do not let the cake bake too long or dry out.

Once baked remove from the oven and cool the Porter Cake in the tin for 20 minutes, then turn out, remove the baking paper (if used) and leave to cool completely on a wire rack. Ideally, store the Porter Cake in an air tight tin for a couple of days before eating. Porter Cake will last several weeks if kept wrapped in foil in a lidded tin, in a cool place. Serve sliced on its own or spread with a little butter.

Below is a Victorian explanation of Porter Beer, and the reason for its demise.

Porter, or strong Beer, is a potent fine liquor, transparent, and of a beautiful brownish colour. It is brewed in the same way as ale, with this difference, that in making malt for porter, a much higher temperature is applied, by which it is slightly burned, so that the wort got from it has a dark colour, and a peculiar bitter taste … Different kinds of porter are known in trade by particular names and marks. Mild beer is beer newly brewed; entire consists chiefly of that made expressly for the purpose of keeping; brown stout is a fine strong kind of porter: the degrees of strength are in some cases marked with an X (single X), XX (double X), and XXX (treble X) … London is the chief seat of the manufacture, but Dublin porter is also celebrated. Of late years a general preference is given to mild ale instead of porter; and several of the most eminent London brewers have had to change their manufacture to suit the altered taste of their customers.

An example of a Victorian recipe for ‘Pepper Cake’ using Porter ale:-

A PEPPER-CAKE:.—Quarter stone of flour, two pounds of treacle, two ounces of pearl-ash, infused in a pint of old ale or porter, three quarters ounce of carraways, the same of corianders and Jamaica pepper, one ounce of ground ginger, four ounces of butter, half pound of sugar, two glasses of brandy; beat the seasoning a little, and mix the cake the night before baking. 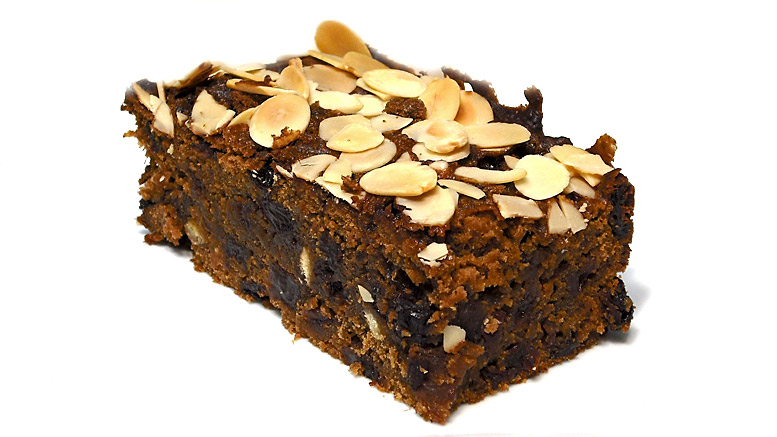 A Traditonal Slice Of Porter Cake