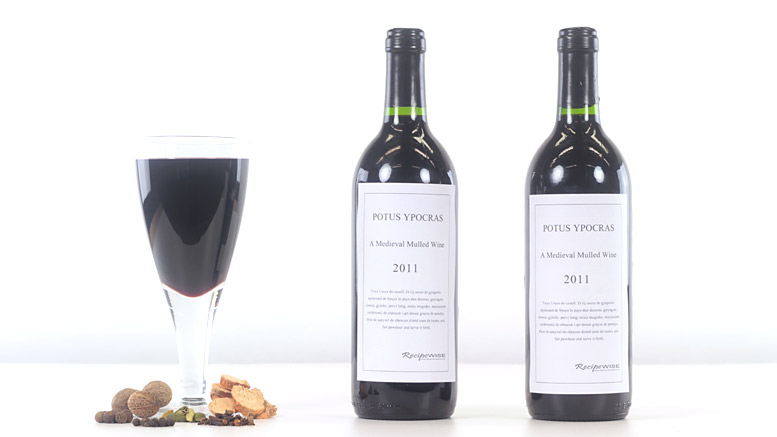 Ypocras (or Hippocras) is a medieval mulled wine recipe, (the word “mulled” simply means heated and spiced); and while many liquids can be mulled, including mead, cider, spirits, ale etc. a mulled wine recipe has always been a traditional and favourite drink of the winter in the UK and Ireland. Many kinds of mulled drinks pre-date Medieval times, but this recipe comes from a 14th Century ‘Ypocras’ found in the medieval manuscript, ‘The Forme of Cury’, which is thought to be the oldest English language cookery and recipe book, (written in medieval England, approx. 1390 A.D.).

The drink is said to have taken its name from the father of medicine, Hippocrates, who made remedies using wine as the base, herbs as the healing or restorative ingredients and honey to make it palatable. Although another assertion is the drink gets its name from the Hippocratic Sleeve, a piece of cloth that was used in the same way one would use a strainer to get the herbs and debris from the steeped fluid.

These drinks were also called, vpocrate, ipocras, ipocrist, hipocras, ippocras, hvpocras, and hvppocras etc. below is the original 14thC receipt and an authentic translated version for use in the modern kitchen. Made up to a month before Christmas these bottles make perfect home-made gifts, and the recipients can enjoy them over the New Year.

However, be aware, typical of the recipes written in the Medieval period the original recipe does not mention two of the most important ingredients, it being expected that the reader would ‘know’ how much to use: these ingredients are the wine and sugar/honey – nor does it specify the proportions needed of each to make the hippocras. The medieval recipe just gives us the ground herb and ground spice mixture to add to the wine and sugar/honey. However, there are other, slightly later recipes, that we can rely on for this missing information, e.g. the 1393 Ménagier de Paris: ‘ypocras’, and the 15th century Viandier de Taillevent: ‘ypocras’ etc.

Purchasing Herbs And Spices: Even the most difficult of ingredients listed in this recipe can now actually be found online for home delivery – we bought all our stocks online – just search for the dried herb or spice at an online specialist stockist, or type into a search engine, “buy spikenard root” (and see what options come up).

Note: This mulled wine can be made within a few days before serving, but it is best made several weeks or months in advance – to let the deep notes of the spices mature into the wine. It is also a really good (and unique) mulled wine so we recommend making up around a dozen bottles, keeping some for yourself, and then make up some wine labels to give them as gifts to friends at Christmas and the New Year.

Original Medieval Recipe From ‘The Forme Of Curry’ 14th Century

Proposed translation: To make hippocras. Three ounces of cinnamon and three ounces of ginger. One penny worth of spikenard of Spain. Galangal, cloves, long pepper and nutmeg. Marjoram and cardamom, a quarter ounce for each. Grains of paradise (or guinea grains) and cassia buds, a tenth ounce for each. So make the powder and use it.

From the translation of the medieval manuscript, ‘Forme of Cury’ by Samuel Pegge

Ypocras (or Hippocras) how it is made (wafers are normally eaten with it). Bishop Godwin renders it  ‘Vinum aromaticum’. It was brought both at beginning of splendid entertainments, and in the middle before the second course, and at the end. It either took its name from the ‘Hippocrates’ sleeve’, the bag or strainer, through which it was passed. Skinner, v. Claret; and Chaucer. or as Junius suggests, because strained ‘juxta doctrinam Hippocratis’. The Italians call it hipocrasso. It seems not to have differed much from ‘Piment’, or ‘Pigment’ (for which see Chaucer) a rich spiced wine which was sold by Vintners about 1250.

There is the process at large for making ypocrasse in a MS. of my respectable Friend Thomas Astle, esq., which we have thought proper to transcribe, as follows:

‘To make Ypocrasse for lords with gynger, synamon, and graynes sugour, and turefoll: and for comyn pepull gynger canell, longe peper, and claryffyed hony. Loke ye have feyre pewter basens to kepe in your pouders and your ypocrasse to ren ynne. and to vi basens ye muste have vi renners on a perche as ye may here see. and loke your poudurs and your gynger be redy and well paryd or hit be beton in to poudr. Gynger colombyne is the best gynger, mayken and balandyne be not so good nor holsom…. now thou knowist the propertees of Ypocras. Your poudurs must be made everyche by themselfe, and leid in a bledder in store, hange sure your perche with baggs, and that no bagge twoyche other, but basen twoyche basen. The fyrst bagge of a galon, every on of the other a potell. Fyrst do in to a basen a galon or ij of redwyne, then put in your pouders, and do it in to the renners, and so in to the seconde bagge, then take a pece and assay it. And yef hit be eny thyng to stronge of gynger alay it withe synamon, and yef it be strong of synamon alay it withe sugour cute. And thus schall ye make perfyte Ypocras. And loke your bagges be of boltell clothe, and the mouthes opyn, and let it ren in v or vi bagges on a perche, and under every bagge a clene basen. The draftes of the spies is good for sewies. Put your Ypocrase in to a stanche wessell, and bynde opon the mouthe a bleddur strongly, then serve forthe waffers and Ypocrasse.’

Note on Spikenard: It is the aromatic root of an Indian plant, the Nardostachys jatamansi, distinguished by its having many hairy spikes shooting out from one root. Later ypocras used lavender or rosemary as a substitute for an incredibly expensive ingredient. A peny worth could mean an amount calculated by the cost of a penny or the amount ground down that will fit on the face of a penny – the latter being more likely, and referenced as such in later texts.

Note on Long Pepper: These are the fruit of the Piper longum, sometimes called Javanese, Indian or Indonesian long pepper – it is usually dried and used as a spice and seasoning. Long pepper has a similar, but hotter, taste to its close relative Piper nigrum – from which common black, green and white pepper are obtained.

Note on Cassia Buds, Berries or Cassia Bark: this ingredient is a problem … the reference to this ingredient in the recipe could mean cassia buds, cassia berries, cassia flowers, or even cassia bark – cassia is a close relative of cinnamon. Dried cassia buds, resembling cloves, are the unopened flowers of the cassia tree, which are picked just before blooming and are dried in the sun – they are used in Eastern dishes for pickles, curries, candies and spicy meats as well as mulled drinks – and this is what I believe the recipe is asking for.

Sugar or Honey: by the 14th and 15th Century either could have been used, or indeed both. Our recipe does not state either, (just like the wine) but we know a sweetner would have been added as these were a common Hippocras ingredient in other recipes.

Note on Grinding Your Own Spices: Using fresh or newly sourced dried ingredients and then grinding them up in a pestle and mortar provides far more flavour than using ready ground ingredients which may have been left in a container for many months.

Grind all the dried spices in a pestle and mortar, or spice grinder, to a fine powder.

In a large saucepan bring the wine and sugar to a boil to dissolve the sugar (or honey). Then remove from the heat. Pour the sweetened wine into a large, non-metallic bowl, and stir in the ground spices. Allow to cool and sit covered for 48 hours.

After sitting for 48 hours, having deeply infused the wine, the spices will create a thick residue which will have settled to the bottom of the bowl. Using a ladle pass the wine into another container through a strainer or sieve (lined with 2 layers of a clean cloth – a cloth with a fine weave such as a cheese cloth, muslin or similar) to remove the larger ground spices, being careful to leave as much of the spice residue in the pot as possible.

Bottle the clear infused wine in sterilized bottles and seal. To be at its best make it up at least 1 month before serving to mature it. To serve, pour the wine into a saucepan and gently re-warm on a low heat before ladeling into glasses. Note: The older it is, the better – however, at a pinch, it can even be made a few nights before and served warm after straining.

* We recommend bottling the infused wine, re-corking it, and then printing off your own label (see our main photo above) to give it to people as gifts for Christmas and the New Year – for someone who has everything, this really is a unique present.