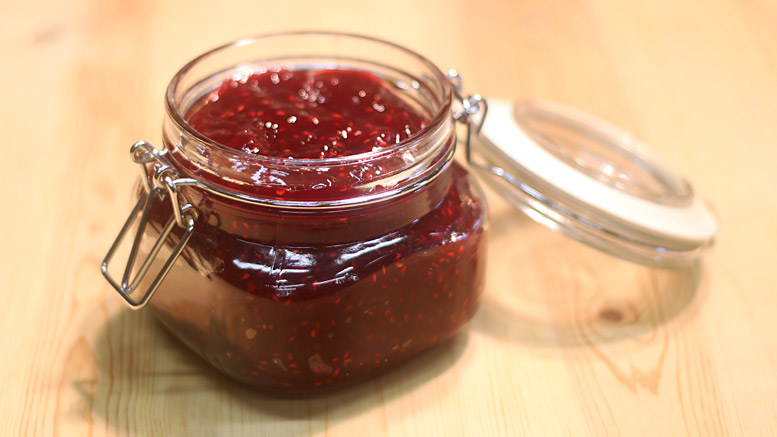 Raspberry jam has got to be one the best jams to use in a multitude of different ways, eaten on fresh bread, used in Jam Roly-poly, spread on Bara Brith etc. It is also one of the easiest jams to make. If you are new to jam making you might want to read this post Jam And Preserve Making first, as it fully explains the main principles you will need to understand to make great home-made jams and preserves.

INGREDIENTS – To every lb. of raspberries allow 1 lb. of sugar, 1/4 pint of red-currant juice.

Mode.—Let the fruit for this preserve be gathered in fine weather, and used as soon after it is picked as possible. Take off the stalks, put the raspberries into a preserving-pan, break them well with a wooden spoon, and let them boil for 1/4 hour, keeping them well stirred. Then add the currant-juice and sugar, and boil again for 1/2 hour. Skim the jam well after the sugar is added, or the preserve will not be clear. The addition of the currant juice is a very great improvement to this preserve, as it gives it a piquant taste, which the flavour of the raspberries seems to require.

Time.—1/4 hour to simmer the fruit without the sugar; 1/4 hour after it is added.

Many recipes just say ‘boil until the jam sets when tried or tested’ experienced jam makers know exactly what this means: Spoon a little of the boiled preserve on to a cold plate, leave to cool for one minute, then push the preserve with a finger, if it has reached the setting point the top of the preserve should wrinkle with a skin. Using a thermometer: Most jams and marmalade’s reach a setting point once they have been boiled at 105C / 220F for 10 to 15 minutes.

In a medium saucepan add the water and redcurrants and simmer on a gentle heat for 15 minutes. After 10 minutes use a ‘potato masher’ to mash the softened redcurrants down to release their juice. Strain the mashed redcurrants, and all the juice, through a fine sieve into a large, heavy bottomed saucepan or preserving pan (jam pan). Use the back of a wooden spoon to press all the juice out of the berries and discard the remains from the sieve. You should be able to get over 500ml of juice out.

Boil the raspberry jam liquid on a rapid rolling boil for 10 minutes, (but start testing to see if it will set at around 7 minutes). Sometimes you have to boil for longer if the fruit is not very good quality or it is too wet to begin with. If you have a jam thermometer, when the mixture reaches a temperature of 104C for ten minutes the acid and the pectin in the fruit react with the sugar, and the jam will set on cooling.

Spoon off any impurities, foam or skin from the top. Then when at the setting point pour into warm, sterilised jars. Leave to cool for a few minutes, then cover and seal. Always write a label, ingredients and date made, for the jam jar. Store in a dark cupboard for up to 6 months.

Note: this raspberry jam will not set firm, but will have a lovely thick, natural oozing quality. Add in extra pectin or use a ‘preserving sugar’ with added pectin if you want a firmer setting. Some people like a clear jam, sometimes known as a ‘jelly’, which is made by straining out the pips, skin and other larger naturally occurring particles from the fruit before setting it.

This is a personal preference, and can be done either by initially softening the fruit on a simmer and then mashing it, and then straining the pulp immediately through a sieve, or leave it over night to drain through a fine meshed straining bag (which is more effective and gets more juice out of the fruit). The clear strained juice is then boiled with sugar to a setting point.