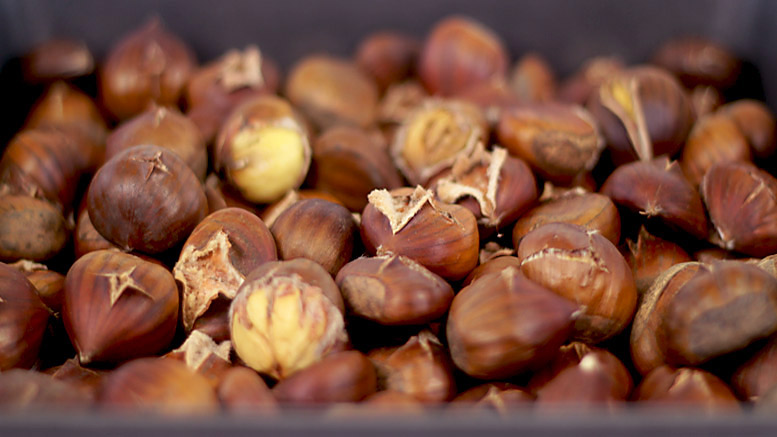 Although many people are uncertain at first about what is needed and what method is best used to roast chestnuts in winter, once they have seen how easy it is, and tasted the results, they will do it again year after year. Basically you take a bag of chestnuts, cut a cross into the skins, so that when roasting them the skins don’t burst open as the nuts swell in the heat, (it helps the moisture to escape) and then roast them by whatever method you choose. And by the way, the actual aroma of roasting chestnuts is worth every penny and ounce of effort you put into it, talk about ‘tidings of comfort and joy’ in winter …

“They first cut the shells with a knife, and then lay them on a pan heated with coals. When the chestnuts are roasted, their taste is not unlike that of the sweet potato”.

” … there can be no- question that the seller of chestnuts on a cold winter’s day is no unwelcome or unsightly object. He is easily found, for the light of his tiny furnace at once proclaims his pri-senca even in the very heart of a London fog. His stock-in-trade are of the simplest description. An old well-worn basket, surmounted by a plain deal board, usually forms the foundation on which his little furnace, very much resembling those used by menders of old glass and china, is supported. On the top of this, on a piece of perforated metal, the chestnuts steam and crackle, as if bidding for a customer. All through the long winter’s day, and no inconsiderable portion of the winter’s night, the seller of chestnuts plies his trade.” 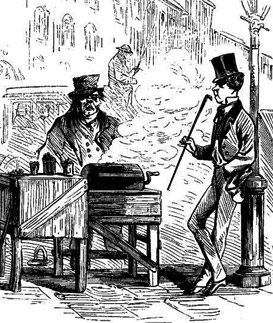 1870: *A CHEAP LUXURY* SNIFFLES LOVES THE SMELL OF ROASTED CHESTNUTS, AND ENJOYS IT FOR HOURS EVERY DAY; BUT HE NEVER EATS ANY—WHICH ACCOUNTS FOR THE JOYOUS EXPRESSION ON THE FACE OF THE VENDER.

How do you know the nuts have been roasted and are ready to eat? The brown leathery skin of the nuts, along the slit you made with a knife, opens and the inner kernel swells a little, going from a whiter to a yellowed colour, and they become ‘sweet’ – try not to over cook them – toasting them in a pan over the open fire takes less time than when roasting them in the oven, as do thinner smaller chestnuts.

Note: Chestnuts must really be boiled or roasted before eating due to their high levels of tannic acid.

Tip: Choosing your chestnuts – look for those which are plump and smooth, (shiny and blemish-free) – mould on and in chestnuts are a common problem – dry and ‘light-weight’ chestnuts should also be discarded.

Tip: To test if the chestnuts are fresh (and fine for roasting) drop them into a bowl of cold water (before cutting a cross in the skins) – if they float they are probably empty, rotten or mouldy and so discard them.

Tip: Some people (and some chestnut street vendors) swear by soaking the chestnuts in salted water first for an hour (after cutting a cross in the skins) before roasting – this is best left to experimentation, we traditionally roast ours dry.

Tip: The skins (shells) are easiest to remove when the chestnut is still warm from roasting – after ten minutes of cooling.

Using a small, sharp knife, cut a cross into the skin of each nut – it doesn’t matter where, although most people recommend the flat side, as long as the cut penetrates the skin. If you do not put this cut into the chestnuts they could ‘explode’ as the heat and moisture/steam builds up under the tough skins – the cut also helps as you peel the chestnuts after roasting. Put the chestnuts into a dry roasting tin (no need for oil or fat) and bake them until the skins open further and the white/yellow nuts insides are tender and a little swollen. This normally takes about 20 to 30 minutes – the bigger and plumper the chestnut the longer they take to cook.

Traditionally chestnuts are served in paper bags and many street sellers still continue this tradition today. To eat them: leave ten minutes and when cool enough peel away all the tough brown leathery outer skin (and the pithy white inner skin) of the chestnut to get to the sweet roasted kernel. On a cold day, at home or outside, these really are a wonderful snack to indulge yourself with, alongside a mulled wine.