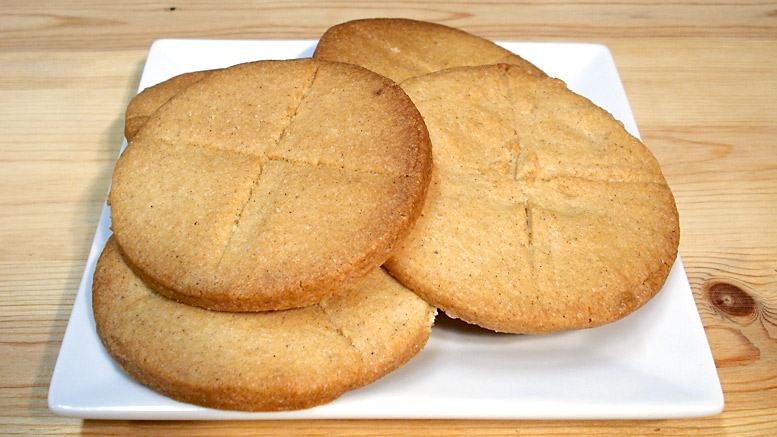 This Soul Cake recipe is from the Cheshire region, on the border with North Wales. A Soul Cake (or Souling Cake) is a small round cake, like a biscuit, which is traditionally made for All Souls’ Day (the 2nd November, the day after All Saint’s Day) to celebrate the dead. These plain cakes, often simply referred to as souls, were given out to the soulers, children and the poor, (beggars) who would go from door to door during this period saying prayers and singing psalms and songs for the dead.

Traditionally each cake eaten would represent a soul being freed from Purgatory. The practice of giving and eating soul cakes is often seen as the origin of modern day Trick or Treating, which now falls on Halloween (two days before All Souls’ Day). The tradition of ‘souling’ and giving out Soul Cakes on All Soul’s Day originated in Britain and Ireland hundreds of years ago, from giving out bread on All Souls’ Day during the devout Middle Ages (see John Mirk below).

Other, similar traditions, although not as wide-spread, can be seen in Catterning and Clementing – note, these are thought to be all the same basic traditions (Charlotte Burn, 1914) and the Catterning Cake Recipe given (using a leaven bread dough) has its beginnings in the earlier Medieval Breads given out on All Souls’ Day, and should be made alongside these souling cakes.

Soul cakes and breads were often made by drawing a cross shape into the dough before baking, signifying their purpose as Alms for the dead. This particular regional recipe is from the Victorian age, although because of the traditional simplicity of the ingredients it is probably much older.

The soul cakes mentioned in the song are the remnants of Pre-reformation beliefs concerning the need to help souls out of Purgatory by prayer and alms-giving. It was sung in the Victorian period (or perhaps earlier) on All Souls’ Day by soulers.

2. From John Mirk’s ‘Festial’ (14th Century Manuscript) “… wherefore in olden time good men and women would this day buy bread and deal [give] it for the souls that they loved, hoping with each loaf to get a soul out of purgatory”.

3. From Shakespeare’s ‘Two Gentlemen of Verona’ (ii.i) “to speak pulling, like a beggar at Hallowmas”.

Tasting Notes: These are not really ‘cakes’ but rather biscuits or cookies, and delicious ones at that. The cinnamon sweetness predominates in this biscuit, which is very like a buttery ‘short bread’ in texture, and the white wine vinegar is almost unnoticeable, being balanced out by the sugar and mixed spice. However it is this balance which makes for a very moreish treat … although these souling cakes look plain, don’t let that fool you, they are very tasty and when fresh baked are very crisp, (they will last in a biscuit barrel for several days).

If giving them out around the Halloween period as is traditional for ‘trick or treat’ goodies, it would probably appeal much more to the adults chaperoning the children, who might be tired of all things sweet when they get to you. Although, by adding a period icing ‘glaze’, using an egg white whisked into powdered icing sugar, it would certainly enhance it for the younger members of the family.

Preheat the oven to 200C and grease 2 flat baking trays

Thoroughly mix all the dry ingredients into a mixing bowl – sifted flour, spices, and sugar. Rub in the diced butter until the mixture resembles fine breadcrumbs. Add in the beaten egg and white wine vinegar and mix with a wooden spoon until a firm dough is made. Then cover it and put it in the fridge for 20 minutes.

Flour a working surface and roll out the dough to 7mm thick and using a large round pastry cutter cut into rounds, (optional: use a straight edge to press into, and then draw a cross shape, in the top of the dough). Place these rounds on the greased baking tray and bake in the oven for 15 to 20 minutes at 200C until slightly coloured. Serve warm or cold. 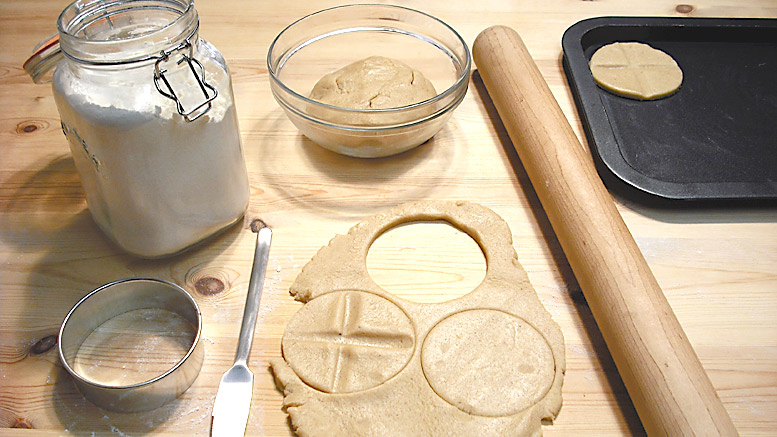 This recipe comes from ‘Country Dishes’ edited by Barbara Hargreaves, from the introduction: “… traditional Farmhouse Recipes from counties of Great Britain compiled by Suzanne Beedell from a host of recipes collected from farmers’ wives … also contributions from [earlier publications] County Federation of Women’s Institutes and Farmers Weekly … recipes handed down to them, and which they have proven. Thanks to all those who have preserved them.” These recipes were first published in 1962, with local and regional recipes handed down in families and dating from the 1800s.

Mix dry ingredients, rub in fat, drop in egg and vinegar and knead till soft. Roll out 1/4 inch thick, cut into rounds with a big cutter, bake in moderate oven for 15 or 20 minutes, until slightly coloured.