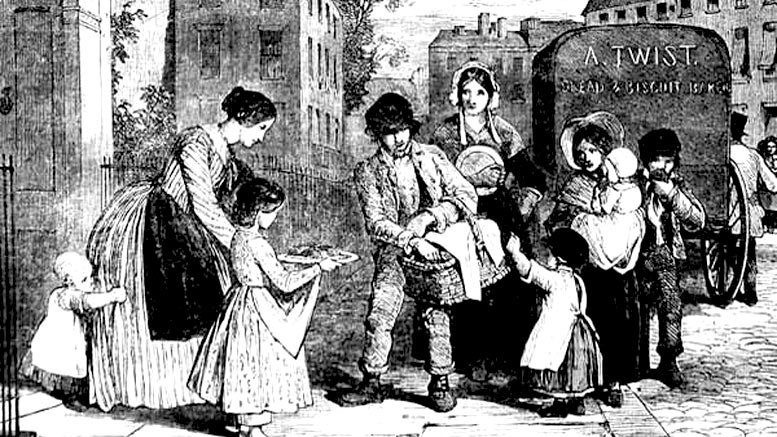 Even before the great Medieval expansionism of religion and ceremony into almost every part of everyday life, marking baked goods (like breads, buns and cakes) with the sign of a cross was a common thing for a baker to do. The cross was said to ward off evil spirits which could affect the bread, and make it go mouldy or stale, so bakers used it, and customers looked for it. In this it can be said that both marketing and devotion played a part. So to say Hot Cross Buns had an ‘exact’ beginning is misleading, many bought breads were marked in this way.

Kate Colquhoun, writes in her book, ‘Taste: The Story Of Britain Through Its Cooking‘, (published in 2007), “In honour of Eastre, goddess of spring and the dawn, [Anglo-Saxon] bread dough could be studded with dried fruits and baked into small loaves that, as Christianity spread, began to be marked with a cross by monks: the earliest form of hot-cross bun”. This type of Christian appropriation, or ‘bowdlerisation’, of a pagan food item can be seen in many food histories in many European countries. However, in much of England and Wales, it was during the 1600s, under the influence of the Puritans, (a reforming movement within the Protestant Church of England) that the common practice of marking a cross on all commercially baked goods was condemned as ‘Popish’ or ‘Popery’ (Catholic behaviour) and it was stopped, remaining for only certain goods, at certain times of the year.

“They are suspicious of ceremonial in worship, partly because they are suspicious of everything they have learned to associate with what, no doubt, they called Popery. They are apt to see Popery in talk about altars or in a cope or in the sign of the cross. One may, at this point, be reminded of Zeal-of-the-Land Busy, finding Popery in gingerbread and talking sad nonsense in Bartholomew Fair.”

Tra. And what’s my gingerbread, I pray you ?
Busy. The provender that pricks him up. Hence with thy basket of popery, thy nest of images, and whole, legend of ginger-work.
Lea. Sir, if you be not quiet the quicklier, I’ll ha’ you clapp’d fairly by the heels, for disturbing the Fair.
Busy. The sin of the Fair provokes me, I cannot be silent.

So it is at this point in time, from the late 1600s, (after the English Civil War) with only bread, cakes and buns made on Good Friday continuing to bear a cross* (in token of the Crucifixion, and with Puritan blessings) that we can say the ‘Cross Bun’ became a ‘special’ and ‘unique’ bread.

*The practice of marking a cross in breads etc. continued for longer in the more Catholic regions of Scotland and Ireland. While in England and Wales regional superstitions and customs saw the continuation of the cross being made in Soul Cakes for All Souls Day right up to the end of the 1800s (although this practice was not as widespread).

Exactly where and when the practice of baking buns and then using them in a religious ceremony can be traced back to is open for debate – of course food (particularly leavened and unleavened bread) and religion have been intricately linked for thousands of years, well before Christianity, going back even to the stone age. However, in the 1700s, ‘buns’ were specifically looked at by scholars, who thought they could be traced back to ancient Greek and Roman customs …

‘A View Of Northumberland’ By William Hutchinson and Thomas Randal, Published 1778

I intimated in the preceding pages, an intention of remarking the Sweet Bread used in religious rites. Small loaves of bread, peculiar in their form, being long and sharp at both ends, are called Buns. This name takes place where old religious ceremonies have been solemnized, derived from the consecrated sweet bread, which was offered on high festivals … the offerings which people in ancient times used to “present to the Gods”, were generally purchased at the entrance of the temple; especially every species of consecrated bread, which was denominated accordingly. One species of sacred bread which used to be offered to the Gods, was of great antiquity, and called Boun .… The custom of Hot Cross Buns in London, on the morning of Good Friday, seems to have relation to these ancient practices. We only retain the name and form of the Boun; the sacred uses are no more.

The sign of the cross marked into breads was acceptable on Good Friday to the Puritans (and other Protestant groups) because it commemorated the crucifixion of Jesus Christ and his death at Calvary. A date observed by most Christians during Holy Week as part of the Paschal Triduum.

Note: The major feast days kept in the Christian Church are called moveable and immoveable, Good Friday and Easter Sunday are moveable … “The Book of Common Prayer contains several tables for calculating Easter, and the following rules to know when the moveable feasts and holydays begin: Easter Day, on which the rest depend, is always the first Sunday after the full moon, which happens upon, or next after, the twenty-first day of March; and if the full moon happens upon a Sunday, Easter Day is the Sunday after.” From ‘A Church Dictionary’, by Walter Farquhar Hook, published 1852.

Also, within the Christian calendar, Good Friday And Easter Sunday fall at the end of the Season of Lent. A time when Christians prepare for the ‘Holy Week’, of which Easter Sunday is the culmination. It lasts forty days (not counting Sundays), beginning on Ash Wednesday and ending on Holy Saturday, the last day before ‘Easter’. The traditional preparation toward Easter Sunday consists of prayer, fasting, and almsgiving and the eating of Water Cakes. So Good Friday, and the food consumed on this day – Good Friday Buns / Hot Cross Buns – are also traditionally a part of Lent fasting.

From the late 1600s a tradition and custom grew whereby a particular ‘spiced bun’, Good Friday Buns, (becoming more commonly referred to as Cross Buns or Hot Cross Buns) made with a cross on them, were eaten for breakfast on Good Friday.

From the famous diary of Samuel Pepys we know that on Good Friday in 1664 he ate buns (or ‘wiggs‘) but rather than for breakfast he had them just before he went to bed, with some ale, which he called a ‘Lenten supper’. “So home to dinner, and had an excellent Good Friday dinner of peas porridge and apple pye … then to walk in the garden with my wife, and so to my office a while, and then home to the only Lenten supper have had of wiggs* and ale, and so to bed.” [*recipes for regional wiggs show they are a spiced fruit bun, similar to a later Hot Cross Bun, or a plainer caraway seed bun, similar to an earlier Good Friday Bun].

Wiggs. Put half a pint of warm milk to three quarters of a pound of fine flour; mix in it two or three, spoonsful of light yeast. Cover it up, and set it before the fire an hour, in order to make it rise. Work into it four ounces each of sugar and butter, make it into cakes, or wiggs, with as little flour as possible, and a few caraway seeds, and bake them quick.

While Dr. Johnson, another distinguished man of letters, did keep this Good Friday breakfast tradition by eating cross buns – from ‘The Life Of Samuel Johnson’, by James Boswell, published 1791: “On the 9th of April [1773], being Good Friday, I breakfasted with him on tea and cross-buns … On April 18 [1783], (being Good-Friday) I found him at breakfast, in his usual manner upon that day, drinking tea without milk, and eating a cross bun to prevent faintness”.

Cross Buns. Put two pounds and a half of fine flour into a wooden bowl, and set it before the fire to warm; then add half a pound of sifted sugar, some coriander seed, cinnamon and mace powdered fine; melt half a pound of butter in half a pint of milk; when it is as warm as it can bear the finger, mix with it three table spoonsful of very thick yeast, and a little salt; put it to the flour, mix it to a paste, and make the buns as directed … put a cross on the top, not very deep [… put them on a tin, set them before the fire for a quarter of an hour, cover over with flannel, then brush them with very warm milk, and bake them of a nice brown in a moderate oven]

Yet this custom of eating cross buns was not just for the rich. For the poorer, working classes, any major feast day was also welcomed, particularly Easter and the buns associated with it: “They eat cross buns on Good-Friday—they are merry at Easter—and mad at Christmas … as to holidays, let the poor take as many as they can afford, and their masters can spare. Far be it from us to wish to abridge their liberty, or diminish their little enjoyment of life”, taken from ‘The History And The Mystery Of Good Friday’, by Robert Robinson, published 1782.

By the 1700s, in the big towns and cities, these Cross Buns were sold on the streets all day long by street sellers crying, “One-a-penny, two-a-penny, hot-cross buns” – [a penny for a larger bun or two smaller ones – see the extract later on from ‘Chambers Journal’ in 1855 for more details].

Although the first name for these buns were Good Friday Buns or Cross Buns the earliest written instance of the name ‘Hot Cross Buns’ comes from 1733 A.D. The name is recorded in a popular rhyme or ‘ditty’; it is also interesting because it includes the old reason and superstition for making the sign of the cross in baked goods:-

“Good Friday comes this month—the old woman runs
With one or two a-penny hot cross buns,
Whose virtue is, if you believe what’s said,
They’ll not grow mouldy like the common bread.”