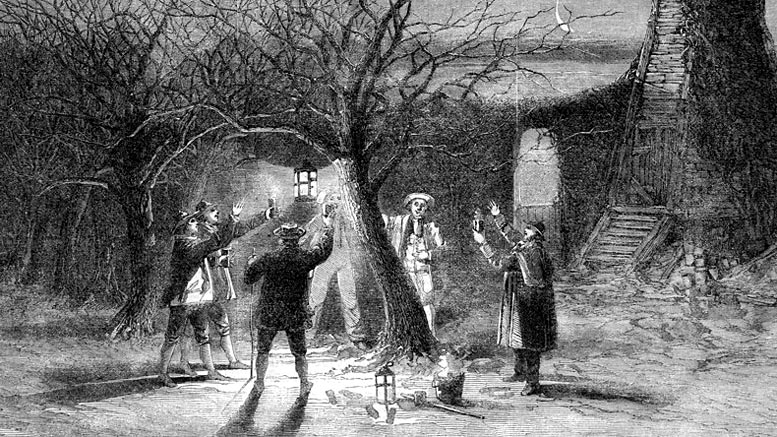 Wassailing is the ceremony of blessing the ground around your home, farm or orchard. The oldest ceremonies go back to Pagan times, seeking to start off the first stirrings of life in the land, and to help it emerge from winter – ensuring that the next season’s crop, (especially apples and pears in the orchard) will be bountiful. The most common date for this custom to now take place is Twelfth Night, the night of the 5th January, or on the ‘old’ 12th Night, January 17th – but it can vary as a tradition from one local area to the next, over the whole period of mid-winter.

‘wassailing’ from the Oxford Dictionary of ‘English Folklore’

[there are two customs] The first is a ‘house-visiting’ custom, wishing health to neighbours, and the other is what could be termed a ‘field-visiting’ custom, wishing health to, usually, fruit trees, but also sometimes other farm crops, animals and so on. The proper day for wassailing varied from place to place, but was always mid-winter, at Christmas or New Year, and the name also varies considerably, including vessel-cup, waysailing, and howling.

In the first ‘house-visiting’ version, young women went about the neighbourhood with a bowl of drink, often spiced ale, dressed up with garlands and ribbons … the drink … was often described as Lamb’s Wool, made from spiced ale or cider and baked apples. [the women would sing] “Wassail, wassail all over the town, Our toast is white, our ale is brown, Our bowl it is made of a maplin tree, We be good fellows all, I drink to thee.”

The second form of wassailing ‘field-visiting’ was much more of a man’s custom … involved visiting the local orchards and wassailing the trees to encourage a good crop in the coming year. Songs would be sung, the trunks beaten with sticks or splashed with cider, cider soaked toast might be laid at the roots or placed in the branches …. [the men would sing] “Here stands a good apple tree, stand fast root, Every little twig bear an apple big, Hats full, caps full, and three score sacks full, Hip! Hip! Hurrah!”

” … It was likewise the custom at all their feasts, for the master of the house to fill a large bowl or pitcher, and to drink out of it first himself, and then give it to him that sat next, and so it went round. One custom more should be remembered, and that is, that it was usual some years ago, in Christmas time, for the poor people to go from door to door with a wassail cup, adorned with ribbands, and a golden apple at the top, singing and begging money for it, the original of which, was, that they might procure ‘lamb’s wool’ to fill it, and regale themselves as well as the rich.”

The practice of Wassailing has survived down the centuries, although it is probably now most commonly celebrated in the cider and perry areas of the UK, notably in the ‘West Country’ of Somerset and Gloucester. However, it should be noted that the ale-based recipes are considered to be older than those based on cider.

Lambswool, or Lamb’s Wool, is one of the traditional drinks of the ‘Wassail’, (or Apple Howling) it is either so called after the light colour and frothy appearance of the drink on the surface, or, as Richard Cook in 1835 believes, it stems from being served at La mas ubal, that is, ‘The Day of the Apple Fruit’; and being pronounced lamasool, it was corrupted to Lambs Wool. It is made with either hot ale or cider and roasted apples. Wassail: “a liquor made of apples, sugar, and ale; a drunken bout; a merry song”. Samuel Johnson’s Dictionary, published in 1756.

The word wassail derives from the Old English words wæs (þu) hæl which means ‘be healthy’ or ‘be whole’ – both of which meanings survive in the modern English phrase to be, ‘hale and hearty’. While the first reference to wassailing dates back to 1486-93 AD for payments for wassails at the New Year at St Mary De Pre Priory in St Albans.

On twelfth-night, (either the new one on the 5th January or the old one on the 17th January) toast a thick slice of rustic bread and place it into the bottom of a communal bowl. Then pour in the prepared lambswool. Take the bowl out into your garden, field or orchard, with friends and family, carrying lighted torches aflame, and pots and pans to beat with wooden spoons and sticks, (with more toast to hang in the branches of the trees and more cups of lambswool to drink and splash around to bless the area).

Make noise and light, crying “wassail! wassail!” (or sing one of the many rhymes) to drive off the unwanted spirits of the old year – beat the trunks of the trees with the sticks and splash the trunks with a little Lamb’s Wool. After everyone present has taken a drink from the lambswool (from the communal wassail bowl) pour a little of the lambswool and soggy toast from the bowl into the ground around the roots of a tree and put further fresh pieces of toast, dipped in lambswool, into the branches as a token to the new spirits of the new year, and a nod to the old ways of doing things.

From ‘The Mirror Of Literature, Amusement And Instruction: Vol 1’, Published 1823

Origin Of The Wassail Bowl

New Year’s Eve, as well as New Year’s Day, was anciently celebrated with various observances. One of the most popular of these was the custom called “Wassail” which is still retained in several parts of the country: on this occasion, young women go about with a wassail-bowl of spiced ale, with some sort of verses, which are sung by them as they proceed from door to door. This term “wassail” is derived from the Anglo-Saxon Vaa hael—be in health; and is well illustrated in the story of Vortigern and Bowena, which being well known to all readers of English history, need not be here repeated. The wassail-bowl, according to Warton, was Shakspeare’s “Gossip’s bowl” in the Midsummer Night’s Dream. The composition was ale, nutmeg, sugar, toast, and roasted crabs or apples. It was also called “lamb’s wool”. Was-haile and drinc-heil are said to have been the usual ancient quaffing among the English, and were synonymous with the “Come, here’s to you” and “I’ll pledge you” of the present day.

Milner, in a dissertation on an ancient cup, supposed to be a wassail cup, inserted in the eleventh volume of the “Archav ologia,” informs us that the introduction of Christianity amongst our ancestors did not at all contribute to the abolition of the practice of wassailling; on the contrary, it began to assume a sort of religious aspect; and the wassail-bowl itself, which in great monasteries was placed on the Abbot’s table, at the upper end of the refectory, or eating-hall, to be circulated amongst the community at his discretion, received the honourable appellation of Poculam Charitatis. This, in our universities, is called the “Grace Cup”.

A song called the “Wassailling Song” from the information of the late Mr. Lysons, is still sung on New Year’s Eve, in Gloucestershire. The wassaillers bring with them, that gentleman tells us, a great bowl, dressed up with garlands and ribbands, the first verse of which is—

“Wassail, wassail! all over the town, Our toast is white, our ale is brown; Our bowl is made of maplin tree, We be good fellows all—I drink to thee.”