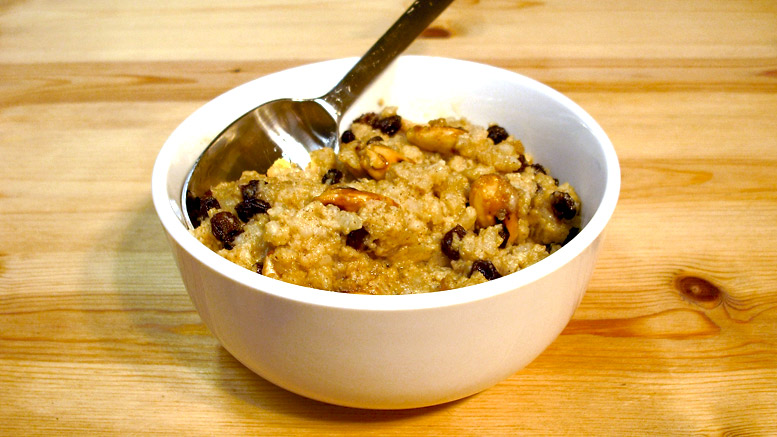 Whitepot, (or white-pot) is a delicious late Tudor early Stuart dessert recipe from 1615, particularly associated with Devon in the South-west of England, and it is one of the best tasting baked puddings of the early modern period. These rice pudding ‘whitepot’ recipes (which were also sometimes made of bread and butter) were very popular, and were published in most of the cookery books from the seventeenth-century onwards; their heritage can still be seen in the modern rice pudding or bread and butter pudding desserts of today.

It is called ‘whitepot’ because the ingredients inside the baking pot (going into the oven) are glistening white, with the cream mixture. However, it comes out a lovely golden colour on top because of the cinnamon, egg yolks and sugar in it. This particular Rice Pudding tastes very creamy, and the subtle taste of the cinnamon, with the currants, give a sweetness which is delightful; while the comfits lift the dish, making them worthwhile to make yourself.

In Europe rice was introduced into Spain first, probably around the 10th century, from trade with Asia, (India) although it was not until the 15th century that it was widely cultivated in both Spain and Northern Italy. And it was from these regions that Britain derived much of its rice supplies in this period. The type of grain to use in this pudding can be either short or long grain, both were grown, although the short, ‘risotto’ type of rice (Arborio) started to predominate in the regions importing to Britain in the 17th century.

Take the best and sweetest cream, and boil it with good store of sugar, and cinnamon, and a little rose-water, then take it from the fire and put into it clean picked rice, but not so much as to make it thick, and let it steep therin till it be cold; then put in the yolks of six eggs, and two whites, currants, sugar, cinnamon, and rose-water, and salt, then put it into a pan, or pot, as thin as if it were a custard; and so bake it and serve it in the pot it is baked in, trimming the top with a little sugar or comfits.

The 1 litre of cream makes this a very rich and indulgent pudding, if you want to reduce the cream with 50% milk to make it less rich, it will still taste great: however, it is recommended to have it on a few special occasions made with just cream. This will make 8 to 10 portions. 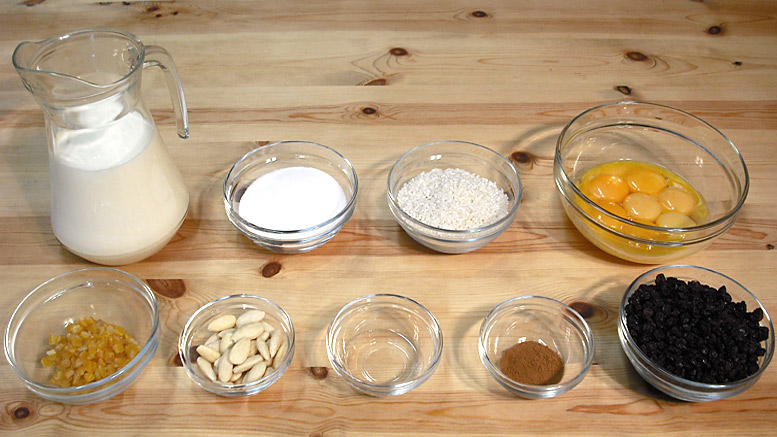 Ingredients For A Whitepot Rice Pudding

In a heavy bottomed saucepan simmer the cream for 4 minutes on a low heat. Using a whisk, whisk in the cinnamon and rose water, frothing the cream. Simmer for another 4 minutes. Turn off the heat, and stir in the rice. Leave to cool for 20 minutes. 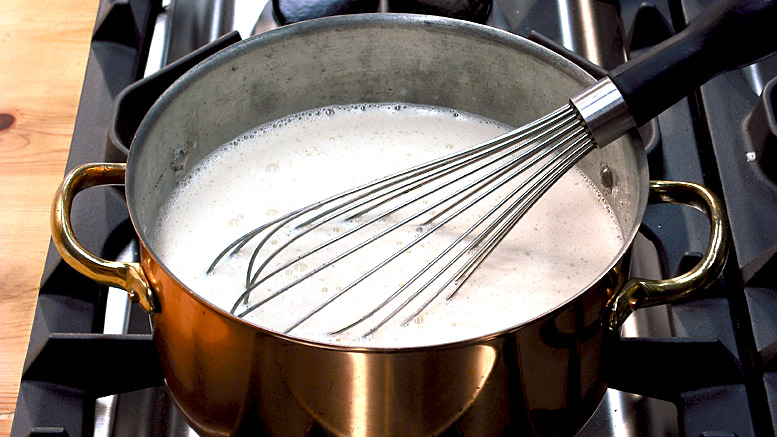 Simmering The Milk And Rice For The Whitepot

In a large mixing bowl whisk the egg yolks and egg whites, then beat in the sugar until creamy. When the rice and cream has cooled for twenty minutes pour it into the eggs and sugar slowly, whisking it in. Make sure you whisk for a few minutes, and that the cream is not too hot, so that the eggs do not scramble. Finally stir in the currants.

Pour this creamy/rice/currant mixture into a heatproof bowl or pot and put into the oven to bake for 60 minutes at 180C. After twenty minutes remove from the oven and stir the mixture fully to make sure the rice and currants are not sticking to the base of the bowl. And again, after 40 minutes, remove the pudding from the oven and stir everything, add a little more cream or milk if the mixture is getting a little too dry – sprinkle some sugar over the top of the whitepot. Then leave in the oven for the last twenty minutes to develop a golden, sugar crust on top. 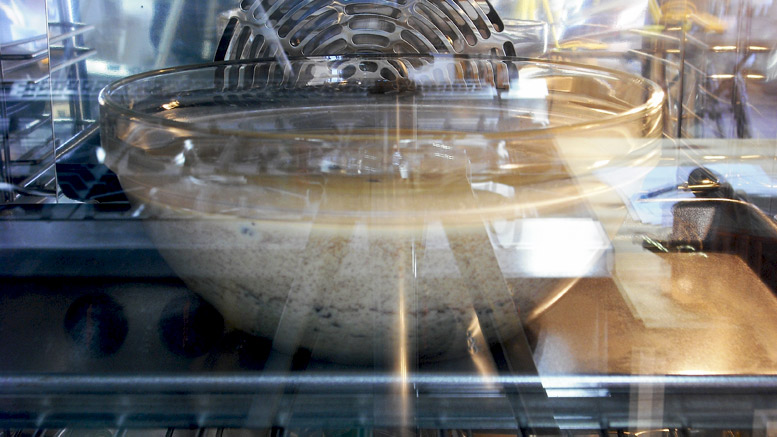 Baking The Whitepot Rice Pudding In The Oven

For the comfits: In a dry frying pan, over a medium heat, lightly toast the almonds. When gently toasted bring them all into the centre of the pan and sprinkle over the sugar, stir so they are fully coated, and as the sugar starts to melt, add the water, to make a simple sugar syrup. Coat all the almonds in the syrup and remove to a small bowl to cool. The almonds will stick together as they cool, but they can easily be broken apart over the white pot pudding when it is removed from the oven. 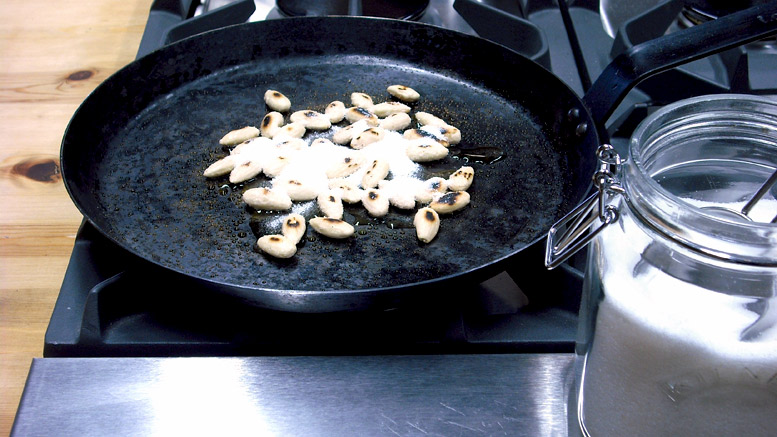 Making The Almond Comfits For Decoration

After 60 minutes in the oven the whitepot is now ready. Test to see if the rice is soft – leave for a little longer if the rice needs to soften more. It will have gone a lovely golden colour from the cinnamon, sugar and egg yolks as it was baked. Leave to cool for twenty minutes (or longer).

To serve: As Gervase Markham said in 1615, “… serve it in the pot it is baked in, trimming the top with a little sugar or comfits”. Eat warm or cold. Put a wooden board on the table, place the whitepot on it, sprinkle over the almond comfits and serve in small bowls. 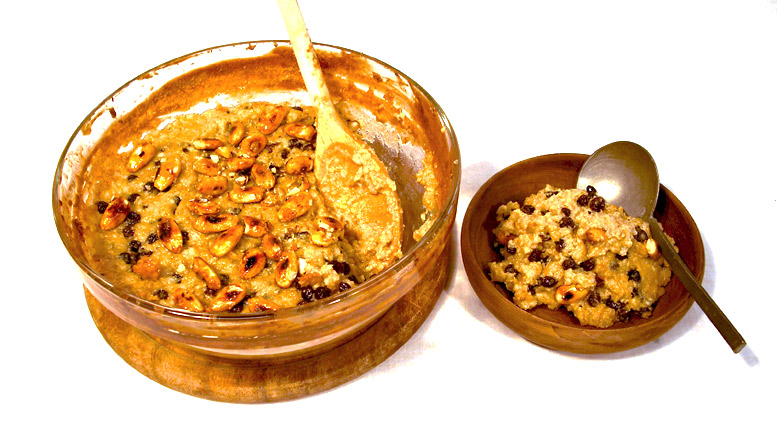