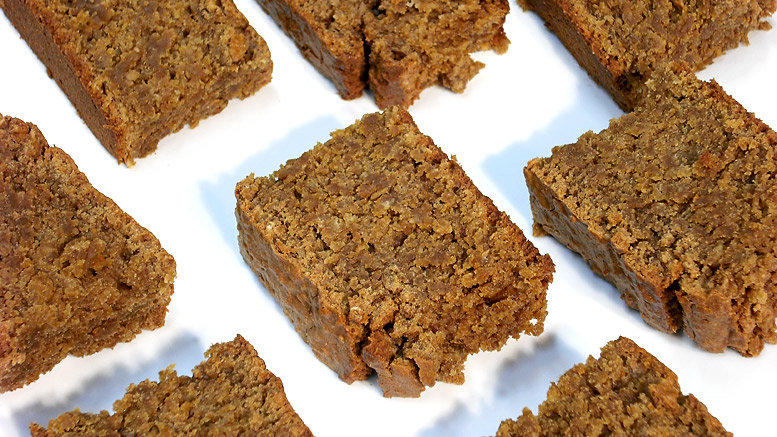 Yorkshire Parkin (also known in some areas as Perkin) is a regional ginger cake of the north-east of England – with some slight variations in ingredients across the area. Having read and made many different authentic recipes for Parkin, many coming from ‘A Yorkshire Cookery Book’ published in 1916, I believe the following late Victorian recipe given below to be both the most typical and the best; neither the ginger nor the black treacle over-powers, but leaves a lovely warmth in the mouth after eating.

Within Yorkshire the Parkin (Perkin) is a well known dark brown ginger cake, and it is also enjoyed in nearby regions and counties, even in Lancashire. However, it is the black treacle and oatmeal which distinguishes this ginger cake from the ginger cakes of Britain’s more southerly regions. Both of these ingredients must be present. In Yorkshire it is also a particular favourite (traditional) cake to be served on the 5th of November, Bonfire Night.

Note on baking: The oats in the Parkin recipe will absorb a lot of the cake’s moisture when baking, so make sure the cake batter is ‘wet’ enough when fully mixed, add a little extra milk in if it needs it. Also check after 45 minutes to see if the Parkin is baked, if it is still soft in the middle, without being ‘raw’, it is done – this cake is easy to over-bake and become dry. Also note, the top of the cake will naturally split slightly as it bakes, as the oats enlarge.

To eat it at its best make it at least a day before eating (the ginger mellows and the cake takes on a more mature taste) it is also best then cut into the day after baking, not straight from the oven, and it really does go well with some apple or apple and pear compote spread on it. Normally in a recipe treacle and golden syrup are measured out in tablespoons, however a lot of both are needed in this recipe, so the amount is given in grams.

Beat the eggs together in a small bowl.

To begin making the Parkin, melt together the butter, sugar, treacle (molasses), and golden syrup (corn syrup) in a large, heavy-based saucepan, over a gentle heat for a few minutes – do not allow this mixture to get too hot or bubble. When everything in the saucepan has melted and mixed together, (which takes a few minutes for the butter and treacle to mingle) take off the heat and allow to cool slightly.

In a large mixing bowl stir together all the other dry ingredients (sift in the flour) and make a well in the centre.

Gradually add in the cooled, melted butter, sugar and treacle mixture into the well, stirring to coat all the dry ingredients and folding them in. Finally add in the beaten eggs, and then the milk and mix thoroughly. If the mixture is a little dry add in a little more milk to loosen it. It needs to be wet enough so that the oats do not soak up all of the moisture while baking.

Preheat the oven to 180C

Pour the mixture into the prepared tin and cook for 50 to 60 minutes until firm and set, check after fifty minutes to see if it is done by pushing in a skewer into the centre of the Parkin Cake to see if it comes out clean – it might need another 10 to 20 minutes, depending on your oven.

Remove the cake from the oven when it is done, and leave to cool in the tin for twenty minutes. Once cooler tip out on to a cake rack to completely cool down. Store the Parkin wrapped in greaseproof paper in an airtight tin for a minimum of 1 day and up to a week before slicing the cake into squares and eating; this allows the flavours to develop and the mixture to soften and become moist and sticky.

Serve as it is, sliced or cut into squares, or spread with a little butter or serve with a seasonal fruit compote.

Note: Parkin is a traditional northern working-class cake, dating from the Industrial Revolution – and was a weekly treat if it could be afforded. It was popular not only for the taste but because it could be kept for a week or two in an air tight tin or box to serve to guests for tea. In some households an aged Parkin (of at least a few days old) is much preferred, and often eaten with a seasonal fruit compote, such as gooseberries or apples.

Regional variations: (see below) traditional Parkin recipes can call for the use of butter, while some use lard, and a few use beef ‘dripping’. Some use golden syrup (corn syrup) most use black treacle (molasses) some use both. Some add salt to the ingredients, while still others use wholemeal flour instead of plain. Some use the rind and juice of a lemon, some add ground mixed spice, or nutmeg. Some use Baking Powder, others Bicarbonate of Soda, a few use both … etc.

A Few Regional Differences In Ingredients For Parkin:

Taken from ‘A Yorkshire Cookery Book’ (1916) – recipes for which Mary Gaskell collected from Yorkshire housewives in order to print in a cookery book to raise money for the 1st World War.

Traditional Shape Of Parkin: Modern day Parkin (Perkin) is often baked in a cake or loaf tin, and then cut into slices, but in the Victorian period, and early 20th Century homes, the Parkin would have been baked in a large oven roasting dish, typically used for roasting joints of meat or Yorkshire puddings in, to produce a much bigger squarer and thinner cake, which would be cut into large square ‘slabs’ to be eaten.