Watch The Video Above: An introduction to the range of authentic and traditional English, Irish, Scottish and Welsh cookware, baking plates, griddles and bakestones that Oakden make. Order yours today …

Working from the Welsh/English marches near Gloucestershire we have been making our hand-made reproductions (based on our own large private collection of originals and historically researched designs in books from our library) for over 40 years.

Our baking plates reflect the regional differences found in bakestones and griddles from Wales, Scotland, Ireland and England. With over forty years of collecting, researching and selling authentic and traditional cookware, we have come across many regional variations, designs and individual embellishments; however there are only really two ‘basic’ designs used in the UK, the flat bakestone or the hanging griddle.

Across the UK and Ireland Griddles and Bakestones were made locally in a number of different shapes and designs, (made by local Blacksmiths in cast or wrought iron – or after the late 1800s in mild steel by factories) depending on the local raw materials, the main foods cooked and the cooking fuel available.

What is notable from watching many of the modern documentaries filmed in rural parts of the world is just how common in shape and size many of the metal baking stones used in remote villages are. We are often surprised to see a flat round baking stone similar in size and shape to the Welsh bakestone being used to cook on in such diverse parts of the world as South America and India.

Hanging or Flat Griddles : Before the 1800s poor quality coal and peat fires (Wales and Ireland) which produced a lot of thick smoke (and sometimes not much heat) were not good to cook from height over and therefore the regional designs of baking irons seen reflect this by being used directly over the fire – the flat Welsh Bakestone and Long-handled Griddle. These were very often used on top of ‘fire dogs’ or wrought iron stands, placed either over the open fire or next to it, depending at what stage the fire was at.

While the cooking fuels of glowing charcoal, good quality coal and wood fires (Scotland and England) produced far less smoke (and more heat) and so baking irons and griddles were designed to be suspended at height over the fire from a half-moon shaped handle – these were the Scottish Girdle and English Griddle.

These hanging griddles were hung using an eye from hooks or directly from the ‘fire jack’, also known as a trammel or pot-hook, or from a more elaborate wrought iron pot-sway or pot-crane. This also meant other hanging cooking pots (with a similar hanging design) could be easily interchanged over the fire. 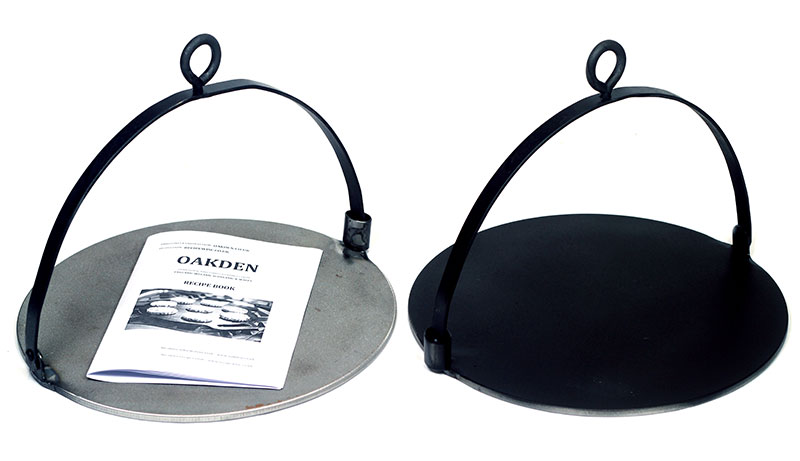 By the 1800s and early 1900s better quality fuel available to most places, coupled with better designs of cooking pots, pans and baking irons, from new industrial techniques, (with better trade and greater migration of people from regions) saw the beginnings of a ‘standardisation’ of cooking pots, pans and baking irons; using either the hanging design with a half-moon collapsible handle, over the fire, or the flat long-handled griddles on the new ‘cooking range’.

The most easily identifiable region of a particular bakestone comes from Wales, this classic design is closest to the old stone shape used for thousands of years to cook on. It was cast in a single flat mould from molten iron with no separate handle, (the handle shape was designed into the mould). While bakestones from Scotland, Ireland and England (and also found in Wales) all have similar design features. We have sourced original Bakestones and old photos of bakestones from these three regions and most of these have a separate cast iron plate to cook on with a half-moon shaped handle separately riveted on, with a round eye at the top, to hang the bakestone from.