One of the earliest and most detailed accounts of the craft of the Comfitmaker (or Sugar Confectioner) in English, is called,‘The arte of comfetmaking, teaching how to cover all kinds of seeds, fruits or spices with sugar’, it was written by Sir Hugh Plat, in his Tudor work, ‘Delights for Ladies’, and first published in 1600. Sir Hugh Plat clearly outlines the method of Tudor production of comfits, and describes the equipment and technique required, (you can read his full account below).

Sir Hugh Plat (or sometimes Platt) was the son of a London brewer, a man of substance and property. Baptised on 3rd May 1552 he graduated from Cambridge with a BA in 1571 and was married twice, with his will being executed on 19th October 1608. As a writer he was published many times during his lifetime, although it was his ‘Delights For Ladies’ for which he is most remembered; the book enjoying multiple re-printings and editions.

Summary Of The Skills Of The Comfitmaker

It is well worth reading the whole of Plat’s original description below, because a very clear image of a professional at work emerges. However, this is a quick summary of the main points. 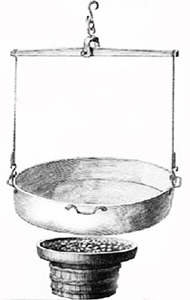 To make Tudor Comfits: First, powdered sugar and water is made into a simple syrup in a heated basin: made from three pounds of double refined powdered sugar to one pint of water. The syrup needs to be runny, and streams from a ladle when poured. Make sure the syrup is kept warm, and pours easily, but do not allow the sugar to discolour or burn. The seeds to be sugar coated are dried by a gentle heat in basin or pan suspended by chains or cords over warm coals. Using your left hand you rub the seeds as they dry to separate them, while your right hand swirls the pan to keep the seeds moving. When completely dry a half ladle of thin syrup is poured into the pan to ‘pearl’ or coat the seeds.

The seeds are once again rubbed with the left hand to separate them and stop them from clumping together, (this obviously is a very sticky job). The pan or basin also needs to be swirled with the right hand, after ladling in the syrup, to keep the seeds moving; this helps them pick up extra syrup, and gain an increase in size; it is also so that they became rounded in shape. You can also move the pan off the warm coals to allow the sugar to dry when fully coated. Keep swirling and rubbing.

Once dry from this first coat, give them successive coats or ‘charges’ of this simple syrup, (with a full ladle) until they take on larger spherical or elliptical forms – created by stirring the seeds in the pan constantly, round and round, above a low heat. This process creates comfits known as smooth, pearl, or plain round comfits. Caraway seeds for example are good after 12 charges.

If the syrup is heated to a higher boiling point, to what Plat called a higher ‘decoction’, then the comfits become rougher in texture, and are known as ragged, or crisp comfits. The comfits are usually fully dried after every tenth charge, in a cool oven after the bread has been baked, on a stove or sometimes, as Plat recommends, in the sun. At first the sugar coating is grey, but by allowing them to dry in this way it has the added effect of whitening them. To get larger sized comfits they are then coated with more charges.

Ingredients To Comfit: Although sugar coated caraway, coriander, anise and fennel seeds were the most popular comfits, many other food items were also made into comfits. Small slivers of cinnamon and other spices were made into ‘long comfits’; and comfits of dried fruits, such as oranges, lemons, cherries, currants and raspberries, were also popular, as were rings of preserved angelica stem.

Plat also recommends giving the seeds a soft paste first, a sugared, cinnamon and ginger spiced breadcrumb mixture brought into a paste using borrage water. Then charged as normal with the syrup coats to make comfits.

And unless white comfits were required for display, highlighting the purity of the sugar used, colourings were also added to the syrup – put into the last few coats of sugar charges. In Plat’s Tudor period ‘saunders’, (from ground sandalwood) was used to create red comfits; while spinach or beet juice from beet leaves were used to make a light green colour, and saffron was used for yellow and gold.

The arte of comfetmaking, teaching how to cover all kinds of seeds, fruits or spices with sugar

“Choose the whitest, finest and hardest Sugar, and then you need not to clarifie it, but beate it onlie into fine powder that it may dissolve the sooner. But first make all your seeds very cleane, and dry them in your hanging bason.”

“Melt your sugar in this manner, viz. Put three pounds of your powder sugar into the bason, and one pinte of cleane running water thereunto, stirre it well with a brasen slice, untill all be moist and well wet, then set it over the fire, without smoke or flame, and melt it well, that there bee no whole gristie sugar in the bottome, and let it seeth mildely, untill it will streame from the ladle like Turpentine, with long streame and not drop, then it is come to his decoction, let it seeth no more, but keep it upon hote imbers that it may run from the ladle upon the seeds.”

“To make them speedily. Let your water be seething hot, or seething, and put powder of Sugar unto them, cast on your Sugar boiling hote: have a good warme fire under the hanging bason. Take as much water to your sugar, as will dissolve the same. Never skim your sugar if it bee cleane and fine. Put no kinde of starch or Amylum to your sugar. Seeth not your Sugar too long, for that will make it black, yellow or tawnie. Moove the seeds in the hanging bason as fast as you can or may, when the sugar is in casting.”

“At the first coate put on but one halfe spoonfull with the ladle, and all to move the bason, move, stirre and rubbe the seeds with thy left hand a pretty while, for they will take sugar the better, & dry them well after every coate. Doe this at every coate, not only in moving the bason, but also with the stirring of the comfits with the left hand and drying the same: thus dooing you shall make great speed in the making: as, in everie three hours you may make three pounds of comfits. And as the comfits doe increase in greatness, so you may take more sugar in your ladle to cast on. But for plaine comfits let your Sugar be of light decoction last, and of a higher decoction first, and not too hote.”

“For crispe and ragged comfits, make your sugar of a high decoction, even as high as it may run from the ladle, and let fall a foote high or more from the ladle, and the hoter you cast in your sugar, the more ragged will your comfets be. Also the comfets will not take so much of the sugar as they will upon a light decoction, and they will keepe their raggednesse long. This high decoction must serve for eight or ten coats in the end of the worke, and put on at every time but one spoonfull, and have a light hand with your bason, casting on but little sugar.”

“A quarter of a pound of Coriander seeds, and three pounds of sugar will make great, huge, and big comfets. See that you keepe your Sugar alwaies in good temper in the bason, that it burne not into lumps or gobbets: and if your sugar bee at any time too high boiled, put in a spoonfull or two of water, and keepe it warily with the ladle, and let your fire alwaies bee without smoke or flame.”

“Some commende a ladle that hath a hole in it to let the Sugar run through of a height: but you may make your comfites in their perfect forme and shape only with a plaine ladle.”

“When your comfits bee made, set your dishes with your comfits upon papers in them before the heat of the fire, or in the hot sun, or in an Oven after the bread is drawne, by the space of an houre or two, and this will make them very white.”

To make Cherries in confection.

Take ripe and chosen cherries, cut of half the stalks and put them in a frying pan over a soft fire, for every pound of Cheries strew upon them a pound of good white sugar in pouder, seeth them so till the third part be wasted, when they are sod put in a little Rosewater with a few cloves, and sinamon beaten togither, then let them coole two or three houres, and then put them into your pots.

To make Prunes in confection.

Take Prunes of damaske & do like with them as you did with cheries, save that for every pound of Prunes take xii. ounces of sugar, and that there must be wasted the fourth parte of the sirrup awaye, and that the Cloves and Sinamon must be but half brused, or els both be a like.

Posted in All Recipes.
Share
←  NewerEllen-Ealu (Elder-Ale)
Older  →Food In The Hobbit