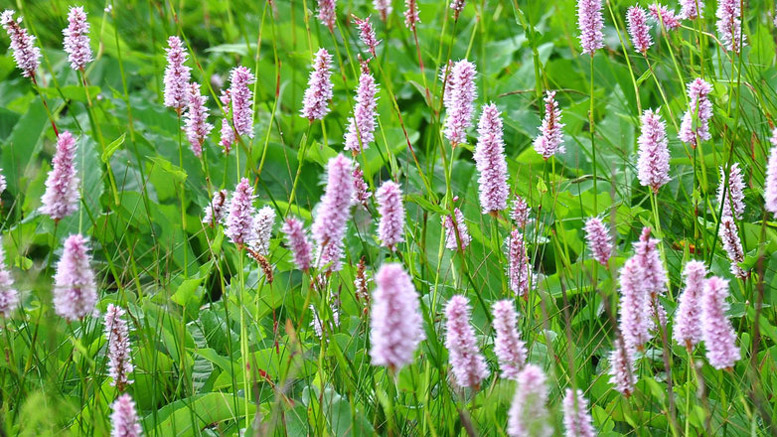 This savoury pudding is made using the young leaves of the Bistort plant. Easter-Ledge Pudding, or Dock Pudding, is a traditional Cumberland, Lake District and Yorkshire dish served at Easter and during Lent, (it is sometimes also known as Passion Pudding, Herb Pudding or Bistort Pudding) bistort leaves are commonly cooked with onion, oats, barley, butter and eggs, (various regional recipes also use other hedgerow leaves and ingredients).

It is served as a side dish with lamb at Easter; from April through to May; and at other times eaten with fried bacon, eggs and potatoes. At this seasonal time many of the local villages in Northern England hold competitions to find the best tasting Easter-Ledge (or Dock) Pudding – Hebden Bridge, in the Calder Valley, being the most famous competition. The regional recipes and local traditions of this pudding go back hundreds of years, closely tied to the common Oatmeal Pottage – it is a dish which is traditionally eaten on ‘Passion Sunday’, the fifth Sunday in Lent.

Bistort: is a perennial plant which flowers from June to August, (although it is the younger, tender leaves and shoots which are used in cooking from April). It is most commonly found growing wild in meadows and on grassy roadsides in the north-west of England. It is sometimes known locally as ‘Easter Giant’ and as ‘Passion Dock’, hence the other names for this pudding. The leaves and young shoots may be boiled and eaten as a vegetable, the roots take much more boiling and were eaten in times of hardship.

Regional Differences In Recipes: Some Easter-Ledge Puddings are made with other leaves of various hedgerow plants (kale etc.) added into the muslin cloth to boil, although Bistort is the main leaf ingredient of all the variations. Some recipes add barley, some oatmeal, some both, some add hard-boiled egg, others add dandelion and other edible wild growing flower heads. A few recipes also add in a handful of dried fruit like currants or raisins. As in the recipes below Easter-Ledge Pudding is either served directly from the pudding cloth in some recipes, while other recipes fry off the pudding in little ‘cakes’ before serving.

First wash and chop up finely the Bistort and Nettle leaves add them to a mixing bowl and mix in the onion finely chopped and the soaked pearl barley (drained). Once mixed add this to the centre of a muslin bag or cloth. Sprinkle over some sea salt and black pepper.

Gather up the cloth, pack the pudding into the shape of a ball, twist the excess cloth gathered in at the top, and tie the opening to the muslin bag tightly shut with string.

Place this, fully immersed, in a saucepan of water, already brought to the boil, turn the heat down, put on the lid, and simmer for 2 hours.

After boiling for two hours leave the Easter-Ledge Pudding to drain.

In a mixing bowl, beat together the softened butter and the egg, then thoroughly mix in the boiled ingredients from the muslin bag (drained). Add in some extra sea salt and pepper to season, stirring it in.

Traditional: Place this finished pudding mixture into a serving bowl and serve to the table.

Optional: Stir in the oatmeal, to stiffen the mixture – take a large spoon full of the finished pudding mixture and shape into small ‘patties’ or ‘cakes’ – fry these off in a frying pan, on each side, in a little butter, lard or bacon fat.

First wash all the green leaves, then chop them up finely and add them to a mixing bowl (with the cleaned and trimmed dandelion flower heads – chopped fine – if adding). Mix in the onion finely chopped and the soaked pearl barley (drained). Once mixed add this to the centre of a muslin bag or cloth. Sprinkle over some sea salt and black pepper.

Gather up the cloth, pack the pudding into the shape of a ball, twist the excess cloth gathered in at the top, and tie the opening to the muslin bag tightly shut with string.

Place this, fully immersed, in a saucepan of water, already brought to the boil, put the lid on, turn the heat down and simmer for 2 hours.

After two hours – Hard-boil 4 of the eggs, allow to cool, shell, chop them up and reserve for later.

In a mixing bowl, beat together the softened butter and the remaining 4 fresh eggs, then mix in the boiled ingredients from the muslin bag (drained) and add in the oatmeal. Lastly add in the chopped hard-boiled eggs and mix thoroughly together. Season with some extra sea salt and black pepper. If the mixture is a little wet add some more oatmeal to stiffen it.

Heat a frying pan, add some butter, lard or bacon fat to it and take a large tablespoon of the Easter-Ledge Pudding mix, shape it into little flat cakes and fry, for a couple of minutes on each side. Then serve.

‘A Taste of The Lake District’, by Theodora Fitzgibbon’, Published 1980

Method: Chop the greens and onion finely and sprinkle the washed barley among them, adding the salt. Boil in a muslin bag for about 2 hours. Before serving, beat the mixture in a dish with 1 egg, a large knob of butter, salt and pepper (some people mix in a cup of oatmeal at this stage), then make into a cake and fry in fat.

‘Recipes Of Lakeland: Collected By Cumbria‘, Published in 1966

Method: Remove stems of Easter-ledges and chop well together with young nettles and onion, wash the barley and sprinkle this in among the greens adding salt. Put all together and tie up in a muslin bag and boil for one and a half to two hours. Before serving beat it up in a dish with one egg and some butter (or bacon dripping is excellent) flavour well with salt and pepper.

Method: Chop all the vegetables, tie in a muslin bag with the barley and boil for 2 hours. Turn into a casserole and season. Add beaten egg and a good dab of butter. Serve piping hot.

Alternative method: Boil barley first, then tie in a bag with the chopped vegetables, boil for 1/2 hour and finish as in first method. This is excellent and can, of course, be adapted to another herb and the vegetables you have.