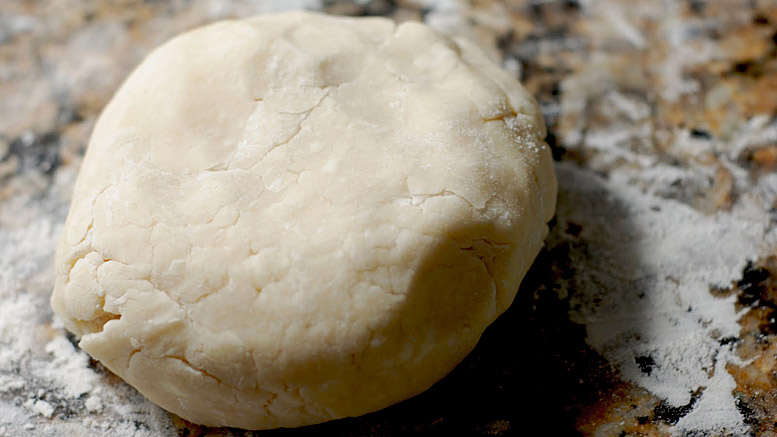 Medieval Pastry Dough - Eaten Or Not?

Medieval milling and boulting methods were never wholly successful in removing all of the bran from the grain, even the best flour produced in this period was an ‘off-white’ flour, rather than the pure white flour produced today by industrial roller milling. The best ‘extraction’ rates that could be achieved is thought (by the Miller’s Guild and other experts) to be around 80%. Yet this whiter flour, described as the ‘finest’, was desired by Medieval and Tudor bakers because it made a lighter bread loaf, of a finer texture, and was sold at a premium (making the Manchet Bread).

This finest grade of flour was more expensive because it involved additional boulting processes, and because a proportion of the grain (bran etc) was discarded, so that more grain was needed to produce the same amount of flour – in a 1588 Manchet Recipe, the author explains this type of flour was boulted twice, “Take two peckes of fine flower, which must be twice boulted”. Therefore, this whiter flour became a status symbol for those who could afford to make their bread with it. And although some contemporary writers describe this flour as ‘white as snow’ this is probably a romanticised description, the flourish of a writers pen, the best flour was still an off-white colour, but it was certainly far more bright white and expensively fine graded than the normal flour and breads being sold.

Much of the flour, and therefore bread and pastry, made in medieval Britain and Ireland was of a mixed grain and pea/bean variety, (making the Maslin Breads). A contemporary writer in the reign of Elizabeth the First (from Harrison, ‘Elizabethan England’, 1890) wrote that bread was, “made of such grain as the soil yieldeth. The gentility commonly provide themselves sufficiently of wheat for their own tables, whilst their household and poor neighbours in some shires are forced to content themselves with rye or barley, yea, and in time of dearth, many of bread made with either of beans, peas, or oats, or of all together and some acorns among.”

L. A. Moritz in his 1958 work, “Grain-Mills And Flour In Classical Antiquity”, said this about the production of flour and the refined quality of it in the Medieval and Tudor periods, “… the flour for this bread was ground on rotary stone mills, driven by wind or water, or on the hand-quern; and it was sifted, if at all, through a single sieve which could eliminate only the coarsest of the bran … the real advance could not take place until the roller-mill [20th Century] with its cutting action came to replace the crushing action of the old milstones”.

In Britain and Ireland you can still purchase flour produced by a traditional local miller, still operating small-scale surviving wind and water mills, (which are hundreds of years old) and who produce an authentic ‘80%’ extraction stoneground plain white flour, the best that could probably have been produced, until far more of the bran could be removed with better technology and equipment.

Some people argue that by repeated boulting you can achieve a greater extraction rate and a whiter flour for the Manchet Breads. This is true, but the Miller’s Guild argue that the extraction rates are also limited by the equipment and technology of the day, and the fact that each time you refine the flour it becomes more and more expensive, with a greater wastage occurring. So 80% was probably the acceptable finest boulting grade of Medieval or Tudor flour, even for the very rich households.

See the next pages in this article which discusses the composition of Medieval Flour and how to approximate it in the modern kitchen.

Medieval Pastry is perhaps the most misunderstood kitchen and food staple of this period. Should Medieval pastry be eaten? How should it be cooked? What is an authentic pastry recipe? All good questions, but with the almost total absence of fully explained pastry recipes from medieval sources it makes it difficult to resolve these questions one way or another – pastry was so commonly made that it was taken for granted as one of the things all cooks should know, and therefore not important enough to be written down in the earliest manuscripts.

Equally obvious during this time was the fact that different types of pastry was used for different types of dishes and design effects, and it was left to the cook to fall back on their knowledge in this area to decide on what was needed. Yet this also helps us, as a result of this common shared history, the most basic pastry recipes have varied very little in time, and in knowing the main building blocks we need to concern ourselves with just three types of ‘pastry’: a ‘plain pie crust’ a ‘hot-water crust pastry’, and perhaps a more controversial ‘basic shortcrust pastry’. Examples and recipes for these three pastries are given later; but essentially a basic ‘pie crust’ is made with just flour and hot water, while a ‘pastry’ is made with the inclusion of fats, i.e. milk, lard, butter, suet or eggs etc. and it is made either hot or cold: as always the grade of the ingredients used in the pastry depends upon the economic status of the cook or the household.

A lot of false assumptions about medieval pastry is written on the Internet, assumptions coming from poor research and writing, which has unfortunately been propagated from just a few modern sources. From what little information there is in the medieval period (1066-1485 AD) about pastry, there is only one conclusion to draw, namely there is no ‘one’ pastry recipe or pie making ‘technique’ right for all occasions. If anyone says anything different, just ask them to show you the original recipe … the very earliest recipes for British pastry were written down in the later Tudor period, as in Thomas Dawson’s book, ‘The Good Houswife’s Jewel’, first published in 1596.

See the next pages in this article which discusses the composition of Medieval Pastry and how to approximate it in the modern kitchen.