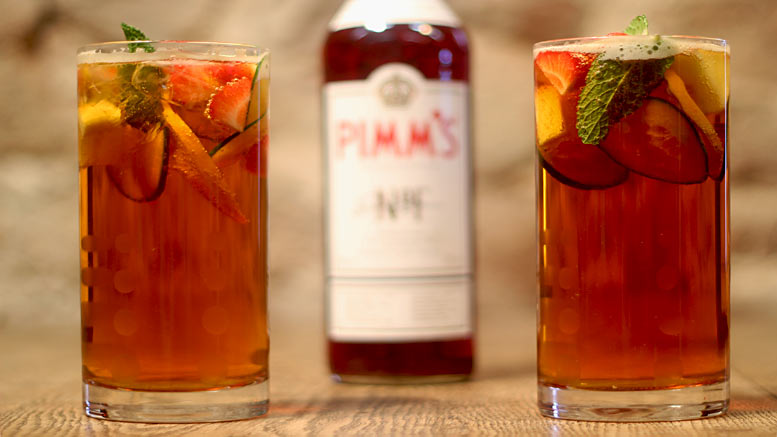 In 1840 the owner of a London oyster bar, James Pimm, first invented and sold his thirst-quenching cocktail, (the original Gin-Sling). Using gin, quinine, and a secret mixture of herbs and botanicals, Pimm initially served up the brew as an aid to digestion, dishing it out in a small sized tankard called the ‘No1 cup’, hence the name, “Pimm’s No. 1 Cup”, was born.

Today in the UK a Pimm’s Cocktail is a very popular drink in the Summer time; and its popularity is increasingly spreading across the world; helped no doubt by it’s (modern) close association with world famous sporting events like the Henley Regatta and Wimbledon’s All England Lawn Tennis Club Championship.

A Pimms Cocktail is an excellent thirst quencher, (diluted with lemonade and chilled with ice cubes) while the traditional fruit added gives a very summery feel to the drink. The botanicals (made to a closely guarded secret recipe since 1840) added in to this Victorian drink give it a very subtle and gentle ‘peppery’ taste, which you should try not to *muddy too much when making (*see the notes at the end of this recipe). 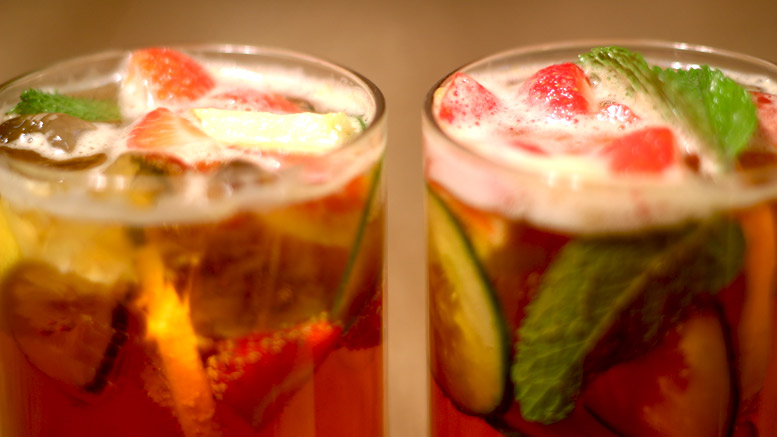 Traditional Herbs and Fruit To Use: depending on the recipe use a combination of orange, lemon, apple, strawberries, cucumber and sprigs of mint. Cut the fruit up into a combination of thicker wedges and thinner slices. Using both slices and wedges gives the drink a much more varied and attractive look. Three of the most common and traditional recipes are given below – note: Cucumber and Mint are essential elements in any Pimm’s.

Three Of The Most Traditional And Popular Pimm’s Recipes

1. The Original Victorian Pimm’s: Use only Orange, Lemon, Cucumber and Mint. Make it stronger, do not dilute the Pimms more than one parts Pimm’s to two parts traditional lemonade.

2. The Classic Early 20th Century Pimm’s: Use only Strawberries, Orange, Cucumber and Mint, make it one part Pimm’s to three parts clear lemonade.

In any of the Pimm’s recipes above try not to overload the amount of fruit used in the glasses served, one slice or wedge of each fruit and one sprig of mint is enough. 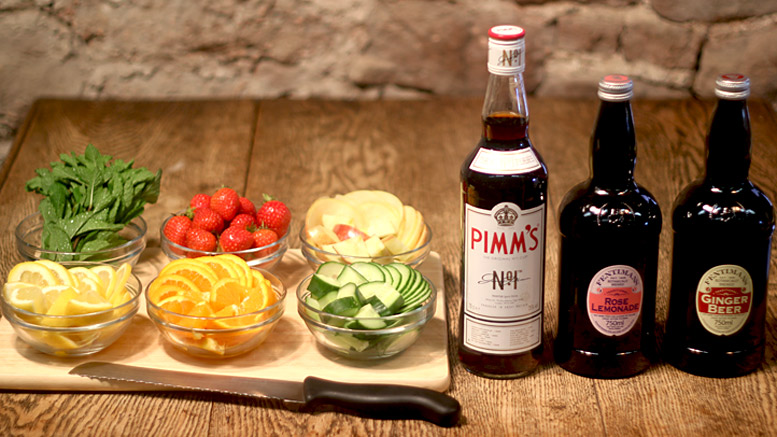 Ingredients For A Pimms Cocktail

Traditional Drinks Used: Pimm’s, the original No1 Cup, and Lemonade. Add  three parts lemonade to one part Pimm’s No1 Cup (no weaker, ice is added and today Pimm’s is made and bottled with a much lower alcohol content than it was years ago – see the notes below).

The Garnish: Make sure that each drink has at least one of all the separate ingredients of mint and fruits added and poured in (depending on the recipe) and stirred – this is easy to do if making each glass singly, but harder to do if serving from a jug. 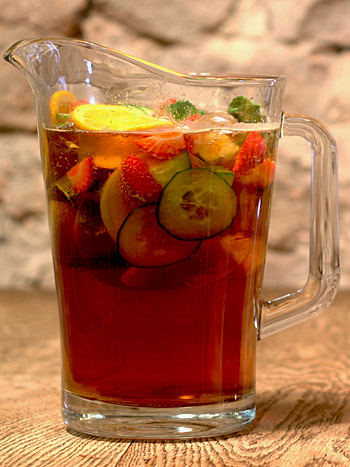 A Large Jug Of Pimms Cocktail

Notes: There is a confusion that you need more than just a bottle of Pimm’s to make the authentic cocktail, Pimm’s is bought in the bottle as a ready made cocktail (a blend of drinks, herbs and spices) so there is no need to add anything else alcoholic like gin etc. only lemonade. Other recipes claiming to be original may call for the adding of different fruit, i.e. grapes or berries etc. there is no harm in adding these, although by adding in too much fruit (especially soft or exotic fruit) it is altering the basic nature of the authentic cocktail, and in all honesty this can ruin it. Stick to the classic ingredients and be aware that the drink must include the cucumber and mint.

A large jug of this Pimms cocktail (containing ice to keep it chilled) is often served so people can top up their drinks when needed. The company bottling Pimm’s has changed the alcoholic content down from 40% proof to just 25% proof, so to get the authentic taste do not mix in more than two or three parts lemonade to one part Pimm’s, especially if ice is being used, (following an older recipe calling for more lemonade will seriously weaken the drink).

Adding in other drinks, like gin, to boost the alcoholic content dilutes the blend of herbs and spices (botanicals) used in Pimms, and it muddies the original taste, so use less lemonade instead. Pimm’s have also introduced different varieties of their classic drink, i.e. one called ‘Winter’, the old No3, however, it is the traditional No1 Cup bottle that you need for this summer drink.