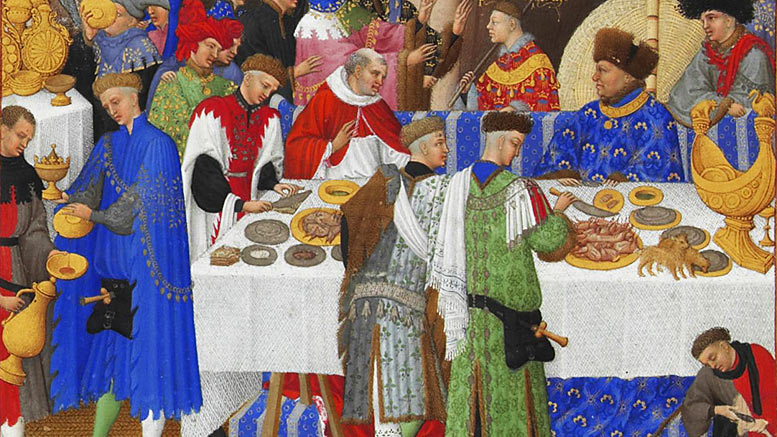 To understand the complicated world of manners and etiquette at a medieval feast we must turn to two extant sources, “The Boke of Keruying”, (The Book of Carving) by Wynkyn de Worde, printed in 1508, and the work it was compiled from, an earlier manuscript written by John Russell, in around 1430, the “Boke of Nurture”. Together these two works are some of the best sources from the Middle Ages in helping us to understand the intricate rituals of serving and eating meals in the great houses of the late Medieval and early Tudor periods in Britain. For Medieval Recipe Manuscripts see our Online Library.

Among other manuscripts of this type they explain in great detail how to set out a feast, and the skills needed by the servers and carvers who waited on the tables, (these manuscripts were also intended as a handbook for the well-born boys of the rich households, ‘pages’ who helped serve the most important guests).

The Book of Carving lists the rules and customs which should be followed by those preparing and by those serving the dishes: it includes everything from the hand washing ceremonies to the exact placement of the trenchers (bread plates) by the carver, who could only touch the food with his left hand, by a thumb and two fingers etc. – rules which no doubt increased in elaboration and complexity from 1250 to 1550 A.D. (and thus the need for a printed handbook in circulation by 1508).

“Place the salt on the right side of your Lord’s seat, and the trenchers to the left of the salt. Then take the knives and arrange the loaves of bread side by side, with the spoons and napkins neatly folded by the bread. Cover your bread and trenchers, spoons and knives, and set a salt cellar with two trencher loaves at each and of the table … then serve your Lord faultlessly.” From, ‘The Book of Carving’, Wynkyn de Worde, 1508.

However, what we also have in The Book of Carving is sometimes confusing or conflicting advice – rules which are not written down in the order of carrying them out, or methods which are not completely explained; for example many of the basic things (obvious things to a Medieval and Tudor audience, practices which were taken for granted) are just omitted as a waste of manuscript space. In these situations we must rely on other sources and on common sense.

What also must be noted is that scholars today are unsure how widely read these types of manuscripts, (on etiquette and manners) were, and thus how far they were fully observed at a feast. Clearly following all the intricate and time consuming customs and rules outlined in them must have been for very special and formal occasions, undertaken by very highly skilled and trained servants – an example of this work can be seen in the image of the painting above (of the Twelfth Night feast held by the Duke de Berry) see the Carver, dressed in green, going about his duties.

“To perform his duties successfully, the carver had to absorb a very extensive body of specialised knowledge, for each cooked joint, bird, fish or bakemeat [pies] which arrived on the table had to be carved in its own particular way, using its distinctive carving term, and its appropriate accompaniment, syrup, sprinkling or sauce.” Peter Brears, in the introduction to “The Book Of Carving”, 2003, published by Southover Press.

We must also remember that cleanliness, table manners and etiquette were not just for the rich, “Peasants also washed their hands [and utensils] after eating, (and, one supposes, sometimes before eating as well), since one ten-year-old boy drowned himself in a market place trough in which he was washing his hands and bowl after eating.” Peter Hammond, “Food & Feast In Medieval England”, 1993, published by Sutton Publishing.

Creating an elaborate medieval feast took a large team of dedicated kitchen and serving staff. For example there were 57 cooks and 115 scullions, spit-turners and other assorted staff to serve and feed 2000 guests, (in two sittings, and in three chambers) at the feast for the enthronement of George Neville as Archbishop of York in 1466. And far from a medieval feast being a shambolic affair, a ‘free-for-all’, everything was done with deliberate care and attention.

“It might seem that eating at a medieval table called for nothing more than knowing how to use a knife, spoon and fingers (forks had yet to come). In fact the process was as fraught in terms of proper behaviour as any Victorian dinner party. Far more than today, eating and drinking provided a primary framework for conversation and conviviality, and the importance of every gesture at table was thus enhanced.” From ‘Feast: A History Of Grand Eating’ by Roy Strong, 2002, published by Jonathan Cape.

Within a medieval feast there was always plenty of food and a multitude of dishes within each of the courses; although the amounts of food in each course was portioned out appropriately between the guests, (guests were numbered within a set ‘mess’, a mess was between 2 to 6 people sharing the food placed in front of them – it is also where we get the phrase ‘mess hall’ when referring to large communal dining areas).

Some of the great European Banquets had up to 7 courses, and truly wondrous entertainments as interludes between each course, however 3 courses was normal at a British feast, with a mixture of foods and individual dishes being presented. Each of the three courses could have a mixture of meat and fish ingredients, sweet and savoury foods – it was not until later that that the courses, and types of food served in each, were separated, ending up with what we have today: a ‘starter’, a main course, and a dessert course.