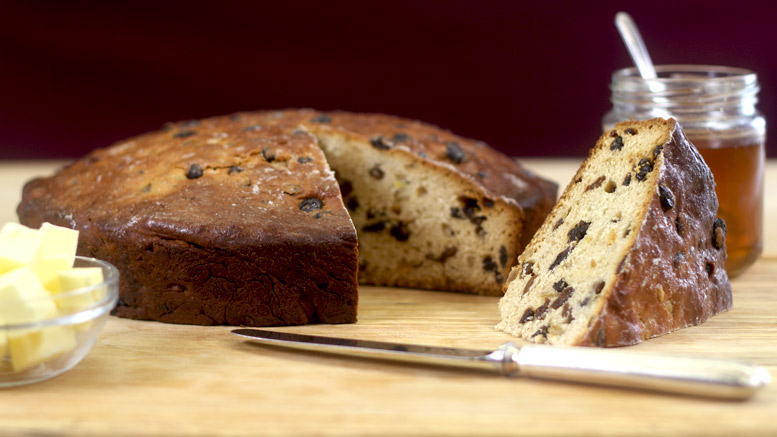 This is a very traditional Irish recipe for a Barm Brack, (Báirín Breac) a delicious fruit bread, where the name Barm is the old word for yeast. A barmbrak is eaten all year round, but particularly at Hallowe’en when it has a little gold-ring and a small silver-coin baked into it. It was thought that whosoever gets the gold ring, would be married within the year, and the person who found the coin would become rich. For children growing up in Ireland, a slice of this traditional fruit loaf  (hiding lucky charms) was a very common thing to receive when out trick or treating at Halloween.

As far as Celtic bonds go, the old Irish name for this loaf, Báirín Breac, means Speckled Bread, which is similar to the Welsh fruit loaf, Bara Brith, whose name also translates into English as the same. Another Irish variation on the Barmbrack is called a Tea Brack, which uses either baking powder or bicarbonate of soda to make it rise, instead of the yeast. Yet while a Tea Brack is commonly baked in a loaf tin, in terms of the shape of the more traditional barmbrack there is no one common form. Some Irish people and regions bake it in loaf tins, others bake it in a round cake tin, while yet others bake it free standing on a baking sheet. We are choosing to bake ours in the more popular round shape – in a large, round bread-baking tray.

This recipe makes a good sized loaf for any occasion. Stale barmbrack is toasted and eaten with butter or traditionally revived by sprinkling it over with a little stout or ale, which goes surprisingly well with the fruit in the loaf.

Sift the flour, spices and salt together into a large mixing bowl, then rub in the butter until it forms a breadcrumb mixture. Add the sugar (baring a teaspoon) to the flour mixture and blend it in well.

Cream the yeast with 1 teaspoon of sugar and the warm milk. This should, over a few minutes, froth up as the yeast starts to multiply. If the yeast is old and stale it is no longer active and will not froth. Once it froths up beat the egg into the yeast and milk mixture. 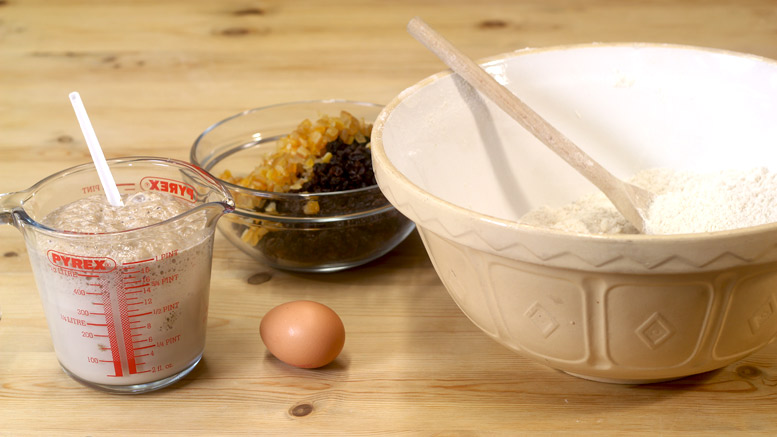 When ready pour the warm milk, yeast and the beaten egg into the flour mix. Beat well with a wooden spoon until a dough is made. The batter should become stiff but still elastic – add in a little extra flour if it needs it. Fold in the dried fruit and chopped peel so that the dried fruit becomes thoroughly mixed throughout. Knead a little with floured hands on a floured work-surface.

Place the worked dough in a clean bowl and cover with a cloth. Leave in a warm place until the dough has risen to twice the size – depending on the warmth of the room it can take from one to three hours. 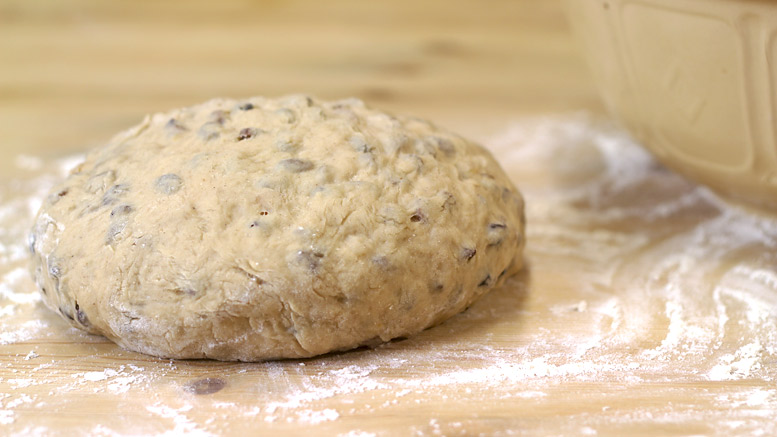 After it has risen turn out the dough give it a little knead to knock it back and then either place it shaped into a large greased bread tin, or shaped onto a greased baking sheet, or divide the dough into two portions and place into two greased 18cm cake tins or two 1lb loaf tins. If making at Halloween add in a little gold ring and a silver coin (cleaned!) – they should be placed in the dough at this stage. Cover the dough over again and leave to have its second rise for about 30 minutes. 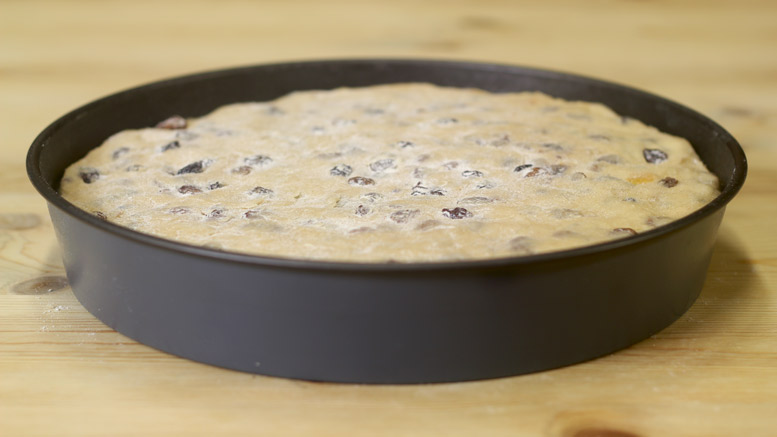 Bake in a moderate to hot oven (200C) for about fifty minutes to an hour (50 to 60 minutes). Test with a skewer before taking out of the oven. When baked glaze the top of the barmbrack with 1 tablespoon sugar, dissolved in 1 tablespoon of boiling water from the kettle (brush it over) and put it back in the hot oven for about 3 minutes to harden the glaze. Turn it out to cool on a wire tray, and when cool serve in slices with butter. Barm Brack keeps well, but if it does get stale it is very good toasted and served with butter, or soaked with a little ale, stout, or beer to revive it. 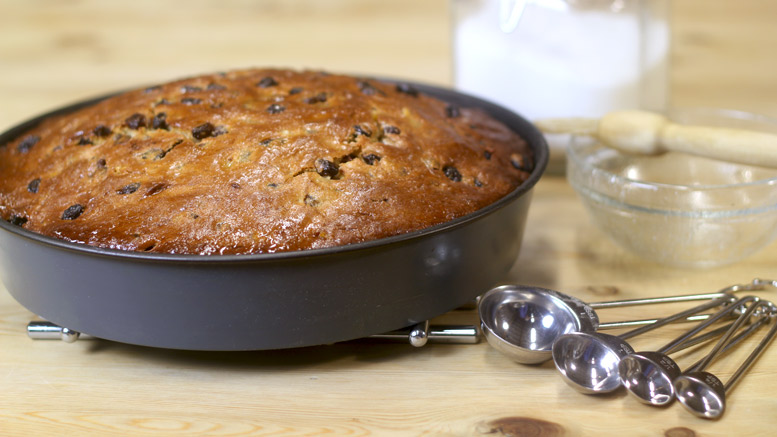 Brushing On The Sugar Glaze

Full Halloween Tradition: Although today either just the coin or ring is placed into a barmbrack dough before baking, the full superstition goes … into the barmbrack were placed a pea, a small stick, a small piece of cloth, a small coin, and a ring. Each item, when received in the slice, was supposed to carry a meaning to the person concerned: the pea, the person would not marry that year; the stick, would have an unhappy marriage or continually be in disputes; the cloth, would have bad luck or be poor; the coin, would enjoy good fortune or be rich; and the ring, would be wed within the year.