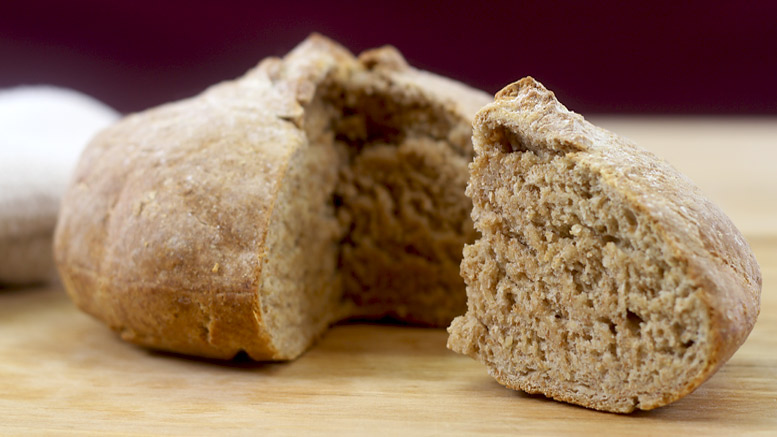 This is a traditional recipe for an Irish Soda Bread recipe, one of the simplest and quickest of all the breads to make. A soda bread is delicious with soup, or spread with a little butter and cheese – it is such a rustic bread that anything which is hearty will go well with it, and it can be made and served to the table in just under the hour. Soda Bread in Ireland is also called a bastable cake, from the name of the cooking pot it was often baked in (a Bastable Pot) and the traditional cross cut into the loaf before baking is so that it can be quickly torn into quarters and served. As such it is better to make two smaller loves than one big one; the recipe below will make a smaller loaf than the original recipes at the end of this page, which are double the size.

Regional Differences: There are regional differences to an Irish Soda Bread, see the end of this page for more regional recipes, one of the main additions is a tablespoon of black treacle to the recipe – this gives the bread another dimension again, particularly to the crust.

Try to make and get the bread dough into the pre heated oven as quickly as you can.

Into a large mixing bowl sift in the flours, salt and bicarbonate of soda and stir to mix in thoroughly. 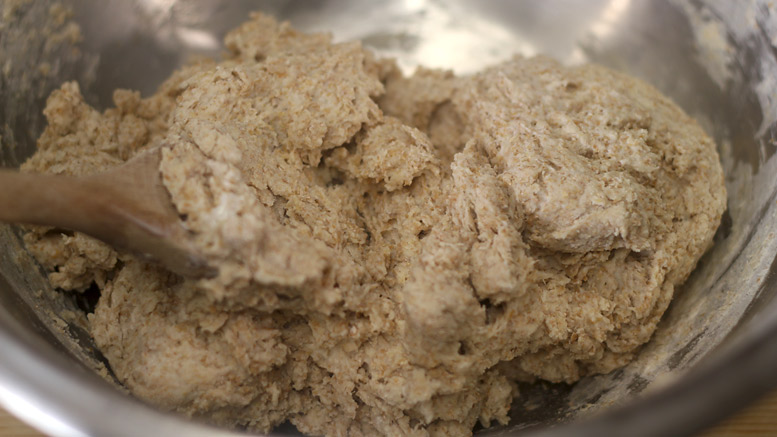 Make a small well in the centre of the flour and pour in the buttermilk. Use a wooden spoon and quickly mix to form a soft dough – (then mix in the optional black treacle if using). Depending on the flour you may need to add a little milk if the dough seems too stiff, (but it should not become too wet or sticky).

Turn the dough out onto a lightly floured surface and gently knead briefly. Just hold the corner of the dough with one hand and gently push the dough a way from you, just a few inches, then regather, give the dough a quarter turn and repeat. Add a cast of flour if it needs it so that the dough is silky, not sticky. 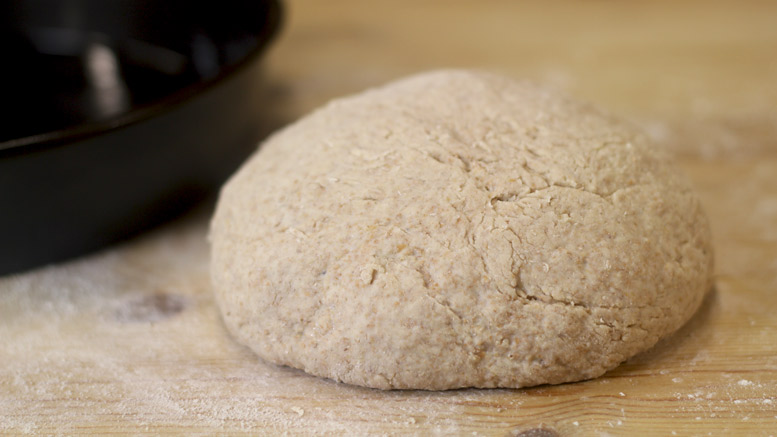 The Irish Soda Bread Dough After Kneading And Ready To Bake

Form the dough into a round shape, and then flatten the bottom of the dough. Place the ball of dough onto a lightly floured baking sheet. Sprinkle a little flour on the top. Then cut a deep cross on the top with a sharp knife (but do not depress the dough too hard) and then bake for about 30 minutes – or until the loaf sounds hollow when tapped. Cool the Irish Soda Bread on a wire rack for half an hour. Serve.

Irish soda bread is one of the specialities of Ireland and is still baked in many homes all over the country. Soda bread is made in loaves of white or brown, the brown being made from whole-wheat flour. Classically, soda bread should be cooked in a ‘bastable oven’ – a pot oven with handles, lid and three short legs for standing at the side of the hearth or suspended by chains. Therefore in some parts of west Cork soda bread is known as Bastable Cake.

Sieve the dry ingredients and rub in the butter. Add the rest of the materials and mix lightly without over-working the dough. Weigh into 1 lb (500g) pieces and mould round; flatten a little and place on to a greased baking sheet or in a greased and floured hoop. Wash with a brine made from 1oz (30g) of salt to 1 1/4 lb (625 ml) of water. Dust heavily with flour and cut into four without separating the pieces. Bake at 440F (230C).

This quantity will make 1 large loaf or 2 small ones. Mix all the dry ingredients together in a basin and make a well in the centre. Add enough milk and stir with a wooden spoon to make a thick dough. The milk should be poured in large quantities rather than spoonfuls, the mixture should be loose but not wet and the mixing done lightly and quickly. Add a little more milk if it seems too stiff. With floured hands put on to a lightly floured board or table and flatten the dough into a circle of about 1 1/2 inch (4cm) thick. Put on to a baking sheet and score a large cross over it with a floured knife; This will ensure even distribution of heat. Bake in a moderate to hot oven (200C – 400F – gas 5) for about 40 minutes. Test the centre with a skewer before removing from the oven. To keep the bread soft it is wrapped up in a clean tea-towel.

Follow the same method as above for ‘white’ soda bread but use 1 lb (500g or 4 cups) whole-wheat flour and 1/2 lb (250g or 2 cups) plain white flour. A little more milk is used to mix the dough. If a brittle texture is required add 1 tablespoon of melted butter to the above quantities. The bread should not be cut until it is quite cold and set – this takes from 4 – 6 hours.